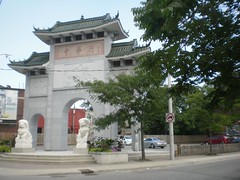 A Top 40 hit when it was released by the Passions, a British group, in 1981, "I'm in Love with a German Film Star", British artist Sam Taylor-Wood decided to record a cover version in 2008. Produced by the Pet shop Boys, the single hit the top of the British dance charts in November 2008.

The song was as much about the performance as anything else. The video's arresting, Taylor-Wood dressed as Marlene Dietrich--top hat, men's suit, long cigarette holder--and holding her legs-crossed position for the length of the black-and-white video, the smoke swirling upwards from the cigarette the only sign that time is passing. Several remixes are out there, but I strongly prefer British expatriate producer Mark Reeder's dreamy Rundfunk remix.

"Rundfunk is "Broadcasting" as in "broadcasting network" (compare Westdeutscher Rundfunk), and the song with its video seems--to me, at least--to be very German, very "European" in the sense of being complex and somehow at once other and accessible. Je l'aime beaucoup.

dewline that I've learned that Canadian astronaut Chris Hadfield will be commanding the International Space Station in 2013.

Hadfield will launch aboard a Soyuz spacecraft late in 2012, Gary Goodyear, minister of state for science and technology, told a news conference Thursday in Longueuil, Que. The exact date of the launch has not been set, but it will likely be in either late November or early December.

In March 2013, Hadfield will take command for the second half of the six-month mission, overseeing the work of five other astronauts.

"To be trusted on their lives … is a tremendous honour that all of us share," he said, calling the opportunity extremely challenging, exciting and rewarding.

It will be his third journey into space.

The Ontario native, who was born in Sarnia and raised in Milton, will co-pilot the Soyuz rocket en route to the space station.

Veteran test pilot Hadfield's first mission in space was in 1995, when he became the only Canadian astronaut to board the Russian space station Mir.

On his second mission, in 2001, he attached Canadarm 2 to the International Space Station (ISS) during the first-ever spacewalk by a Canadian.

Support for Catalan separatism--of Catalonia, not of the wider Catalanophone world including the Spanish regions of Valencia and the Balearic Islands, or the French department of Pyrénées-Orientales--seems to be growing, as Paddy Wadworth wrote in his Foreign Policy article "Madrid's Nightmare".

Zapatero had rashly promised to accept whatever changes the Catalan parliament made to its existing autonomy statute, so long as they stayed within the current constitution. But the most radical changes were watered down by the Madrid parliament, though it did approve Catalonia's desired affirmation of its "preferred" status of the Catalan language, and its full control of over its judiciary. Most significantly, it accepted Catalonia's status as a "nation" in its own right, though it shifted this provision from the main statute to the preface.

But in early July, the Spanish Constitutional Court, responding to a petition organized by the opposition conservative People's Party (PP), ruled that some of the changes violated the constitution and avowed that only it only recognizes "one nation, Spain," dashing Catalan hopes. Popular support for the PP petition campaign revealed that Spanish nationalism, dormant since the dictatorship, remains a key force in Spanish politics.

Yet the court decision provoked what were probably the biggest demonstrations in Barcelona since the transition to democracy. Around a million people took to the streets to protest in favor of increased self-determination for the Catalan nation. They were led by José Montilla, leader of the PSC, the Catalan chapter of Zapatero's party, who described the decision of Spain's highest court as "offensive." The tone of the march suggests that many Catalans who would have been content with even the watered-down statute are now shifting towards demands for complete independence. Montilla was repeatedly abused by pro-independence demonstrators, who appear increasingly to reflect the popular mood.

Economic reasons--specifically, resentment of the Spanish government's transfer of income from Catalonia to the poorer regions of Spain, and the belief that if Catalonia was fiscally independent, at least, it wouldn't have to implement the austerity programs demanded for Spain--also play a role in boosting support for independence. In fact, various polls do seem to suggest that support for Catalonian independence has been growing the past few years. All this may well, as suggested at Geocurrents, lead to electoral breakthroughs for separatist Republican Left of Catalonia in the next elections.

Symbolism matters in federal, multinational states. Events in the past decade seem to have reinforced Catalonia's alienation from the rest of Spain, for reasons as various as the tensions with the Aznar government earlier in this decade and the recent attacks on Catalonia for its ban on bullfighting. While noting that Catalonia's separatists would certainly see advantages for themselves if their region became an independent state and observing that I don't think Catalonia needs to be independent, that there's a contradiction between Catalonia's survival and Catalonia's inclusion within Spain. If the mass of Catalonians are convinced that there is a contradiction, then much becomes possible.

It’s apparent from the book that Blair felt a kinship with his “friend” Chrétien, describing him in warm terms.

“He was a very wise, wily and experienced old bird, great at international meetings, where he could be counted on to talk sense and as Canadians often are, firm and dependable without being pushy,” Blair says.

“All in all, a good guy and a very tough political operator, not to be underestimated,” he says.

Blair was in Canada just as Britain was hit with an outbreak of foot-and-mouth disease and credits Chrétien with immediately identifying it as a serious crisis.

For all his effusive praise of Chretien, he is silent on Martin, suggesting that the personal tie to Canada had disappeared once Chrétien left office.

For all the flak he has taken at home for his perceived kowtowing to the foreign policy agenda of the United States, former British prime minister Tony Blair still thinks there could be no better partner with whom to have a “special relationship.”

This is an overarching theme of Mr. Blair’s newly published memoirs, and one he thinks governments in Canada and Britain alike should internalize as they seek to buttress their countries’ influence in a multipolar world.

“Canada has got to decide – in a world that is opening up, [with] power shifting to the East, where America is looking at its own alliances shifting – what its place is,” Mr. Blair confided in a far-ranging interview in Washington, where he is taking part in the Israeli-Palestinian peace talks.

“You want to maximize the strengths of your relationships, so that in the evolving policy decisions that will determine the future – whether in trade, the economy or security – you’ve got a voice and a say that, looking ahead 20 or 30 years, is bigger than your size will permit you on your own.”

It's worth noting that AZT, the first commercially marketed drug to attack HIV, itself can trace its origins to research into cancer drugs, so this news item isn't that surprising.

The 30-year-long search for a cure for AIDS, the world’s deadliest viral infection, may get a renewed boost from an unlikely source: a little-used Merck & Co. cancer drug.

Researchers at the University of North Carolina in Chapel Hill plan to test Merck’s drug, Zolinza, next year in about 20 people infected with HIV, the AIDS virus. The goal is to determine if Zolinza, or a medicine like it, can force HIV out of cells where it can reside, concealed from attack by potent antiviral treatments, said David Margolis, a professor of medicine who’s leading the research.

While AIDS drug cocktails can eliminate more than 99 percent of virus from an infected person, the treatment isn’t a cure because a remnant of the virus remains hidden in certain cells. For years, scientists have sought a simple way to drive the remaining virus into the bloodstream where the drugs can clear them from the body. Zolinza, approved in 2006 for use against a rare type of blood cancer, may work by blocking an enzyme that helps the virus avoid detection.

“It’s really all about trying to move the field ahead,” Margolis said in a telephone interview. “We don’t expect to cure anybody, but we expect to really show whether it can work the way we think it does in people -- or not.”

Zolinza earned Whitehouse Station, New Jersey-based Merck $15 million in 2008, the last year it disclosed sales of the drug, for treating a malignancy of white blood cells that affects the skin. In a laboratory test published last year, Margolis used the medicine to coax HIV out of hiding in cells taken from infected patients. Now he wants to replicate the result inside the body. Success would show he’s on the right track to finding a cure.

“There is a good chance that it will cause some activation of latently infected cells,” said Robert Siliciano, a professor of medicine at Johns Hopkins University in Baltimore who first identified the cells in which HIV hides out, and isn’t involved in the Zolinza trial. “Nobody knows if it will work, but it’s important to try.”

It will be quite risky, though.

Zolinza targets an enzyme called histone deacetylase, or HDAC, that helps HIV go to sleep in cells by interfering with its ability to replicate. By blocking HDAC, Zolinza would reactivate the virus, kickstarting reproduction.

From there, nature would take its course: HIV would exit and kill its host cell, and enter the bloodstream in search of new cells to infect. Anti-AIDS drugs would prevent it from doing so, and with nowhere left to go, the virus would die after several hours.

Margolis and his colleagues plan to give about 20 patients a few doses of Zolinza, then measure whether it’s had any effect on the amount of virus the immune cells are producing. That will tell them whether they’ve succeeded in disturbing the reservoir.

Zolinza, also known as SAHA, may not be suitable as a cure for AIDS because of its potential to cause genetic mutations that lead to cancer, Margolis said. The U.S. Food and Drug Administration accepts that risk when the drug is being used in patients who already have cancer. It probably won’t tolerate the risk for use in other diseases, Margolis said.

The FDA has approved the trial “because we will so severely limit the exposure to SAHA that the risk of inducing cancer is felt to be negligible, like getting on a plane and taking a flight to New York, or lying on the beach and getting a tan,” he said.