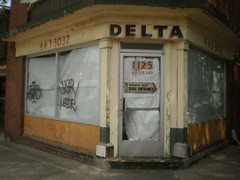 Empty on Gerrard (1)
Originally uploaded by rfmcdpei
One of several abandoned stores that Andrew and I came across on our walk east along Toronto's Gerrard Street just on the border between Riverdale and Leslieville, 1125 Gerrard Street used to house Delta Electric Motor Repair ("please use side entrance").

This news worries me. As I think it should.

The second small asteroid to pass near Earth in a single day will make its closest approach later today, scientists say.

Both asteroids' paths are too far away to endanger Earth or any satellites, said Lindley Johnson, program executive for the Near-Earth Object Program at NASA headquarters in Washington, D.C.

"Even if they were to hit Earth, these two asteroids would disintegrate in the atmosphere," he said. "We'd get a few meteorites out of them, but there wouldn't be any damage to the ground."

Both asteroids were discovered on Sunday by the Catalina Sky Survey near Tucson, Arizona.

The asteroid that created the famous Meteor Crater in Arizona is estimated to have been a bit more than 150 feet in diameter, by comparison.

I've heard it more times than enough this year that people were finding a shortage of staff," Don Cudmore, executive director of the Tourism Industry Association of P.E.I., told CBC News Wednesday.

Some seasonal restaurants have had to close early, he said.

Cudmore said there is always a problem once university students head back to school, but it seems to be worse this year. TIAPEI is trying to come up with a strategy.

"We, as an organization, are looking into ways to basically cross staff, so other industries, other sectors, that are facing the opposite to us," said Cudmore.

"If they had some people that they could put into our sector and then we could help out in other areas, other times of the year. So we're looking at various things like that."

TIAPEI has for years been looking to attract older workers into seasonal jobs. In 2002 a study sponsored by the group identified seniors as an option.

The falling proportion of young on the Island's a problem, as is an EI system that may still encourage some potential workers not to work. Recruiting guest workers is an option, I suppose, although one I'm not sure that the Island's ready for. I have to agree with commenter Rex Mundi that the conditions of employment just aren't very attractive.

If you are going to insist on paying the overwhelming majority of tourism, service and hospitality employees minimum subsistence wages why are you surprised that you end up relying on students who are unavailable in the expanded 'shoulder season' as they return to school?

There's an odd sort of continuity in all this, from gay bathhouse to straight swingers club. Am I entirely wrong in seeing in this a case of heterosexuals capitalizing on the sexual freedoms won so recently by queers, a reversal of that sort of trajectory?

The home of the old Club Toronto, a 122-year-old historical building and an important community landmark as the site of the 2000 Pussy Palace bathhouse raids, will soon reopen as a swingers’ club.

This fall, the building will launch as the Oasis Aqualounge, catering to “sexually adventurous” straight couples and single women.

New owner Toni Johnson took over after Club Toronto closed its doors this past April. The new space, she says, will be “a day and night club, almost like a resort, where you can have a drink and a bite and lounge by the poolside, socialize and dance.” One of the venue’s most attractive draws is the outdoor pool, which Johnson plans to make a key feature of the new club.

“I’m really excited to be in this neighbourhood,” Johnson says, although she admits the building itself was the bigger draw.

“The establishment is magnificent. It’s one of so few historical places remaining, to see it with the baseboards and trim and stained glass,” she says. “One of the defining things for me was that it has a pool and private courtyard. You just can’t get that kind of thing downtown.”

For Johnson, an entrepreneur whose background is predominantly in the software business, the Oasis Aqualounge is a bit of a departure. “When I decided I wanted to invest in something, this was by no means my first thought,” she says.

“It occurred to me that niche businesses do better since competition isn’t as fierce, and a few years ago I did a lot of research counting heads and speaking to people about what they liked and what they didn’t. And I decided this seems to be the business to be in.”

The two leading Toronto blogs, blogTO and Torontoist, have each come up with their own must-read posts exploring Toronto's internal divisions and their import


With Rob Ford's ascent to front-runner status in the 2010 mayoral race, much is once again being made of the oppositional voting preferences of those who reside in old (urban) Toronto and what were once the suburbs that sprouted up around the core of the city. I say "what were once the suburbs" because post-amalgamation it makes little sense to use this terminology to describe areas like Scarborough, North York and Etobicoke.

But, forgetting this terminological inaccuracy, there's compelling evidence -- at the very least from a political perspective -- to suggest that the old city and its former suburbs have never aligned ideologically.

[E]ven though Barbara Hall, [Mel] Lastman's competition in the mayoral race that year, was also against amalgamation, it's not really a surprise that the results of the election were split between north and south. Regardless of their stance against the province's decision to amalgamate, the deed had been done, and each candidate was affiliated with the municipality he/she formerly governed. Hall was the lefty from old Toronto, while Lastman's position on the right struck a chord with voters in other formerly suburban municipalities beyond just North York (e.g. Etobicoke and Scarborough).

None of this is really news. But it does at least partially explain Rob Ford's recent polling success. I can recall a number of occasions over the last few weeks in which I confidently proclaimed that Ford's popularity will be checked once the mayoral race kicks into high gear post-Labour Day. It wasn't a particularly sophisticated argument I was making. At bottom, I merely believed that Ford's views on a host of issues -- be it immigration, same-sex marriage, city spending or reducing the number of city councillors -- don't jive with the values of the average Torontonian.

But, alas, there's a basic fallacy that informs this stance, one that these maps and recent polls show rather well. It's not really possible to speak of average or typical citizens when it comes to Toronto politics (if it ever is). In the wake of amalgamation in particular, the nature of the issues at play in municipal politics tends to galvanize groups of people who share a common geography.

The researchers who compiled the data (graduate students working for MPI, and not Florida himself) were struck by how tightly clustered Toronto's creative jobs are, and by how closely those jobs hew, geographically, to subway lines. They say this indicates that Toronto's subway network doesn't benefit all types of workers equally.

"When you look at our map, and you look at who is best served by something like the subway system, it's the people in the creative occupations, which tend to make more [money]," said Patrick Adler, the report's lead researcher and a graduate student in geography at the University of Toronto. "If you're a creative class worker, you're probably more likely than any other kind of worker to drive to work, but if you choose to take the subway it really works out well for you." Service and working-class employees, meanwhile, are less likely to have easy access to speedy rail transit at their places of work, because their jobs are more evenly distributed across the city.

Addressing inequalities in transit access is a major policy goal for all of this year's mayoral contenders, each of whom advocates either light rail or subway expansion, or some combination of the two. Adler and his team, upon studying their data, have proposed a different solution: bus rapid transit, or BRT—which is when road infrastructure and bus scheduling are altered in any of a number of ways to give buses priority over car traffic. Usually, it entails giving certain bus routes their own separate, dedicated lanes.

"Our recommendation about rapid bus systems was a very pragmatic one. We understood that the planning horizon for even light rail is so long, and there are so many variables," said Adler, alluding to the political travails of Transit City.

BRT is currently scarce in Toronto. There's a dedicated busway between Downsview Station and York University. Another BRT route is under consideration for along Kingston Road and Danforth Avenue between Victoria Park Avenue and Eglinton Avenue East, in Scarborough. York Region, Mississauga, and Brampton are all in the process of implementing BRT systems.

"We were trying to think of something that could be implemented even with the City's current resources," said Adler.

I've a post up at Demography Matters summarizing an interesting comparative study of migration from poorer to richer countries, using the specific examples of the Mexican movement to the United States and the Moroccan movement to the European Union. What do these migrations have in common (a lot, it turns out)? And how can migrant-sending countries capitalize on the migration experience?