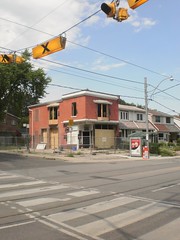 Empty on Gerrard (2)
Originally uploaded by rfmcdpei
This, another empty store on Gerrard Street, was at least being worked on.

A work friend introduced me to the work of Röyksopp with three dozen mp3s, and I love them. The duo's electronic music feels decidedly human and intimate. Their 2009 collaboration with the intruiging Swedish pop star Robyn, "The Girl and the Robot", is fantastic. The link to the original, at once amusing and sad video, is here; a video with a high-quality version (so it says) of the song is below.

The Globe and Mail's Steven Chase reveals the unsurprising news.

A June, 2010, internal study obtained by The Globe and Mail under the access-to-information law offers an inside look at how new census-taking rules could skew data in a range of areas from housing to demographics.

Statistics experts warn its findings demonstrate how minorities and groups such as renters could be measurably underrepresented or miscounted in the coming 2011 census.

The Statscan study, Potential Impact of Voluntary Survey on Selected Variables, was prepared with full knowledge of Ottawa’s census change plans. It attempts to re-create what the 2006 long-form census questionnaire would have yielded had respondents not been compelled to answer it. These simulated results were contrasted with real 2006 census data.

Statscan researchers found the voluntary approach produced less accurate results – a problem that was especially significant in small population groups, according to outside statistics advisers who reviewed the report for The Globe.

For instance, the real 2006 census long-form found that renting households as a percentage of the population in Canada had dropped by 3.08 percentage points from the 2001 census.

But when the Statscan study simulated the results of a voluntary 2006 long-form – which reflect the lower response rates expected in optional surveys – it got a markedly different answer. Calculations instead indicated that rented dwellings in Canada as a share of the population declined by 8.07 percentage points from 2001.

In another example from the report, the real 2006 long-form census found that visible minorities as a share of the population increased by 2.77 percentage points between 2006 and 2001. The simulated voluntary approach would have reported an increase of only 0.74 percentage points.

At 3 Quarks Daily, Daniel Rourke's essay explores an interesting sort of paradox, how the error that frightens people is also necessary for existence.

Science fiction is full of liminal beings. Creatures caught in the phase between animal and human, between alien and Earthly, between the material and the spirit. Flowing directly from the patterns of myth Brundlefly [the fusion of protagonist and fly in Croenberg's 1986 The Fly] is a modern day Minotaur: a manifestation of our deep yearning to coalesce with natural forces we can’t understand. The searing passions of the bull, its towering stature, are fused in the figure of the Minotaur with those of man. The resultant creature is too fearsome for this world, too Earthly to exist in the other, and so is forced to wander through a labyrinth hovering impossibly between the two. Perhaps Brundlefly’s labyrinth is the computer algorithm winding its path through his genetic code. As a liminal being, Brundlefly is capable of understanding both worlds from a sacred position, between realities. His goal is reached, but at a cost too great for an Earthly being to understand. Seth the scientist sacrifices himself and there is no Ariadne’s thread to lead him back.

Hybrids such as the Minotaur or Brundlefly are meeting points for disparate categories of representation. They symbolise the tragic limits of human perception. Unable to grasp the world in and of Itself (nature) we colonise it with ever more fabricated representations and imitations (culture) which only result in distancing us yet further from The Thing Itself. One such category of fabrication, a favourite in science fiction, is ‘code’. Brundlefly is a Thing caught on the threshold between, what in geek-terminology we might call, wetware and software. Cronenberg’s parable [The Fly] plays into the hands of every techno-fearing luddite: a monster born from our desire to reduce nature to science; to simplify lumpy, oozing, unpredictable flesh in the patterns of an efficient genetic code.

We are all the tragic Brundefly because whilst we see beauty and endless creative potential in the natural world around us, we find it impossible to quantify those same categories in the reductive models we have devised to describe them. To describe nature, whether genetic codes unwinding or bees busying around their nest, we gasp at its “creativity”, ascribing its endless variation a human-like attention to detail. But as Richard Dawkins alludes to below, the most creative force in nature is the absolute opposite of perfection: it is in fact error. The world that science has modelled for us is a world riddled with mistakes, failures and run away coding errors. In order to ‘create’ nature must, as Alexander Pope said of the human, err[.]

Window on Eurasia reports on the results from last year's census in Belarus. The broad trends--population aging, an excess of women over men, the assimilation of ethnic minorities at the same time that the Russian language makes headway--aren't much of a surprise, but it's nice to get confirmation.

Minsk has now released the results of the national census Belarus conducted in 2009. The most dramatic figure is that Belarus has suffered a serious decline in its total population, with that statistic falling from 10,045,000 in 1999 to 9,500,000, the kind of decline that has afflicted neighboring Slavic republics as well (unuan.net/?p=20).

But as Belarusian demographers note, this overall decline is hardly the only “negative demographic tendency” the new census has shown. Over the last 10 years, the percentage of adult men and women who are married has declined, the result both of an increasing gender imbalance – 1150 women for every 1,000 men – and a growing number of divorces.

The first of these, largely the result of greater alcoholism among men, is preventing Belarus even more than the Russian Federation or Ukraine from overcoming the gender imbalance that was produced by the greater number of male deaths in World War II, while the second is part of a broader pattern.

In addition, Belarus has seen the share of pensioners increase and the number of children decrease by almost 30 percent, a figure that does not augur well for the future. And the census showed that 75 percent of Belarusians now live in cities, a figure certain to increase because the rural population is declining much more rapidly than the urban one.

The Belarusian census also found that the share of the republic’s population who consider Belarusian to be their native language has declined from “almost 74 percent” in 1999 to only 53 percent now, a bare majority. And only 23 percent say they use that language at home on a regular basis, down from 37 percent a decade ago.

As I understand it, the Russian language has displaced Belarusian in public life at least as thoroughly as (say) English in Ireland; or, perhaps more accurately, it has prevented Belarusian from occupying that place. It's not surprising to see the usage of Belarusian to continue to decline.

I've a post up at Demography Matters taking apart the claim of a Moroccan author that higher birthrates among the Muslims of the Spanish African enclaves of Ceuta and Melilla will lead to their transfer to Spain. Go, read.
Collapse