One fine Sunday I went with Andrew to see the Scarborough Walk of Fame ("Celebrating Community, Recognizing Achievement, Inspiring Tomorrow's Leaders"), both in detail and on grander scales. 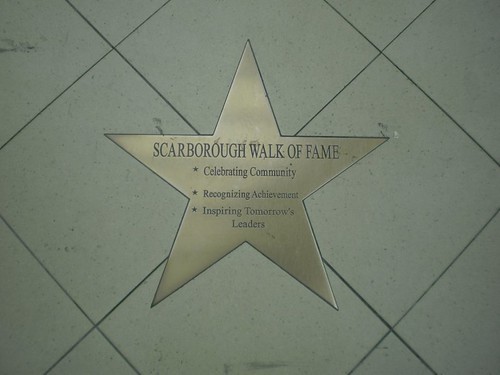 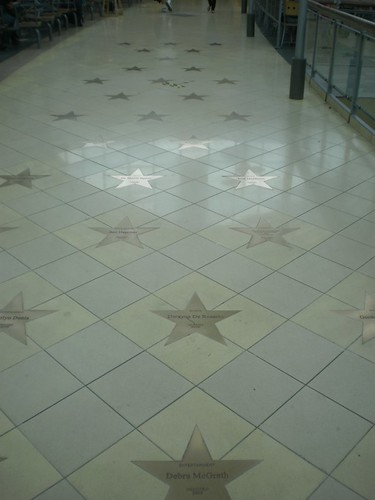 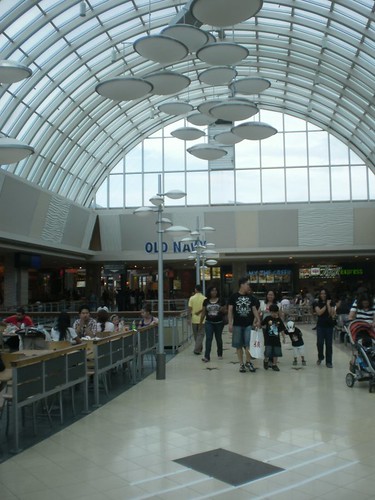 Yes, the Scarborough Walk of Fame is firmly embedded in the middle of the top level of the food fair of the Scarborough Town Centre, the centre of s shoppinh, transport, and administrative complex that also includes the pre-amalgamation Scarborough city hall.

I wonder: what does it mean if the walk of fame that's supposed to commemorate your community's heroes and inspire others to greatness is locked up and inaccessible to the public after 6 o'clock on Sunday?

Cities are communities, and different communities are frequently rivals (as at least one of these communities might want to believe). One city does one thing better than another, or has one attraction that the other lacks and desires; one city has a thriving present while another has a proud past; and so on.

What's Toronto's rivalries? The most durable one probably is the one involving Montréal, that other metropolis of central Canada, a former economic rival and currently admired for its joie de vivre (to use an over-used cliché). Ottawa seems to be a distance northern outpost; Hamilton is an also-run, a proudly industrialized city that has at least deindustrialized rather less catastrophically than Buffalo; Mississauga, that great decentralized suburban municipality with "no there there" is as much as object of pity for a certain class of Torontonians as anything else. Torontonians have been comparing their city to New York forever, and more recently have been pointing to Chicago (the other thriving metropolis on the shore of the Great Lakes, with its own lake frontage and everything), but I suspect that, firstly, comparisons to these two cities are meant at least as much as bludgeons for the comparers' critics as anything else, and secondly, that New Yorkers and Chicagoans don't take notice of these.

Within Toronto, interestingly enough, the patchwork of identities that existed pre-amalgamation has survived. Speaking of the old cities within Metropolitan Toronto, Etibocoke at the western end and Scarborough on the eastern end have been stigmatized as boringly suburban, Scarborough in particular with its nickname of "Scarberia." Recent municipal elections in Toronto, and the ongoing campaign, do suggest a continued north-south polarization of the city, between (very broadly speaking) stereotypica;ly suburban and urban populations.

That's Toronto. What are things like for your cities? What external or internal rivalries exist in your cities?
Collapse