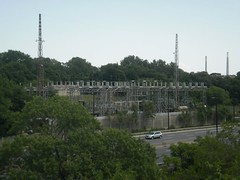 Ontario Hydro-by-the-Don
Originally uploaded by rfmcdpei
This electrical transmission complex, located on the east side of the Don River above the Don Valley Parkway and south of Gerrard, looked so oddly scenic set against the green trees that I had to take this picture.

At the Globe and Mail, Barrie McKenna writes about the surprisingly strong and high barriers to free trade between Canadian provinces. The European Union, in many respects, is more internally integrated than Canada.

All levels of government are guilty, and all of us pay the price. A recent back-of-the-envelope calculation by the Macdonald-Laurier Institute puts the tally of internal trade barriers at 0.5 per cent of GDP, or $8-billion a year. Getting rid of them would put nearly $1,000 into the pockets of a family of four.

The list of these costly barriers is frustratingly long. Alberta insists that only provincially certified welders assemble components used in the oil sands and other projects. Federal law bars people from ordering wine directly from another province. Quebec requires all butter sold in the province to be wrapped in foil. B.C. won’t let Ontario buses on its roads because of differing brake standards. The no-brainer of creating a national securities regulator has become a decades-long saga.

Governments, particularly at the provincial and municipal level, continue to steer big purchases to local suppliers. Ontario and Quebec, for example, are currently doling out generous subsidies to wind and solar power producers, but only if they source most of their goods and services at home.

In some cases, it’s now easier to do business internationally than inside the country. Carole Presseault, vice-president of government and regulatory affairs for the Certified General Accountants Association of Canada, argues that U.S. accountants face fewer restrictions working in Ontario than accountants from elsewhere in Canada.

That’s because Ontario, like virtually every other province, can indefinitely keep out professionals certified in another province as long is it lists the restrictions and makes a case why they’re needed. Ontario deems that Certified Public Accountants and Certified Management Accountants from the rest of Canada aren’t fit to work in the province.

The good news is that the current system may be buckling under the weight of its own inefficiency. International trade deals, such as the proposed Canada-EU trade treaty, are forcing negotiators to confront many remaining barriers.

The New York Times' William J. Broad examines how, with a big push from the national government and technology imported from around the world, China's developing advanced submersible technology, with likely implications for the exploitation of undersea resources. Chinese nationalism may interfere with the orderly implementation of this technology, though.

The global seabed is littered with what experts say is trillions of dollars’ worth of mineral nodules as well as many objects of intelligence value: undersea cables carrying diplomatic communications, lost nuclear arms, sunken submarines and hundreds of warheads left over from missile tests.

While a single small craft cannot reel in all these treasures, it does put China in an excellent position to go after them.

“They’re in it for a penny and a pound,” said Don Walsh, a pioneer of deep-ocean diving who recently visited the submersible and its makers in China. “It’s a very deliberate program.”

The small craft that made the trip — named Jiaolong, after a mythical sea dragon — was unveiled publicly late last month after eight years of secretive development. It is designed to go deeper than any other in the world, giving China access to 99.8 percent of the ocean floor.

Technically, it is a submersible. These craft differ from submarines in their small size, their need for a mother ship on the surface, and their ability to dive extraordinarily far despite the darkness and the crushing pressures. The world has only a few.

Jiaolong is meant to go as deep as 7,000 meters, or 4.35 miles, edging out the current global leader. Japan’s Shinkai 6500 can go as deep as 6,500 meters, outperforming craft “all over the world,” according to its makers. Russia, France and the United States lag further behind in the game of going deep.

Thanks to Scott from Facebook for pointing me towards this remarkable story. The white dwarf BPM 37093, in the general direction of Alpha Centauri, I suppose (just keep going a total of fifty light years) has just provided proof of astronomers' theories of stellar evolution.

The cosmic diamond is a chunk of crystallised carbon, 4,000 km across, some 50 light-years from the Earth in the constellation Centaurus.

It's the compressed heart of an old star that was once bright like our Sun but has since faded and shrunk.

Astronomers have decided to call the star "Lucy" after the Beatles song, Lucy in the Sky with Diamonds.

The huge cosmic diamond - technically known as BPM 37093 - is actually a crystallised white dwarf. A white dwarf is the hot core of a star, left over after the star uses up its nuclear fuel and dies. It is made mostly of carbon.

For more than four decades, astronomers have thought that the interiors of white dwarfs crystallised, but obtaining direct evidence became possible only recently.

The white dwarf is not only radiant but also rings like a gigantic gong, undergoing constant pulsations.

"We figured out that the carbon interior of this white dwarf has solidified to form the galaxy's largest diamond," says Metcalfe.

Astronomers expect our Sun will become a white dwarf when it dies 5 billion years from now. Some two billion years after that, the Sun's ember core will crystallise as well, leaving a giant diamond in the centre of the solar system.

It's worth noting that most of the nearby white dwarfs are too young to have crystallized, particularly Sirius B and Procyon B. 40 Eridani B may be old enough--the whole system is estimated to be 5.6 billion years old, only a bit older than the sun--but I'm unaware of any estimates as to the timing of B's evolution, while the solitary white dwarf Van Maanen's Star certainly has crystallized if the two billion year timetable applies to it.

Inter Press Service's Thalif Deen writes about how Brazil is doing its best to produce a 2010 census that's as accurate as possible, using the latest technologies and organizational methods. It's a pity that they're heading down the route of Canada's feared census totalitarianism, but I suppose that Brazil's thoroughness is to be respected.

Brazil, the world's fifth largest country and the biggest in South America, has stolen a march over most others by conducting its first-ever paperless, all-digital fully-computerised nationwide census.

The Brazilians say their 2010 Census, which began Aug. 1, will be "the most accurate, comprehensive and technologically sophisticated undertaking - since the country's first count in 1872 - and arguably in world history."

At least four other countries, Oman, Cape Verde, Uruguay and Colombia, have gone all-digital, according to the U.N. Population Fund (UNFPA).

But in magnitude and geographical reach, the Brazilian census is expected to be demographically formidable - judging by the country's current population of 194.3 million spread across a territory of some 8.5 million kms.

The statistics are staggering: 58 million households and 5,565 municipalities to be surveyed; 240,000 persons earmarked for census-taking and logistical support; 225,000 hand-held personal digital assistants (PDAs) and notebooks equipped with Global Positioning System (GPS) receivers; and about 8,400 laptop computers.

The census takers will transmit the data via the PDA device to over 7,000 regional data collection centres across the country.

Continuing its passion for the digital, Brazil also provides the option of filling out the census questionnaire via the internet.

But this is valid only after a visit by the census-taker who will personally provide a sealed envelope with a code giving access to the questionnaire on a secure website. The total cost of the four-month-long census is estimated at over 900 million dollars and the preliminary figures are expected to be released Nov. 27. The initial preparations began in 2007 with pilot test runs in 2009. The final results will be released in 2011.