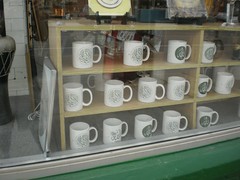 Mugs in the Window
Originally uploaded by rfmcdpei
Islamic Books and Souvenirs, at 1395 Gerrard Street in the middle of Little India, sells a variety of publications (mainly in English and Urdu) and souvenirs. I've been inside on a couple of occasions, and I can say that this bookstore contains some--let's say--conservative publications, one discussing when and how it's permissible for a husband to corporally punish his wife. Something about this array of coffee mugs prominently displayed in the window makes me feel better about it all.

Peter Singer's op-ed is, as one would expect given the philosopher's pedigree, provocative. It certainly makes me feel even more guilty about the goldfish.

In most of the world, it is accepted that if animals are to be killed for food, they should be killed without suffering. Regulations for slaughter generally require that animals be rendered instantly unconscious before they are killed, or that death should be brought about instantaneously, or, in the case of ritual slaughter, as close to instantaneously as the religious doctrine allows.

Not for fish. There is no humane slaughter requirement for wild fish caught and killed at sea, nor, in most places, for farmed fish.

Let’s assume that all this fishing is sustainable, though, of course, it is not. It would then be reassuring to believe that killing on such a vast scale does not matter because fish do not feel pain. But the nervous systems of fish are sufficiently similar to those of birds and mammals to suggest that they do. When fish experience something that would cause other animals physical pain, they behave in ways suggestive of pain, and the change in behaviour may last several hours. (It is a myth that fish have short memories.) Fish learn to avoid unpleasant experiences, such as electric shocks. And painkillers reduce the symptoms of pain they would otherwise show.

Victoria Braithwaite, a professor of fisheries and biology at Pennsylvania State University, has probably spent more time investigating this issue than any other scientist. Her recent book Do Fish Feel Pain? shows that fish are not only capable of feeling pain, but also are a lot smarter than most people believe. Last year, a scientific panel for the European Union concluded that the preponderance of the evidence indicates that fish do feel pain.

Why are fish the forgotten victims on our plate? Is it because they are cold-blooded and covered in scales? Is it because they cannot give voice to their pain? Whatever the explanation, the evidence is now accumulating that commercial fishing inflicts an unimaginable amount of pain and suffering. We need to learn how to capture and kill wild fish humanely – or, if that is not possible, to find less cruel and more sustainable alternatives to eating them.

I've written in the past about the interesting phenomenon of Québec's development of its own foreign policy, oriented towards supporting immigration, trade, and connections with other Francophone polities not least of which is France. Now, Frank Ching in the Globe and Mail provides an interesting comparison by looking at the case of Hong Kong, almost entirely self-governing and with a certain profile on the international stage but still, dependent on China.

According to the Basic Law, Hong Kong’s mini-constitution enacted by the Chinese Parliament, Hong Kong enjoys a high degree of autonomy while the central government is responsible for defence and foreign affairs.

However, even where foreign affairs are concerned, Hong Kong is allowed to develop economic, trade, financial and monetary, shipping, communications, tourism, cultural and sports relations with other countries.

[. . . W]when 15 Hong Kong residents were held hostage in Manila on Aug. 23 by fired policeman Rolando Mendoza, chief executive Donald Tsang was not able even to get through on the telephone to Philippine President Benigno Aquino III. Mr. Tsang had wanted to urge Mr. Aquino to give top priority to the safety of the hostages.

At a Sept. 9 press conference, Mr. Aquino likened the chief executive to a provincial governor and said, “If a Philippine governor suddenly demands to speak with President Obama or Hu Jintao, that would probably not be allowed.”

China did come through for Hong Kong, but this incident just highlights the city-state's dependence.

[E]ven if there is no constitutional obstacle to Hong Kong’s dealing directly with foreign governments, there are practical problems.

The Chinese Foreign Ministry has several hundred diplomatic missions around the world, while Hong Kong has economic and trade offices in only about 10 countries. Thus, Hong Kong has little choice but to work through the ministry, which has the resources to provide aid in case of emergencies. And most Hong Kong residents, after all, are Chinese nationals whom the Chinese government has an obligation to protect.

I've got a post up at Demography Matters examining a new metric for measuring the ratio of adult non-workers to the total population of working age that could be more useful than the traditional old-age dependency ratio. Go, read.
Collapse