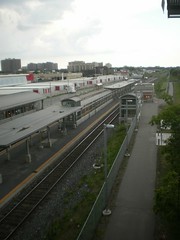 This Bloomberg Businessweek article explores the interesting reunification of a Yugoslavian community of sorts, an association of independent states with shared historical, economic, even cultural links. I'm not sure that the authors distinguish sufficiently between the various components of the "Yugosphere"--Slovenia's not only in the European Union but in the Eurozone, while Croatia is slated to join soon, and the remainder of the former Yugoslavia including Serbia doesn't have a date--but still, there's something there; the wage differentials alone should ensure some sort of regional integration.

“I remember a time when politicians criticized companies that did business with the rest of Yugoslavia,” said [Franjo Bobinac, the chief executive officer of Slovenia’s Gorenje Group d.d., the largest appliance maker in the Balkans,] in a Sept. 13 interview before today’s presentation. Executives want to promote “top-quality products from the time of a once- unified state,” he said.

The combined gross domestic product of the six former Yugoslav republics of Slovenia, Croatia and Serbia, Macedonia, Montenegro and Bosnia Herzegovina and the breakaway province of Kosovo totals $192 billion, about the same as the Czech Republic and Portugal, according to the International Monetary Fund.

People everywhere may not be ready for Yugosphere, but they are living it,” said Tim Judah, the Economist magazine writer who coined the term. “In the morning they drink Croatian milk, then they watch a program on Bosnian TV, and eat a snack made by a Serbian company that is owned by a Slovenian company, which is about to be bought by a Croatian company.”

Croatia and Slovenia have agreed on ways to settle a border row and pledged on July 31 to resolve a quarrel about Ljubljana- based Nova Ljubljanska Banka d.d., which was barred from operating in Croatia because its Yugoslav predecessor owes Croatian savers $208 million plus interest.

This news item surprises me. Perhaps it shouldn't have: despite his Liberal history, Smitherman does have recognition at the provincial level as a politician of some heft, at least, and is a known quantity unlike Ford.

“We’re conservatives. He’s a Liberal,” begins an open letter titled “Why We Support George” that includes the names of almost 40 provincial and federal Conservatives, including former citizenship, culture and recreation minister Isabel Basset.

She circulated the email at the request of his campaign, said Stefan Baranski, a spokesman for the candidate and former Conservative communications aide who is himself a signatory. Others include Jamie Watt, a strategist and senior Smitherman campaign adviser.

“He’s tough. But he’s fair,” says the letter also signed by former ministers Charles Harnick (attorney-general) and Dan Newman (environment). He “is the only candidate who has said it’s the mayor’s job to create the climate where businesses will thrive and jobs will be created right here,” the signatories say.

Smitherman, an early frontrunner who is now trailing the penny-pinching Ford, recently promised conservative measures including a “war on waste” and a temporary freeze on property taxes.

“I believe in inclusiveness and I think (Smitherman) represents that in a big way,” Bassett said in a phone interview. “Just because he’s a Liberal doesn’t mean he can’t work with Conservatives and NDP — (city politics) is like a big tent.”

Bassett said she waited until former Ontario Conservative leader John Tory made clear his intention not to run before declaring support for Smitherman.

While popular with the grassroots, Ford has not attracted big-name Conservatives. At his campaign launch in March, Conservative MPP Christine Elliott said she was backing him, while her husband, federal Finance Minister Jim Flaherty, said “it wouldn’t hurt to have a fiscal conservative as the mayor of Toronto.”

The Discover magazine blog Not Rocket Science has just reported on a new study examining the famous tool use of the New Caledonian crow: why did the species adopt this complex trait?

In New Caledonia, an island off the eastern coast of Australia, a crow is hunting for beetle grubs. The larvae are hidden within a decaying tree trunk, which might seem like an impregnable fortress. But the New Caledonian crow is smarter than the average bird. It uses a stick to probe the tunnels where the grubs are sheltered. The grubs bite at intruders with powerful jaws but here, that defensive reflex seals their fate; when they latch onto the stick, the crow pulls them out.

The New Caledonian crow is one of the most accomplished tool users of all animals. They produce at least four different types from sticks and grass stems. Their tools have complicated shapes and are manufactured through a process that involves several steps. They can pick the best tools for the job, adjust their size and shape to suit their needs, combine them in sequence to complete a task, and create “meta-tools” by using one tool to get at another. They can make tools out of unfamiliar materials, like coat hangers.

Rutz found that the grubs provide the crows with about as much protein as all the other sources, but they contribute almost half of the fat in the birds’ diet. On average, the crows eat just under two grubs a day, and Rutz calculated that they would only need 3 to meet their entire energy needs.

This shows that an enterprising crow gets tremendous benefits from investing the time and effort it takes to use tools properly. Indeed, young crows can spend years fiddling with their tools to no avail. It’s an unrewarding period, but it eventually pays off.

Interestingly, humans may have played a role in the tool use by creating an ecological niche where tool use would be useful. If so, clearly the crow's smart.

The presence of such an untapped source of energy may have spurred the evolution of the New Caledonian crow’s tool-making prowess. But Rutz thinks that early humans may have inadvertently nudged this process along. On New Caledonia, beetle grubs burrow into the logs of decaying candlenut trees, but these trees were only introduced to the island by prehistoric humans. The trees also provide nuts – the second most important source of fats and proteins for the crow. Rutz suggests that this sudden influx of nutrients might have been a key event in the evolution of one of the world’s smartest birds. 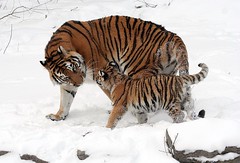 Panthera tigris altaica and cub, at Buffalo Zoo
Originally taken by Dave Pape
The image of a Siberian tiger and one of her cubs at left, taken a couple of years ago by Wikimedia Commons contributor Dave Pape, was taken in the Buffalo Zoo, in New York State. For the various tiger populations of Asia, zoos and other such parks are almost safer for them than their natural habitat, where they suffer directly from hunting and indirectly from habitat destruction. Over at Wired Science, Jess McNally writes that key to the survival of Asian tigers is the maintenance of safe home territories, connected somehow to allow for sufficiently large and genetically diverse tiger populations.

“A lot of effort has been focused on distributing efforts across a broad range, but we need to make sure that these source sites are absolutely protected from poaching, rather than spreading resources too thin,” said Wildlife Conservation Society Asia director Joe Walston, lead author of the study in PLoS Biology September 14.

The researchers identified 42 key tiger habitats through interviews with about 300 people working on tiger conservation on the ground, as well as by analyzing the published material on tiger populations, Walston said.

“If we don’t do what’s in this paper than we have nothing. But we have to do much more than that,” said World Wildlife Fund scientist Eric Dinerstein, who has done work on tigers but was not involved in this study.

“There is no reserve today that is big enough to maintain a genetically viable population of tigers,” he said. “We either need whopping big preserves, which is nearly impossible, or we need to manage tigers as a metapopulation — one big population that is linked by dispersal and habitat corridors.”

Maintaining continuous habitat corridors of forest is critical for keeping tiger populations interacting, since tigers rarely cross even a one or two mile forest gap, Dinerstein said. He added that the World Bank estimates 500 billion dollars per year will be spent building new infrastructure and roads in the tiger range over the next ten years. If governments wait to protect connecting forest corridors, they’ll soon be gone.

And so the downwards spiral of Torontonian disgust with TTC workers descends still further.

It's too bad that TTC station managers have yet to come to all stations. Perhaps if they had, I wouldn't need to be throwing another fare collector under the proverbial bus with this photo a reader sent us of an employee enjoying a little diversion from his responsibilities at Eglinton Station. It's not nap time in this one, but I'm also quite sure that Party Poker isn't on the list of things tasked to those in the collection booth.

I understand that it sucks to work in a glass box in which anyone and everyone can photograph you slacking off. But, given the efforts of the TTC Customer Service Advisory Panel, you'd think staff would be a tad more vigilant of late. But, hey, those damn iPhone cameras are fast, and before you know it, you're on the web for the whole world to see.

Sure it may not be as negligent as sleeping on the job, but it'd be hard to make an argument that this is totally acceptable behaviour. As boring as it must get in there, I get the sense that people would have a whole lot less vitriol if they found employees reading the newspaper (which, of course, does happen often enough). I don't know, it just seems more temporary. And if my friends are any indication, online poker can become completely engrossing.