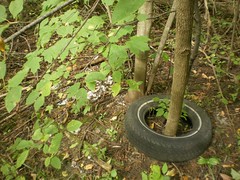 You know a tire has been lying on the ground for a while when ...
Originally uploaded by rfmcdpei

Interesting, this. The rise of these second-tier metropoli says something as to the extent to which China's economic boom is dispersed. The author spends most time examining Hangzhou, a small city in Zhejiang that's home to only 6.5 million people.

In China, the boom that has spawned the well-known mega-cities of Shanghai, Beijing, Guangzhou and Shenzhen is on the move. As the world’s second-largest economy enters its next phase of growth, the nation’s so-called second-tier cities are expected to do the bulk of the heavy lifting.

Dubbed the “Long Tail” of the Chinese dragon, these mushrooming metropolises pack astounding heft. While a new skyscraper seems to bloom in Shanghai every other month, scores of other towers are popping up just as fast in places most Westerners never consider. Including Hong Kong and Taiwan, there are already 60 Chinese cities with populations greater than one million. By 2025, according to consulting firm McKinsey & Co., there will be more than 220 cities with more than a million people each.

In North America, investors worry about the possibility that Chinese growth might slow, bringing with it lower demand for commodities and other goods, but boom towns like Shijiazhuang, Baotou and Zibo provide evidence that a vast reservoir of opportunity remains to be tapped. These second- and third-tier cities will drive demand for raw materials from commodity-rich countries like Canada as China’s expanding municipalities erect new buildings and build more bridges and railways.

Global retailers are already rushing to capitalize on the new affluence on display in China’s emerging urban centres. It was, after all, the consumption habits of residents in scores of second- and third-tier cities with names like Kunming and Chongqing that pushed China to become the world’s largest auto market this year.

With growing prosperity, though, comes anxieties about the corrosive effect of disparities in wealth. The runaway real estate markets that have elicited so much hand-wringing from Chinese government officials are not confined to Shanghai and Beijing. Potential real estate price bubbles are also forming in much smaller, lesser-known locales.

I had thought it practically established that Mars' moon Phobos--its companion Deimos too--was an asteroid captured by Mars' gravity. I had no idea that there was a possibility the moons might have been formed of debris thrown into Mars orbit by a massive impact, in a way similar to how our moon was formed save of smaller scale, but such may be the case.

Recent observations as thermal infrared wavelengths using the Planetary Fourier Spectrometer (PFS) instrument on Mars Express show a poor match between the rocks on Phobos and any class of chondritic meteorite known from Earth.

These would seem to support the "re-accretion" models for the formation of Phobos, in which rocks from the surface of the Red Planet are blasted into Martian orbit to later clump and form Phobos.

"We detected for the first time a type of mineral called phyllosilicates on the surface of Phobos, particularly in the areas northeast of Stickney, its largest impact crater," said co-author Dr Marco Giuranna, from the Italian National Institute for Astrophysics in Rome.

These phyllosilicate rocks are thought to form in the presence of water, and have been found previously on Mars.

"This is very intriguing as it implies the interaction of silicate materials with liquid water on the parent body prior to incorporation into Phobos," said Dr Giuranna.

[. . . S]aid Pascal Rosenblatt of the Royal Observatory of Belgium, "the asteroid capture scenarios also have difficulties in explaining the current near-circular and near-equatorial orbit of both Martian moons (Phobos and Deimos)".

The researchers also used Mars Express to obtain the most precise measurement yet of Phobos' density.

"This number is significantly lower than the density of meteoritic material associated with asteroids. It implies a sponge-like structure with voids making up 25%-45% in Phobos's interior," said Dr Rosenblatt.

A highly porous asteroid would have probably not survived if captured by Mars. Alternatively, such a highly porous structure on Phobos could have resulted from the re-accretion of rocky blocks in Mars' orbit.

Sky and Telescope goes into much greater technical detail.

As you've no doubt gathered so far, this year's Toronto mayoral election is positively pregnant with possibility. One of the interesting things is that this year's slate of candidates was full of Italian-Canadians: TTC chair Adam Giambrone, Deputy Mayor Joe Pantalone, and Liberal Party fundraiser Rocco Rossi. Giambrone withdrew in February following a sex scandal, but Pantalone and Rossi have continued, Pantalone (at 17% or so) rating ahead of Rossi (10%).

“It sounded like an East Side Mario’s ad, quite honestly,” said Valentino Assenza, whose parents immigrated from Sicily. “I think the Italian-Canadian community was misrepresented . . . I was undecided, but him putting that ad out definitely confirmed that I’m not going to be giving my vote to him.”

The new campaign includes print ads featuring the words “wise guy,” “goodfella” and “bocce balls,” as well as TV and radio spots. The ads were launched as a new poll shows Rossi’s support stagnating at 9.7 per cent, a distant fourth place.

“There have been a lot of Hail Marys tossed into the air by the various candidates hoping to get more attention, to get a breakthrough, to somehow puncture the lead that Rob Ford has,” said Myer Siemiatycki, a politics professor at Ryerson University. “It does smack of desperation, it does smack of attention-seeking overdrive, and I don’t think it’ll be successful.”

Rossi, whose parents immigrated to Canada from Italy in the 1950s, said he used the stereotypes in his campaign to flip them around and give them new meaning. “Wise guy” is about being wise, Rossi said. “Bocce balls” is about being courageous and “goodfella” is about doing charity work.

Commenters at Torontoist couldn't believe that these were real ads. blogTO has apparently started a contest aimed at replicating more like ads.

I think Rossi just self-destructed. You?

Richard Solash' Radio Free Europe report describes the vissicitudes of the Istro-Romanian language, one of the Romance dialects connecting the main body of Romance languages in western and southern Europe with the isolated Romance language of Romanian. Not surprisingly, as a small minority, the speakers of Istro-Romanian--the Vlashki--are dwindling in their homeland in Istria, the peninsula that marks the westernmost point of Croatia.

Unlike Croatian, which is Slavic, Vlashki is Romance -- a descendant of the language spoken by the Vlachs, nomadic shepherds who migrated from the area around present-day Romania.

The Vlachs settled in Istria in the 16th century, and over the years their language borrowed heavily from Croatian but always remained distinct.

Known to linguists as "Istro-Romanian," it is both unintelligible and unknown to the vast majority of Croatia's population.

And today, with a mere 150 native speakers remaining in the traditional home villages of Vlashki, and a few hundred more in surrounding towns, the language is well on its way to extinction.

Its demise began after World War II, when a major wave of emigration diluted the community. The building of a tunnel in 1981 that connected villages to urban centers further removed the language's protective isolation.

The wave of emigration, it should be noted, occurred after the Second World War when all the Romance-speakers of Istria--Italian-speaking, Venetian-speaking, and Istro-Romanian-speaking alike--fled Communist Yugoslavia, which had taken the peninsula over from Italy. In all, something like a quarter-million people left the peninsula starting towards the end of the Second World War, fleeing hostile Slavs (Slovene and Croat alike) who resented the Italianization imposed on them under fascism, Communism, and poverty. The entire western coastline was once populated by Romance-speakers, but no more.

Despite this catastrophic dispersion of the Istro-Romanian language communist, a New York City-based linguist wants to try to reverse the tendency towards the adoption of Croatian, and does in fact seem to have made some achievements.

Croatia native Zvjezdana Vrzic grew up in a household with Vlashki roots. Her grandmother was a native Vlashki speaker from Zankovci, a hamlet near one of the six northeast Istrian towns that form the language's epicenter.

After becoming an adjunct professor at New York University, Vrzic again found herself in a Vlashki setting of sorts: New York City, and specifically, the borough of Queens, which is home to the largest community of Vlashki speakers outside Croatia.

The setting, along with her family history and profession, was enough motivation for Vrzic to initiate an ambitious project that's now in its fifth year.

"I want to create a digital archive -- a regional digital archive -- where all the materials available on the language, including those that I'm collecting myself, will be deposited," Vrzic says. "[I want to create] an archive that will become available to the community members. And I'm kind of bringing a different angle to it by making it very technologically-inspired."

Vrzic's website launched in June and is now the focal point for her project's many parts. It features audio and videos of Vlashki speakers, collected by Vrzic as well as Brkaric, who assists her, and other helpers.

There are also language lessons, a Vlashki-Croatian dictionary, digitized versions of the few printed Vlashki-language stories, maps, historical information, and photographs. In total, it's the start of an ethno-linguistic corpus.

Next on Vrzic's agenda is to complete linguistic analyses of her language samples. She also intends to add to the online dictionary, which is based on work done in the 1960s by another linguist, create a Croatian-to-Vlashki version, and eventually translate it into English.

But. These achievements are all well and good, but I'm skeptical about their long-term value. Much larger minorities, with populations numbering in the tens of thousands like the Sorbs of Germany, the Romansh-speakers of Switzerland, even the Ainu of Japan, are facing serious threat of assimilation. Can such a small population, isolated from other Romance language-speakers but intermixed with a much larger language community, survive much longer? I hae ma doots.
Collapse