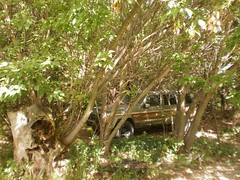 Hidden in the brush
Originally uploaded by rfmcdpei
What do you see?

Canny idea, this. Certainly economically underdeveloped countries could use as much domestically-raised capital as they could raise. If the theory works, of course.

Senegal, Pakistan and Afghanistan, among the world’s 50 poorest nations, are turning to Islamic banking to spur economic growth by encouraging people to take out loans and open savings accounts.

Outstanding domestic bank lending accounted for 3.5 percent of Afghanistan’s gross domestic product in 2008, 25 percent in Senegal, 27 percent in Nigeria and 46 percent in Pakistan, according to data compiled by the World Bank. The rates compare with 224 percent in the U.S. and 115 percent in Malaysia, a global hub for finance that conforms with Shariah principles.

Developing Islamic nations have shunned banking in part because of the religion’s ban on interest, limiting access to funds for project financing and stunting business growth, according to the International Monetary Fund. Governments should improve regulations, products and institutions that comply with Shariah law to accelerate the industry’s development, Patrick Imam and Kangni Kpodar, economists at the IMF, said in a telephone interview from Washington on Sept. 14.

“Islamic banks provide access to finance to a segment of the population that is underbanked,” said Imam. Once “they start putting money in these banks you start a process of financial intermediation, where savings are channeled from individuals via Islamic banks to investments,” he said.

The concept of risk-sharing in Shariah banking that prohibits interest payments would be more useful in Muslim countries because their economies are less diversified, the IMF economists said.

“In the Islamic banking system, both the bank and entrepreneur share the reward and failure, and in many developing countries such risk sharing might allow entrepreneurs to undertake projects that they couldn’t otherwise contemplate,” said Kpodar at the IMF.

Some say the world will end in fire,
Some say in ice.
From what I’ve tasted of desire
I hold with those who favor fire.
But if it had to perish twice,
I think I know enough of hate
To say that for destruction ice
Is also great,
And would suffice.

The poem can be taken to refer relatively directly to the likely fates of the Earth--will it be engulfed by a Sol turned red giants, or will it freeze?--and more abstracts connects to the human heart's ability to wreck the world. I was surprised to find out, via Not Rocket Science, that ice might in fact have fostered the emergence of life on Earth.

Some of the most popular theories suggest that life began in a hellish setting, in rocky undersea vents that churn out superheated water from deep within the earth. But a new paper suggests an alternative backdrop, and one that seems like the polar opposite (pun intended) of the hot vents –ice.

RNA can store information, speed up chemical reactions, and make copies of itself without any outside help. It evolves too – stick it in a test tube with the right raw materials and a source of energy and it eventually gets better and better at copying itself. This ability was first demonstrated in 1972 by Sol Spiegelman and the brutally efficient RNA strand that resulted was melodramatically known as Spiegelman’s monster.

But RNA’s unique physical properties aren’t enough. The molecule is also very fragile and it would rapidly degrade under all but the gentlest environmental conditions. It also needs to be concentrated in some way. A molecule that makes copies of itself needs to be kept in the same place as its constituent chemicals; if the parts are allowed to disperse, the whole will never come together. So RNA may have the right qualities, but it needs a stable and confined space to make the RNA world a reality. Attwater thinks that ice provides just such a space.

At first glance, this seems like a bizarre idea. For a start, cold temperatures can slow many chemical reactions to a crawl. Proteins that piece together RNA molecules stop working when they’re frozen. But remember, RNA in the form of ribozymes can speed up its own creation without any proteins. And Attwater found that one such ribozyme called R18 is still active at subzero temperatures. In fact, ice actually stabilised the ribozyme, preventing it from breaking down. On ice, the ribozyme was slower than at room temperature but it also carried on working for longer. As a result, it was actually more productive, creating longer lengths of RNA with no less accuracy.

That’s one problem down, but there’s also the fact that ice is solid. You might think that this would prevent molecules from meeting each other with ease, but ice isn’t completely solid. At a microscopic level, weaving their way between the crystals, there’s a complicated network of channels and spaces that haven’t frozen completely.

The water in these spaces is salty; as the surrounding molecules froze, any dissolved impurities were pushed away and became concentrated in the remaining liquid. Attwater found that this process boosts the concentration of ions, nucleotides and other chemicals in the liquid compartments by over 200 times. That accelerates the work of the ribozymes, and more than compensates for the slowing effects of the cold.

The blog concludes that this theory works only if the early Earth was icy. Some recent evidence suggests so, and certainly the dimness of early Sol relative to today--Sol was only 70% as bright as it is now--might facilitate this chill.

This model also has serious implications for life on other worlds. It's reasonably well-known that many moons--Jupiter's Europa, Saturn's Enceladus--almost certainly harbour oceans of liquid water under their icy surfaces, and that this water could theoretically support life. Might the fact that these worlds have so much ice say interesting things about the prospect of Europan and Enceladean biospheres?

Last week I mentioned the Conservative government's efforts to close down Canada's long gun registry by--among other things--bashing Toronto and MPs who changed their mind on the issue. They lost.

By a margin of 153-151, MPs voted to keep the registry, a controversial program decried by opponents as a costly, ineffective intrusion on law-abiding gun owners while applauded by advocates as an essential tool for police officers that saves lives.

The vote caps weeks of backroom drama — and high-level arm-twisting — as opposition MPs who opposed the registry were brought onside by party leaders to ensure its survival.

Just weeks ago, it appeared the registry was dead as Conservative MP Candice Hoeppner had the backing of Liberal and NDP MPs for her private member’s bill that would end it.

But six NDP MPs who backed Hoeppner’s bill changed their minds, along with several Liberal MPs. Another six NDP MPs backed the Conservative push to scrap the registry Wednesday, producing a nail-biter of a vote.

Me, I think it's a good thing. Keeping the registry is clearly a good thing, by my lights and by others'.

The 15-year-old registry, brought in by the former Liberal government in 1995 in response to the killing of 14 women at Montreal’s L’Ecole Polytechnique in 1989, has long been opposed by the Harper government.

A handgun registry centralized under the RCMP for the first time in the 1950s and was expanded to include the requirement to register shotguns and rifles by the former Liberal government.

The long-gun registry has been a lightening rod for controversy since its inception. In rural Canada, it has been particularly unpopular among hunters and farmers, but it has support in cities, particularly from police and victims groups.

Critics of the registry brand it a wasteful attack on law-abiding firearms owners, like hunters and farmers.

Supporters of the registry say it has contributed to public safety by cutting down the number of spousal killings and suicides and it is an important tool for police when they respond to calls. The RCMP reported recently that compiling a registry of the 6.5 million rifles and shotguns has been a cost-effective and useful crime-fighting tool.

This also marks one of the first times that Canada's opposition parties--the Liberals, the New Democratic Party, and the Bloc Québécois--have united to defeat a major initiative by the Conservative government. Hopefully, there will be more to come.

In the end, as John Geddes' noted at his MacLean's blog, the Conservative initiative was all show for its base. How do we know this? Because its approach is fundamentally inconsistent.

The appreciation of the Swiss franc relative to the Euro has made Switzerland less attractive as a destination for tourists. Seeing as how Switzerland is literally surrounded by the Eurozone, this isn't a good thing.

The country has become 15 percent more expensive for tourists from the euro region because of the franc’s rally, said Juerg Schmid, the Zurich-based head of Switzerland Tourism marketing group. A global survey of 73 urban centers by UBS AG found that Zurich is the second-least affordable city after Oslo.

Switzerland lost about 2 percent of hotel visitors from Germany, Europe’s biggest economy, during the first half of the summer season, according to the BAK Basel Economics research institute. As the country’s central bank stops trying to suppress gains, the currency may rise further with investors concerned about a global economic slowdown seeking the safety of the franc.

The Swiss currency strengthened to a record 1.2766 versus the euro on Sept. 8. It advanced 4.7 percent against the dollar this year, reaching parity on Sept. 14 for the first time in almost 10 months.

In Zurich, where artists from Lauren Bacall to Andy Warhol dined at the historic Kronenhalle restaurant, tourism accounts for 3.2 percent of gross domestic product. That compares with 5 percent in Vienna and as much as 6 percent in London.

A McDonald’s Big Mac costs $6.19 in Switzerland, compared with $3.73 in the U.S. and $4.33 in the euro area, according to data compiled by The Economist. The figures are based on so- called purchasing power parity, which states that the dollar should buy the same amount in all countries.

“I spent 13 francs on a McDonald’s meal and I didn’t even get a refill,” said Julio Cesar Ponce, a 30-year-old computer- science researcher from Aguascalientes, Mexico, who was standing on a Zurich bridge overlooking the Limmat river. In the U.S., that meal would have cost about half the money, he said.

An Alberta trying to expand American interest in its oil sands may be finding out what Québec learned in the early 1990s when it tried to expand Hydro-Québec's electricity exports to the United States using new dams in its north, that opposition from First Nations may complicate matters enormously.

In the ongoing battle to sway American opinion about Canada’s vast oil sands, Alberta Premier Ed Stelmach scored a public relations coup last week when he hosted three U.S. senators on a tour of some of the biggest projects around the northern Alberta community of Fort McMurray.

South Carolina Senator Lindsay Graham returned to Washington with a glowing report, declaring Canadian oil “reliable, safe and secure” and vowing to do “everything I can” to ensure there are no obstacles to its future production and export to the U.S. market.

But First Nations leaders who oppose expansion of the oil sands say the senators got a distorted view — one that excluded their concerns about potential health and environmental damage that more development will inflict on their communities.

“I think it’s a very sad commentary that [we] have to leave our own homelands to impress upon other countries the significance of our challenges and the treatment we are receiving,” George Poitras, a former chief of the Mikisew Cree First Nation at Fort Chipewyan, Alta., said Wednesday in Washington.

Poitras was part of a First Nations delegation that concluded a three-day visit to the U.S. capital aimed at persuading the Obama administration to block a proposal by Calgary-based TransCanada Corp. to build a new pipeline that would carry oil from northern Alberta to the Gulf Coast.