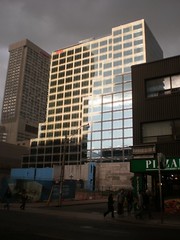 Xerox Centre, 33 Bloor Street East
Originally uploaded by rfmcdpei
33 Bloor Street East is home to the Xerox Centre (Emporis, Skyscraper Page), a skyscraper 17 stories high (with one basement level) that has had its entire western side exposed for all to see ever since the ongoing oft-promised 1 Bloor East condo development tore down the Roy's Square cluster of shops.

I took this photo of the Xerox Centre's panels gleaming in the sunset trying to take something in a less documentary mode than most of my other photographs, something dream-like. I hope I succeeded. (Suggestions?)

While on his way to his new home in Vancouver, Andrew Barton stopped off in Kenosha, Wisconsin, there exploring that city's streetcar system.

I'll admit first off that, in this case, the name of this series is a misnomer - at no point does the route of the Kenosha Electric Railway go underground. It may still work if you consider it metaphorically, though; despite it being one of the United States' newest light rail transit systems, it doesn't seem like overly many people are aware that streetcars once more ply the streets of Kenosha, Wisconsin, a city of just less than a hundred thousand people on the northern fringe of the Chicago commuter belt.

"Incongruity" doesn't begin to describe it. It seems utterly unbelievable that streetcars not only exist in modern Kenosha, but were reintroduced in 2000 nearly seventy years after the first system's removal, when that same transportation paradigm is under assault in places where it's been a mainstay for generations. Not only is it a tourist attraction in its own right, since streetcars aren't nearly as common in the Midwestern United States as they used to be, but an example that there's more than one urban design philosophy that works.

Yet they do. They do, and it's great. I was able to pay a short visit to Kenosha and its streetcar system on my way west to Vancouver - and beyond indulging my transit interests, it helped me say goodbye to home.

Go, read his thorough analysis and look at the cool pictures. (And yes, those are ex-TTC streetcars.)

At one point in Canada, the Red Tory--briefly put, a member of the Conservative Party opposed to neoliberalism and interested in social cohesion--was a powerful force. Not now in Toronto, though. Why? John McGrath explains in the Globe and Mail.

If you think the NDP and Liberals are shocked, talk to some downtown conservatives. The kind who talk about how much they love Spacing magazine or Nuit Blanche, the ones who are working on the Smitherman and Rossi campaigns – who thought this election would be sewn up on the centre-right.

The shock and confusion is palpable, as if these poor bastards woke up in an artillery barrage: “Hey, if we had a better idea of what was going on we wouldn’t be 20 points behind, right? I mean, fuck me,” says one Smitherman adviser.

One place to start, bewildered Smitherpeeps, is amalgamation. Even the people who served in the Harris government acknowledge it. “There was a perception that our party was anti-Toronto, or even that we hated Toronto,” says Janet Ecker, who was Minister of Finance when the Tories were chased out of Toronto into 2003.

Toronto Toryism couldn't possibly grow out of that scorched earth. Their flirtation with post-Harris moderation came in the form of John Tory, who may have lost to Miller in 2003 simply because people wanted a change from the conservative (and hilarious) Mel Lastman. Tory’s run against McGuinty in 2007 failed to impress suburban voters – who freaked right out over his school-funding proposal – and, more importantly, the city of Toronto, which saw the spectre of more upheaval over schools when we'd already had years of strikes under Harris. The high walls of the Liberal fortress remains unbroken, and Kumbaya verses and pot smoke still waft from the NDP camps. And for those who are too young to remember what the fuss was about, there is that beast of bombast, former Harris-ite John Baird, who alternatively drops the F-bomb on the city or rails against its “elites.”

First, Sarah Thomson, a dogged campaigner who nonetheless polled in the high single digits, has dropped out of the mayoral race and endorsed Smitherman. This will help this man.

Even more happily still, a recent poll suggests that Smitherman has a chance of winning.

The Global News Ipsos-Reid poll indicates Mr. Ford, previously the runaway frontrunner in Toronto’s mayoral race and still first among the top five candidates, may be losing some of his lead even as he prepares to roll out one of the more significant planks of his tough-on-spending platform.

A survey of 400 Toronto voters released Monday evening found Rob Ford leading with 28 per cent, compared with 23 per cent for his closest rival George Smitherman and 10 per cent for third-place candidate Joe Pantalone. Sarah Thomson and Rocco Rossi were tied, with seven per cent of respondents.

Significantly, this latest Ipsos-Reid poll indicates that if it was just down to the former deputy premier and the grandiloquent Etobicoke councillor, Mr. Smitherman would win – 48 per cent of respondents said they’d vote for him, compared with 45 per cent who said they’d vote for Mr. Ford if the Oct. 25 election were held today.

This latest Ipsos-Reid poll also gives Mr. Smitherman the lead downtown – an edge he’d lost in the last poll, which indicated Mr. Ford would win by a comfortable margin even in Toronto’s urban core.

The new results suggest pile-on efforts by other candidates in an “anyone but Ford” campaign attempting to staunch Mr. Ford’s runaway success may be having their desired effect.

Toronto's falling voter turnout--roughly 41% in the 2006 election--may also help Smitherman, since he's as popular among the people polled who say they'll vote as Ford. More, fear of Ford may make more anti-Ford voters come out.

The Yorkshire Ranter doesn't think that there's much to the theory that Iran has been attacked by targeted viruses.

this week has another superspy Iran story, Stuxnet, the worm that apparently attacks a Siemens SCADA application. Here’s JGC again, being sceptical. There’s a rundown at Alliance Geostrategique. The author of the theory that it’s an attack on the Bushehr nuclear power plant is self publicising here – I, for one, am not convinced that the fact they hadn’t got some software licence key in 2009 is great evidence, especially as the Windows .lnk exploit involved wouldn’t care either way. It’s the one from July in which Windows will execute code packed into the icon file for a desktop shortcut on a USB stick, so how pleased the Business Software Alliance is with the Iranians is here or there.

And it also seems to target Indian and Indonesian systems. Maybe its authors are protesting against Eat, Pray, Love.

To put it another way, I think we’re under a cyberattack from a sinister network of chancers and self-publicists who have glommed on to the whole issue as a way of getting their faces in the news and their hands into the till.

What he also notes is that Iran is making decidedly successful efforts to serve as a hub for Internet traffic in Afghanistan, where the national language of Dari is really just a dialect of Persian, and in adjoining Iraq. The Persosphere is certainly far from reclaiming its status as a language of wider communication and medium of culture, but it does seem to be organizing itself.

Way back in 2006, I blogged about how the Iranian government was putting impressive resources into aid to Afghanistan. One facet of this was that they had laid a fibre-optic cable from Iran to Herat; another was that the cybercafe in Kabul with the most bandwidth and the least censorship was the one in the Iranian cultural centre.

Now, it looks like the Iranian wholesale telco monopoly, DCI (Datacomms Iran), is becoming a significant transit provider to networks in Iraq, specifically Kurdistan, and Afghanistan, including the Afghan Government. As the good people at Renesys point out, this is perfectly sensible for the Kurdish operators – they’re getting rid of their expensive and slow VSAT links, and diversifying their sources of transit – but this is dependent on actually diversifying, rather than just replacing.

This would seem to more than make up for the delays in creating a multinational Persian-language television channel. Also, as he notes, the Iranian state's control of these Internet links lets it censor its domestic population at will. Que sera, sera.

If there's going to be water wars anywhere, then the basin of the Nile--roughly divided between relatively well-watered but economically underdeveloped uplands (Ethiopia, Uganda, et cetera) and almost completely Nile-dependent and more economically developed (hence heavier water consumers) Sudan and Egypt--may well be the place.

Upstream countries, looking to right what they say are historic wrongs, have joined in an attempt to break Egypt and Sudan’s near-monopoly on the water, threatening a crisis that Egyptian experts said could, at its most extreme, lead to war.

“Not only is Egypt the gift of the Nile, this is a country that is almost completely dependent on Nile water resources,” said a spokesman for the Egyptian Foreign Ministry, Hossam Zaki. “We have a growing population and growing needs. There is no way we can accept this kind of threat.”

Ever since civilization first sprang forth here, Egyptians have clustered along the Nile’s silt-rich banks. Almost all of the country’s 80 million people live within a few miles of the river, and farmers like Mr. Sharkawi have hardly changed their farming methods in four millenniums. Egypt’s population is growing briskly, however, and by the year 2017 at current rates of usage the Nile’s water will barely meet Egypt’s basic needs, according to the Ministry of Irrigation.

And that is assuming that the river’s flow is undiminished. Under British colonial rule, a 1929 treaty reserved 80 percent of the Nile’s entire flow for Egypt and Sudan, then ruled as a single country. That treaty was reaffirmed in 1959. Usually upstream countries dominate control of a river, like the Tigris and Euphrates, which are much reduced by the time they flow into Iraq from Turkey and Syria. The case of the Nile is reversed because the British colonials who controlled the region wanted to guarantee water for Egyptian agriculture.

The seven upstream countries — Ethiopia, Uganda, Tanzania, Kenya, the Democratic Republic of Congo, Burundi and Rwanda — say the treaty is an unfair vestige of colonialism, while Egypt says those countries are awash in water resources, unlike arid Egypt, which depends on just one.

The threat of losing Nile water has animated Egypt, which until recently had virtually ignored the upstream countries. And Cairo received another jolt this spring, when Ethiopia inaugurated a $520 million hydroelectric dam on a Nile tributary, part of a decade-long project to create a modern electricity infrastructure. Italy, Ethiopia and the European Investment Bank financed the project, according to Ethiopian media reports.

Adding urgency, say diplomats and water experts in Egypt, investors from China and the Persian Gulf region have expressed interest in underwriting enormous agriculture projects in Uganda and Ethiopia, which would use Nile water.