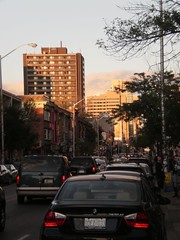 Another look east along Bloor through the Annex
Originally uploaded by rfmcdpei
What the title says.

As the National Post's Chris Selley writes, the decision of Sarah Thomson to end her campaign and support Smitherman for the explicit reason that he's not Ford may well end in Smitherman's election, despite Ford's simple populist message (as described by Gerald Hannon at Toronto Life).

[A] Global News Ipsos Reid poll released on Monday showed Mr. Smitherman within five points of Mr. Ford — just .1% outside the margin of error. Break the numbers down according to how likely respondents were to vote, and you find reason to believe the Anyone But Ford movement is indeed coalescing around Mr. Smitherman: He actually leads among respondents who say they’re “absolutely certain” to vote. If it was in fact a two-man race, Mr. Smitherman would win by three points over Mr. Ford; among “absolutely certain” voters, he’s ahead by a whopping 20.

These polls aren’t statistically comparable, and this narrative might not survive the next one. But if it’s basically true, Mr. Smitherman suddenly has his hands on a pretty useful, middle-of-the-road platform.

Crucially, he’s fiscally hawkish: His balanced budget plan, released on Monday, isn’t a thousand miles away from Mr. Ford’s. (It just isn’t Mr. Ford’s, which is the name of the game.) For example, Mr. Smitherman promises $332-million in savings by 2014 from a three-out/two-in attrition plan for municipal employees.

Mr. Smitherman has appealing little sound bites to toss out in various directions. He’s gay, meaning he has “an identification with minorities.” But he’s also the “son of a trucker,” so he’s a bit salty and fanatically opposed to Toronto’s world-beating gridlock.

He’s got a hodgepodge of non-ideological positions on lots of minor issues. There isn’t much room on the left between him and Joe Pantalone on the environment and the arts, and he supports the fair wage policy that means all city projects get built at unionized labour rates. But hey, at least he wouldn’t pay a premium for locally produced infrastructure like streetcars and subway trains. He is clearly not altogether comfortable with the Port Authority’s tunnel to the Island Airport, which you might think is nuts, but at least he can live with it. He knows we’ve got bigger fish to fry.

Suffice it to say, Tomasz Bugajski's blogTO post explaining his decision to engage in strategic voting is going to be highly prominent in my mind. Vote Smitherman, everyone! Vote Smitherman, and avert a terrible, terrible fate for Toronto!

It might be time to start supporting someone, though this raises a serious question for me and others in my position: do we just suck it up and vote for whoever has the best chance of beating the candidate we don't like? Or do we stick to our principals and only vote for the candidate who truly inspires us?

Unfortunately, following the second choice would mean rarely or never voting. It would also mean I'd have to disengage from the political process whenever it didn't reflect my exact needs.

It could be said that casting the wrong strategic vote is worse than casting the wrong honest vote. If your strategic choice turns out badly -- particularly if you didn't fully support the candidate in the first place, you might feel especially responsible. The wrong honest vote, on the other hand, is done from the heart and can't be blamed on an irresponsible gamble.

Despite this, I think it's important to take the risk. It's better than backing off and letting others make decisions for you. Though ideology will play a role in my decision (it would be hard for me to back a staunch conservative in general), I'm mostly concerned that Ford lacks the competence and leadership skills to run a city as complex as Toronto. Not only are his numbers are often wrong -- one small example being the Jarvis bike lanes that he said cost $6 million while the real price tag was closer to $60,000 -- but his track record shows no serious accomplishments over his ten years on council (although, I'll admit a Ford supporter might disagree with that last evaluation).

Did I mention that you should vote for Smitherman in the upcoming mayoral elections? Seriously.

The planetary system of Gliese 581, a dim red dwarf a mere 20 light years away, has become still more exciting: astronomers think that they have found Gliese 581g, a roughly Earth-sized planet located squarely in its parent star's habitable zone

An Earth-size planet has been spotted orbiting a nearby star at a distance that would makes it not too hot and not too cold — comfortable enough for life to exist, researchers announced today.

"Personally, given the ubiquity and propensity of life to flourish wherever it can, I would say, my own personal feeling is that the chances of life on this planet are 100 percent," said Steven Vogt, a professor of astronomy and astrophysics at the University of California, Santa Cruz, during a press briefing today. "I have almost no doubt about it."

His colleague, Paul Butler of the Carnegie Institution of Washington, in Washington, D.C., wasn't willing to put a number on the odds of life, though he admitted he's optimistic.

Estimates suggest Gliese 581g is 0.15 astronomical units from its star, close enough to its star to be able to complete an orbit in just under 37 days. One astronomical unit is the average distance between the Earth and sun, which is approximately 93 million miles (150 million km).

The Gliese 581 planet system now vaguely resembles our own, with six worlds orbiting their star in nearly circular paths.

Gliese 581g has a mass three to four times Earth's, the researchers estimated. From the mass and size, they said the world is probably a rocky planet with enough gravity to hold onto an atmosphere.

Just as Mercury is locked facing the sun, the planet is tidally locked to its star, so that one side basks in perpetual daylight, while the other side remains in darkness. This locked configuration helps to stabilize the planet's surface climate, Vogt said.

"Any emerging life forms would have a wide range of stable climates to choose from and to evolve around, depending on their longitude," Vogt said, suggesting that life forms that like it hot would just scoot toward the light side of that line while forms with polar-bear-like preferences would move toward the dark side.

Between blazing heat on the star-facing side and freezing cold on the dark side, the average surface temperature may range from 24 degrees below zero to 10 degrees Fahrenheit (minus 31 to minus 12 degrees Celsius), the researchers said.

Vogt's enthusiasm about the possibility of life on Gliese 581g may be a bit much. May; I've a weakness for tidelocked worlds and I'm inclined myself to believe in the ubiquity of life.

An implicit reason for the appeal of George Smitherman as Toronto mayor is the fact of his past service in the Liberal Party government of Ontario, indeed as a close partner of Premier Dalton McGuinty. It's been eight years since the Liberals were elected, however, and some polls indicate that his government may fall in next year's elections.

The Toronto Star-Angus Reid survey also suggested 86 per cent of voters feel it is harder to make ends meet now than it was two years ago and 71 per cent fear Ontario “is on the wrong track.”

“As I travel across the province ... people can no longer afford the Dalton McGuinty government,” Progressive Conservative Leader Tim Hudak said Tuesday.

“People are increasingly frustrated and tired of getting nickel-and-dimed to death. Every time they turn around, Dalton McGuinty is whacking them with some new tax increase, hydro rate increase or user fee. Families just can't afford it anymore and that's why they want change,” he said.

Of decided voters, 41 per cent supported Hudak compared to 29 per cent for McGuinty's Liberals, 22 per cent for NDP Leader Andrea Horwath, and 8 per cent for Green Party Leader Mike Schreiner.

It's an online survey, mind, and it is a year to the next election. Nevertheless.
Collapse