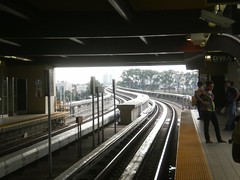 On the Scarborough Rapid Transit track
Originally uploaded by rfmcdpei
The Scarborough rapid transit line, built in the 1980s in response to concerns in the 1970s that--as James Bow writes at Transit Toronto--there was much too large a gap between downtown Toronto and the most urbanized areas of Scarborough to justify extending the subway east to that latter area, might be something of a disappointment (too out of sync with the rest of the TTC network, too old, too orphaned, too uncomfortable). One thing that's undeniable is that the curving grooved tracks look awesome as they leave and enter the stations.

eye weekly's Shawn Micallef paid a visit to a promotional barbecue that Rob Ford was holding at his mother's house in Etobicoke. Unsurprisingly, he confirmed that his supporters weren't bizarre or bad, and that many of Ford's opponents were being elitist.

This party was fun, not earnest. Nobody was evil, crosses and bicycles weren’t being burnt and the crowd, while pretty white, wasn’t exclusively so, running at perhaps 15 per cent visibly multicultural (a higher percentage than a lot of Queen West art openings I’ve been to). People were nice. Rob’s mom, who looks like everybody’s mom, was running around taking pictures with people.

An odd thing happened as I was Tweeting: at first, online followers were in the spirit of our fun and somewhat gonzo act, but when it became clear we weren’t going to Tweet about how awful and, as Howard Moscoe might say, illiterate Ford supporters are, I started to pick up some hostile reactions. By simply going to Ford’s BBQ, and not thinking they’re freaks, it seemed to some folks on Twitter that my companion and I were endorsing him. Neither of us was toeing the narrative line we’ve been told to believe about Ford supporters since he started to run. Now that he’s leading, that narrative is dangerous.

It all comes down to the failure of Toronto's left-wing--Miller and his heirs, particularly--to articulate anything that could appeal to Ford's base. In the "Three Torontos" schema, Ford's support is drawn disproportionately from the relatively declining suburbs. Is it any wonder that, absent any clear signal from City Hall, these suburbs' inhabitants might go disproportionately in Ford's direction?

The Ford supporters at the BBQ reminded me a lot of the working-class crowd I grew up with in Windsor: same “regular folk” but here in Toronto without Windsor’s long tradition of organized labour involvement and NDP voting to swing general sentiments in a leftish direction. Reader’s Digest by the toilet, white wine cut with 7UP and wood-panelled basements — this is comfortable territory but not highly politicized. Money is always an issue, though, and the whiff of waste isn’t taken lightly. Ford’s tapped into this and swung people who down south would be called “Reagan Democrats.”

That’s why the continued mocking of his supporters, his issues and his weight have given him momentum. His simple message resonates with these voters, people who aren’t radical and likely wouldn’t identify as right wing. It’s a kind of apolitical politics. In Windsor, the left filled this space. In Toronto, the roles are reversed. Ford’s campaign is beyond facts, now, which require smart thinking. The rise of the Ford Nation is as much a communication problem of the progressive side of Toronto as it is Ford’s regular-guy charisma.