The organic ribbing surrounding this elevated passenger crossing, stretched out high above McCowan Road and linking the Scarborough Town Centre complex with the McCowan rapid transit station, easternmost and lonely last of the line, caught my attention one fine summer day. 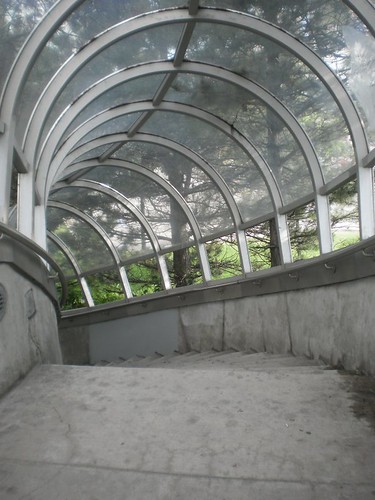 Then, the view from the street. 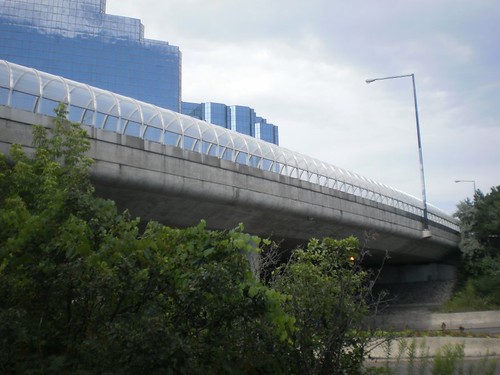 Many North Americans following the news have probably heard of a sudden upsurge of teenage gay suicide. The thing is, it's not a sudden upsurge; it's been well-known for quite some time that queer youth are subject to a terribly elevated risk of suicidality and attempts at suicide. Andrew Solomon in The Noonday Demon argued that this increased suicidality is a phenomenon common to any number of marginalized groups. More specifically, Dan Savage is certainly right in pointing out that the homophobia of adults--opposition to same-sex marriage, say, or a more general opposition to a "homosexual lifestyle" whatever that is--feeds directly into homophobic bullying no matter how much these adults might deny a connection.

The recent intensity of the coverage of some recent teenage gay suicides does take me aback. Might it be that, after several decades of attempts in North America to humanize queers--we're people too, after all--and steady progress in gaining recognition of the basic right to exist freely without legal or social prejudice, the mass of people are finally getting that homophobia is a very bad thing? Might a tipping point have been reached?