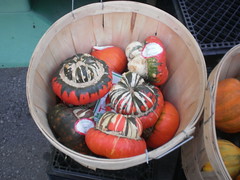 Annex Gourds
Originally uploaded by rfmcdpei
The textures and colours of these gourds, on sale at a grocery in the Annex, remind me of works of art, and of the gourds at my maternal grandparents' home.

First, I'd like to welcome two new blogs to my blogroll.

Blog #1 is Economic Woman, a blog by freelance Toronto journalist Allison Martell concerned with politics, gender issues and feminism, and economics. A good recent post is her "Why do we vote strategically?", wherein she argues that if a vote for one's preferred candidate is considered meaningless a vote for a less favoured candidate will have even less effect.

Blog #2 is Matt Warren's The Long Game. Concerned with issues of science and human beings from a futurist's perspective, one nice post is "The Avatars of Mockery", wherein he links the stereotype-filled Cameron film Avatar with muppets.

Via MacLean's, I've learned the happiness that, despite the government's previous position and actions, citizenship guides will now include explicit references to gay rights, including same-sex marriage.

The next printing of a guide designed to educate immigrants applying for Canadian citizenship will contain references to gay rights -- ones that Immigration Minister Jason Kenney had vetoed for the current version.

Conservative MP Rick Dykstra, parliamentary secretary to Kenney, said Wednesday the government will include references to the legality of gay marriage in Canada and prohibitions against discrimination based on sexual orientation in the next version, due out within months.

"As with everything else, the potential for evolution and improvement is there," Dykstra said in an interview.

Gay rights were already included in the "Welcome to Canada" guide for newcomers published this summer, he said, paving the way for the Harper government to take a "very, very good step forward" with the next printing of the "Discover Canada" citizenship guide.

The current citizenship guide -- released nearly a year ago, in November -- had not been updated since 1995.

Critics slammed the government at the time for its selective telling of Canadian life, a chorus of complaints that got louder when access-to-information documents obtained by a news outlet revealed Kenney blocked references to the history of gay rights and the legalization of same-sex marriage in 2005.

If the Liberal government of Paul Martin hadn't pushed through same-sex marriage in time, we'd have been left to hope that the Conservative government would willingly follow the rulings of different courts. That would not have been an easy process.

The very oil reserves that will soon make Canada an energy superpower are making the loonie a petro-currency. Already around parity with the greenback, the Canadian dollar will soar to unprecedented heights against the U.S. dollar as triple-digit oil prices pull more and more daily oil production from the tar sands. And a strong dollar means one thing to hockey fans: NHL franchises leaving Dixie and the desert, and moving to Canada.

Sounds great, until you start to do the math and realize that the more oil Canada produces, and the higher the loonie goes, the less steel, machinery and even cars the rest of the economy will produce. We’ll see how Canadians come to like their economy being at the other end of Americans’ gas nozzle.

Or maybe we shouldn’t be speculating how “Canadians” will feel about the experience, since we will be thinking about it more as, say, Albertans and Ontarians, or Newfoundlanders and Quebeckers. Soaring oil prices and a muscular loonie won’t be a problem for Alberta, since the U.S. will soon have to buy most of its oil imports from Canada no matter what the exchange rate. However, it could prove to be a tad more problematic for the manufacturing sector in the industrial heartland of Ontario and Quebec.

Albertans flush with oily money will be able to spend their powerful loonies to buy whatever they like, but good luck to anyone trying to export something other than oil, particularly if it is produced by skilled workers paid in a strong Canadian dollar. Whether it’s cars or unpasteurized Quebec cheese, it’s getting more expensive in the U.S. market every time the loonie gains ground on the greenback. And Maritimers, who will soon be paying triple-digit prices for the oil they import from Venezuela, aren’t likely to be crazy about a big premium exchange rate either. When American tourists see their Visa bills from their Canadian vacations, chances are they won’t be coming back, even if our beer does taste that much better. While a premium Canadian dollar will likely bring back some long-lost NHL franchises to Winnipeg, Quebec City and maybe even Hamilton, that’s about all it will bring from the U.S.

The interesting stories of late suggesting that Poland is quickly something of an economic power--its economy actually grew during last year's Europe-wide recession-- in central and eastern Europe, if not Europe-wide. It may have been a mistake not to include Poland in the G20.

When Czech solar plant builder Photon Energy AS decided to raise money two years ago in a stock sale, it bypassed Prague and went to the Warsaw exchange.

Photon isn’t alone. Poland hosted 1.59 billion euros ($2.2 billion) of initial public offerings last year, placing it third in Europe behind NYSE Euronext and London, according to PricewaterhouseCoopers LLP. It has added 117 companies since the beginning of 2009. Prague hasn’t had an IPO since 2008 as trading volume dropped 53 percent during the past two years.

“The Prague Stock Exchange is to me an internet cafe where the same people always trade the same 10 to 15 papers,” said Georg Hotar, Photon’s co-owner and chief financial officer, in an interview last month in Prague. “The market doesn’t fulfill one of its primary functions, to be a place where companies can raise capital. In Poland, they can.”

The Warsaw Stock Exchange, where listings on the main market rose to 385 from 225 in the past decade, will become emerging Europe’s first publicly traded bourse next month after the state sells a 64 percent stake. In the same period, the number of companies traded in Prague dropped to 26 from 151 as the lack of institutional investors makes it difficult for companies to raise money.

The new listings have helped triple the value of Polish- traded shares to $189 billion since February 2009. The market is now bigger than Austria’s at $122 billion and the Philippines’s at $129 billion. Prague market capitalization is $47 billion.

Prague fell behind Warsaw as the Czech government chose to sell state-run companies such as carmaker Skoda Auto AS directly to foreign owners while companies such as lender Ceska Sporitelna AS were delisted. Companies also prefer to get bank loans than tap the stock market for funds because they would have to disclose financial information, said analyst Silvio Kotarac at KBC Groep NV’s Patria Finance brokerage in Prague.

Poland’s market has been helped by IPOs of state assets and by laws that force pension funds to invest 95 percent of assets inside the country. Taxpayers are legally obliged to put a portion of their social-security taxes into one of 14 private funds, which jointly managed 201 billion zloty ($71 billion) in August. Stocks represented 33 percent of their holdings, data on the financial regulator’s website show.