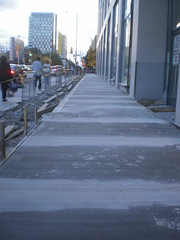 New sidewalk
Originally uploaded by rfmcdpei
The concrete was still drying outside the new condo development at Bloor and St. George downtown.

I can't say that I'm surprised. While I've nothing but good memories of the Green Room, I also have never eaten anything there after the first time I went.

On September 22, Toronto Public Health shut the Green Room down. For the fourth time in two years, the popular Annex hangout had failed its health inspection—two times more than any of the sixteen thousand other restaurants, bars, and "premises" that fall under Toronto Public Health's purview. It hasn't reopened since: a sign tucked in the alleyway entrance says that "Green Room is temporarily closed for renovation," and a manager says they'll be back on October 15. But they might not, ever. What's more, the owner (current or former, depending on who you ask) is nowhere to be found—not at the Green Room, and not at any of the other downtown restaurants thought to be associated with him. For now, he's a ghost, and soon, his restaurant might be too.

Since December 23, 2008, the Green Room has amassed no fewer than eighty-six cited health infractions from Toronto Public Health's Food Safety Program, all collected in their DineSafe Establishment Inspection Report. Of that staggering number, fifteen infractions are in the "critical" category, the most severe and serious; these cover things like "fail[ing] to ensure food is not contaminated/adulterated" (in the Green Room's case, twice), "fail[ing] to prevent a rodent infestation" (also twice), and "fail[ing] to wash hands when required" (once). The City of Toronto has taken legal action against the Green Room several times for those violations: the restaurant's fines since the beginning of 2009 now rest at $6500, a total that's likely to rise as a result of the September 22 inspection, which resulted in seven court summonses.

Over the last two years, the Green Room's infractions have netted the restaurant three Conditional Passes (a sort of probation, which sees the restaurant re-inspected shortly thereafter) and four Closed notices by order of Toronto Public Health. One particularly bad four-day stretch, from February 3 to 6 in 2009, saw the Green Room receive a Conditional Pass, fail its subsequent inspection two days later and be forced to close for "fail[ing] to prevent gross unsanitary conditions," and then, a day after that, while they were closed, fail another follow-up inspection, be issued another Closed notice, and be cited for even more infractions—including one for failing to properly display their food safety inspection notice from the day before.

Canada failed to win a seat in the recent election for temporary seats on the United Nations Security Council. Canada has a long history of filling these temporary seats, and the Harper government had expected that Canada would gain a seat this time. So not the case.

In Tuesday’s election, Portugal garnered 113 votes in the second round, less than two-thirds of the ballots cast, which is the hurdle for a win. Canada received just 78 votes. As a third round of voting commenced, Canada announced it would no longer seek the seat.

Germany, heavily favoured ahead of the vote to secure a seat, won the other seat up for grabs in an earlier round of voting.

The results of Tuesday’s election, in a secret ballot cast by representatives of the UN’s 192 nations, mark a major setback for Canada’s international ambitions.

Although ambivalent about the campaign earlier, the government switched gears and made it a priority. Ottawa had paid keen attention to the United Nations in recent weeks.

The Prime Minister delivered two speeches there in September, the first at a development summit and the second at the organization’s opening debate. Foreign Minister Lawrence Cannon made several trips to New York to woo diplomats in person and attended Tuesday’s vote, saying earlier in the morning that he was “confident” of Canada’s chances.

Why? The Harper government has blamed its moral foreign policy and Liberal Party leader Michael Ignatieff's questioning of whether or not Canada actually merits the seat based on its policies (what Ignatieff identifies as opposing measures to deal with climate change, cutbacks on aid to Africa, and ignoring the United Nations until the time came for Canada to campaign).

The debate over what Canada's failure means may well be protracted, but isn't going to generate any significant shift since neither Conservatives nor Liberals (nor NDP, for that matter, who share in the Liberals' opinion) are going to change their policies. Yay.
Collapse