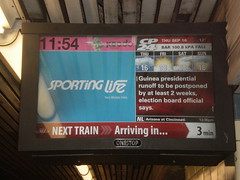 A Onestop video screen
Originally uploaded by rfmcdpei
It's hard to believe it's been just a couple of years since the TTC bought video display screens from Onestop for its subway stations, providing information on train arrival times and brief news excerpts and the time and the weather and silent video. I like them, actually; the experimental film and photos and such that they sometimes display adds a further bit of colour to my life.

A new poll conducted over Thanksgiving weekend shows a dead heat between Toronto mayoral frontrunners Rob Ford and George Smitherman, with the former deputy premier edging the Etobicoke councillor by one percentage point.

Of the 400 people surveyed in the Ipsos Reid poll, conducted for Newstalk 1010, 31 per cent said they plan to vote for Mr. Smitherman – and 30 per cent supported Mr. Ford. Deputy mayor Joe Pantalone garnered 11 per cent of the vote, while 4 per cent of those polled said they’d vote for Rocco Rossi if the vote were held tomorrow.

Mr. Ford, whose mantra of cutting waste at City Hall has given him momentum since he entered the race in March, became the candidate to beat after Labour Day. Mr. Smitherman has sold himself as the candidate most likely to defeat the Etobicoke councillor, and it appears to be working: He has won endorsements from both sides of the political spectrum – from the likes of councillor Joe Mihevc, who said he would otherwise have supported Mr. Pantalone but is worried about his ability to defeat Mr. Ford, and writer Peter C. Newman, who had previously supported Mr. Rossi but subsequently changed his mind for the same reason.

The poll also indicated a sizable number of voters are still on the fence, however: A quarter of those polled said they still have no idea whom they’ll vote for come Oct. 25. And while the majority – 54 per cent – of those polled said they intend to cast a ballot on election day, voter intention was highest in Etobicoke, (73 per cent), followed by Toronto (60 per cent), East York (53 per cent), Scarborough (51 per cent) and North York (38 per cent). Mr. Pantalone’s supporters said they’re the most likely to vote, with 72 per cent saying they intend to cast a ballot. He’s followed by those supporting Mr. Smitherman (65 per cent), Mr. Ford (57 per cent) and Mr. Rossi (37 per cent).

Further helping Smitherman out, his likely competition Rocco Rossi has withdrawn from the campaign, likely in response to (among other things( that 4$ support.

Liberals within his camp and without had been putting pressure on Rossi to bow out a couple of weeks ago as it became clearer his Tory-lite campaign was failing to gain traction with voters on the right gravitating to Rob Ford, and those closer to the centre backing George Smitherman.

The final straw came last night. Rossi’s somewhat unlikely run for mayor ended officially in the hours after an Ipsos-Reid poll commissioned by CFRB found him way backing the pack – again – at four per cent of decided voters.

In reality Rossi’s campaign has been in desperate shape since the post Labour Day bump he got (very short lived) for proposing a tunnel to nowhere and following that with a wild stab at name recognition with Mafioso-inspired print and radio ads. None of it worked.

Rossi tried to persevere, even as prominent members of his campaign were jumping ship and the letters urging him to drop out to stop Ford from prominent supporters like Peter C. Newman were being leaked to the media.

eye weekly's Shawn Micallef pretty much expresses my opinion when he says that the sudden shift in strategic voting that drives the anything-but-Ford movement that has propelled Smitherman isn't inspiring, but then, it's better than the alternative of Ford as mayor. Far better.

The winner will know that lots of folks reluctantly came around to them and, as they say, held their nose and voted. In an ideal world, that candidate would recognize that Toronto’s centre, left and right, came around and reluctantly placed their trust in them for four years. In that time, other, more appealing candidates will emerge, one hopes. Our new mayor will need to appeal to these swing voters and govern Toronto accordingly. Ideally.

The Canadian dollar briefly peeked above parity with the United States dollar today, but as Nicholas Babad noted in the Globe and Mail, that's due to the weakness of the American economy rather than the strength of the Canadian.

The loonie hit a high of $1.0019 U.S., then slipped back to just below parity. It’s not so much that the Canadian currency is rising as it is the U.S. dollar falling, noted Scotia Capital currency strategist Camilla Sutton. In fact, the loonie has underperformed compared to other major currencies. The greenback today fell to a new 15-year low against the yen, for example, and the Australian dollar also closed in on parity, a level it hasn’t hit in almost three decades.

"The last time the currency moved through parity was in early April of this year," Ms. Sutton said. "That move was based on a strong [Canadian dollar] fundamental outlook (strong sovereign position, outperforming domestic fundamentals, the expectation for [Bank of Canada] interest rate hikes, and bullish investor sentiment).

"This most recent move has actually been on the back of weakening [Canadian dollar] fundamentals (Canada’s close ties to the U.S. are weighing on the growth outlook and the BoC is not expected to raise interest rates again until the second half of 2011). This implies that [the Canadian dollar] should continue to strengthen until the broadly based [U.S. dollar] weakness completes. By our estimates there is still further to go."

Myself, if the Canadian dollar were to attain parity and stay there--as it did for a while a year ago--I'd prefer it not be through the Barb Wire route of American immiseration.

Over at History and Futility, my co-blogger The Oberamntman has an interesting essay up exploring the history of Alsace, a contented Franco-German battleground, through the persona of a leading Alsatian historian.

Rodolphe Reuss, one of the most important historians of early-modern Alsace, died in 1924. I ordered one of his books from the local library today, and instead of getting the one I wanted I got his basic Histoire d’Alsace. This may still be the standard work on Alsace. The first edition was published before World War One (the sixth edition was in 1912); later printings have continued at least through 1977, probably later. I happened to get one from 1934.

Reuss was very unhappy with the Franco-Prussian war. He cut off contact with German historians for at least some time. After the war he was the major figure in reorganizing and rebuilding the devastated library holdings, destroyed by German artillery. He was also extremely active in local Protestant circles.

Alsatian history today seems anachronistic. Germany and France are no longer going to war every generation or so hoping to get it back. The EU Parliament is in Strasbourg. It is doubly old-fashioned because many of Alsace’s first historians, many of them quite good, never got over the legalistic arguments over whether or not France really acquired it in the Treaty of Westphalia. Language borders, patois studies, and so forth contributed to arguments of who Alsace should belong to. With the decline of nationalism as a teleological endpoint to history, these sorts of studies vanish, in the sense that they are no longer used to prove one man’s point.

I became interested in a blog entry on him when, idling, I opened the book and saw the dedication. It obviously came with a new, postwar edition, because it was to his three sons. All three of them died in 1914-1915 fighting for France.

So what happens when history, the history we study, is important to us in our daily lives? I am not referring to what it would mean if my family came from Alsace. This is a case where a historian has made his whole life where he studies, including taking sides (France, although not to a propagandist level until after World War One) in a conflict over your homeland. He watches his scholarship and future scholarship burn in the flames of war, spends decades salvaging what can be salvaged, and then watching it happen again. The second time it happens, though, he’s more preoccupied with the deaths of his only sons to worry too much about the library.

In MacLean's, Nicholas Köhler with Patricia Treble ask an interesting question. What is crime--not just reported crime--so much lower in Ontario and Québec than in western Canada? More stable populations, with better social programs and a more even distribution of wealth, seem to be key.

Of the largest 100 cities or regions in Canada, the 10 safest are in Quebec and Ontario, Canada’s two most populous provinces. The Ontario city with the highest crime score is Belleville, population 51,000 and ranked 15th worst (cities in B.C., Alberta, Saskatchewan and Manitoba flesh out all the positions above it). The first Quebec city to show up is Montreal, ranked 24th, despite the fact it’s the third biggest city in Canada. Toronto is a sleepy 57th, while Peel, York and Halton regions—Toronto’s populous, sprawling suburban ring—have among the lowest crime scores in the country. So what gives?

Criminologists are divided on the question of why Central Canada sees the least amount of crime—and in particular violent crime—and why police-reported crime rates climb as you head west. One popular theory focuses on where crimes are more likely to be reported—for example, that western Canadians “have a tendency to be more law-and-order, and so therefore report more crimes,” as Mount Royal University criminologist Doug King puts it.

King, based in Calgary, doesn’t actually buy into that theory—he thinks the West’s demographics and tightly packed but isolated cities can tell the whole story. But Irvin Waller, a criminologist at the University of Ottawa, points out that reporting levels in Ontario and Quebec have been dropping for years. According to the Canadian Centre for Justice Statistics figures for 2004, the most recent published data available, just 30 per cent of all victimization incidents get reported to police in Ontario, the lowest in Canada (Waller says victims of sexual assault are the least likely to contact police). And most victims who report crimes do so not because they think police can help, but as part of an insurance claim.

So maybe Ontario isn’t all that safe after all. Quebec, however, has the highest reporting in Canada, at 40 per cent. Waller speculates the difference has much to do with the victim services programs available in Quebec and largely absent in Ontario, where, he says, compensation amounts are smaller, there are fewer applicants, and “we have a bill of rights for victims that is worth absolutely nothing.”

Yet even if Ontarians reported more crime, that wouldn’t erase the gap between Central Canada and the West. Why? Tanya Trussler, a sociologist at Mount Royal University, says that Quebec and Ontario are more broadly middle class than the West, where a wider income gap helps fuel crime. Still, if experts believe Ontario only seems safer, its eastern neighbour actually boasts many of the safest communities in Canada. It has an older, more law-abiding citizenry, and receives fewer migrants than, say, Alberta, which contributes to a more commonly held view of what’s socially acceptable.

Laissez-faire doesn't work, not in this domain, at least.
Collapse