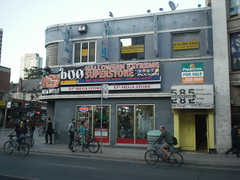 Once a dollar store ...
Originally uploaded by rfmcdpei
Once housing a rather decent and convenient dollar store on Yonge just north of Wellesley, this building now houses an almost-certainly-temporary Hallowe'en store. Boo.

In a recent edition of his column Savage Love, Dan Savage--well--savaged a woman who said that she didn't appreciate being attacked for her denomination's opposition to homosexuality, especially inasmuch as it was blamed for the suicides of gay teens.

The kids of people who see gay people as sinful or damaged or disordered and unworthy of full civil equality—even if those people strive to express their bigotry in the politest possible way (at least when they happen to be addressing a gay person)—learn to see gay people as sinful, damaged, disordered, and unworthy. And while there may not be any gay adults or couples where you live, or at your church, or in your workplace, I promise you that there are gay and lesbian children in your schools. And while you can only attack gays and lesbians at the ballot box, nice and impersonally, your children have the option of attacking actual gays and lesbians, in person, in real time.

Try to keep up: The dehumanizing bigotries that fall from the lips of "faithful Christians," and the lies about us that vomit out from the pulpits of churches that "faithful Christians" drag their kids to on Sundays, give your children license to verbally abuse, humiliate, and condemn the gay children they encounter at school. And many of your children—having listened to Mom and Dad talk about how gay marriage is a threat to family and how gay sex makes their magic sky friend Jesus cry—feel justified in physically abusing the LGBT children they encounter in their schools. You don't have to explicitly "encourage [your] children to mock, hurt, or intimidate" queer kids. Your encouragement—along with your hatred and fear—is implicit. It's here, it's clear, and we're seeing the fruits of it: dead children.

Looking solely at the example of the Roman Catholic Church---the largest Christian denomination in Canada, and the world--the potential for this kind of spillover for condemnation of the condition to condemnation of the individual seems quite clear. Just look at Ratzinger's statement in the 1986 document "On the Pastoral Care of Homosexual Persons": "When [the claim that homosexuality is not disordered] is made and when homosexual activity is consequently condoned, or when civil legislation is introduced to protect behaviour to which no one has any conceivable right, neither the Church nor society at large should be surprised when other distorted notions and practices gain ground, and irrational and violent reactions increase." A 1992 followup argued that banning discrimination against homosexuals would affirm the homosexual condntions, that people who are in the closet and don't act out their sexal orientation don't need protection anyway, and that the recognition of families organized around same-sex couples would harm the institution of the family. It seems almost as if the people responsible for these teachings would be disappointed if the people they condemned didn't get attacked one way or (perhaps nudge nudge, wink wink) another.

As anyone who has played the game telephone knows, messages can distorted easily, the culmination of a series of subtle errors in transmission--misunderstandings, willing or otherwise--as passed between people and groups. The fewer errors that are needed to separate a relatively benign (or relatively less malign) message from one relatively malign, the easier it is for the message to make that shift. It doesn't seem at all unreasonable to hold the people who let this happen responsible. The effects of religious homophobia constitute but one example; I'm sure my readers can think of others.

And you? What do you think? Do you agree, disagree? What examples come to mind?