Walking through Union Station, I saw with Andrew the sorry remnants of TTC Transit Stuff, the only and the disappointing and the recently closed gift shop of the TTC. Talk about bad public relations. 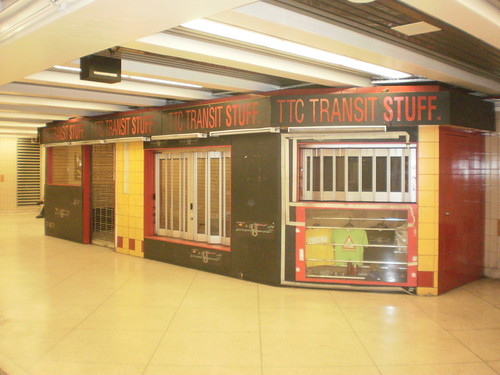 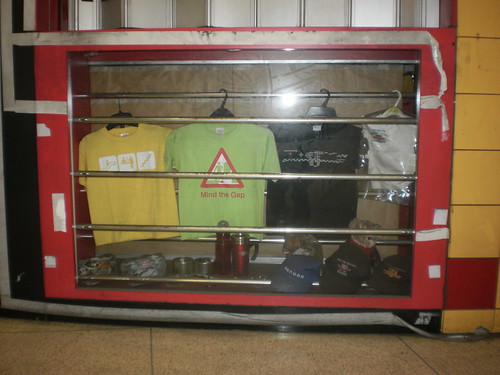 The Economist's Babbage blog explores the social networking scene in South Korea. I'd earlier mentioned South Korea as one of the few holdouts against invincible Facebook. That may be changing.

NAVER, a search engine with email and blog services, has more traffic in South Korea than any other site. It’s only one of several home-grown web services here with loyal audiences. But Twitter is now growing faster in South Korea than almost anywhere else in the world, and Facebook users have doubled since April of this year. In an effort to stem the tide, Naver has launched a prime-time ad campaign with the slogan “Go Social”. And it has, sort of. The company designed its new social networking tools to keep users entirely within its own suite of products, gathered together in a place Koreans call “Naverland”. And while Facebook recently announced globally that it would allow users to export all of their personal data, Naver is betting that it won’t have to make the same concession in South Korea. It is forcing Koreans to make a binary choice: Naver or not.

Naver has launched a Twitter-like service called “me2DAY”, a Facebook-like service called “NAVER Me”, and “NAVER Talk”, a text- and instant-messaging service. But Naver, as one Korean blogger puts it, runs a gingerbread house. Unlike Google, Naver almost never collaborates with smaller companies on new services, but builds everything itself. It is difficult to move personal data in or out of Naver. And it tacks new services onto a bright, cluttered homepage. The gingerbread house is full of treats. Why would anyone need to leave?

"That’s not what 'Social’ is," read the most popular article this week on Bloter, a tech site. The article describes a "lock-in effect". When several different social networking services share data as a block – as with Naver’s Go Social tools or TGIF – users tend to avoid the moving cost of transferring data between blocks. That is, a smart-phone owner who tweets is more likely to choose Facebook as a social network; once on Facebook, the user is even less likely to adopt any of Naver’s interlinked services. Bloter argues that the lock-in effect is breaking in favor of foreign services: Twitter, Google, the iPhone and Facebook. This will be hard to overcome, even with Naver’s celebrity marketing.

I first reading about the apocalypse predicted by the Mayans in 2012 sometime in early 1990 when I read, in the January issue that year of Omni magazine, about the phenomenon in a listing of possible apocalypses. What's 2012 about? Let me cut and paste from the relevant Wikipedia article.

The 2012 phenomenon comprises a range of eschatological beliefs that cataclysmic or transformative events will occur on December 21, 2012, which is said to be the end-date of a 5,125-year-long cycle in the Mayan Long Count calendar. Various astronomical alignments and numerological formulae related to this date have been proposed.

A New Age interpretation of this transition posits that during this time Earth and its inhabitants may undergo a positive physical or spiritual transformation, and that 2012 may mark the beginning of a new era. Others suggest that the 2012 date marks the end of the world or a similar catastrophe. Scenarios posited for the end of the world include the Earth's collision with a passing planet (often referred to as "Nibiru") or black hole, or the arrival of the next solar maximum.

Scholars from various disciplines have dismissed the idea of catastrophe in 2012. Mainstream Mayanist scholars state that predictions of impending doom are not found in any of the existing classic Maya accounts, and that the idea that the Long Count calendar "ends" in 2012 misrepresents Maya history. The modern Maya do not consider the date significant, and the classical sources on the subject are scarce and contradictory, suggesting that there was little if any universal agreement among them about what, if anything, the date might mean.

It's all pseudoscience, of course. This talk turns out to be quite possibly basically, factually wrong; according to a researcher, the Mayan calendar was translated to the Gregorian incorrectly.

A new critique, published as a chapter in the new textbook "Calendars and Years II: Astronomy and Time in the Ancient and Medieval World" (Oxbow Books, 2010), argues that the accepted conversions of dates from Mayan to the modern calendar may be off by as much as 50 or 100 years. That would throw the supposed and overhyped 2012 apocalypse off by decades and cast into doubt the dates of historical Mayan events. (The doomsday worries are based on the fact that the Mayan calendar ends in 2012, much as our year ends on Dec. 31.)

The Mayan calendar was converted to today's Gregorian calendar using a calculation called the GMT constant, named for the last initials of three early Mayanist researchers. Much of the work emphasized dates recovered from colonial documents that were written in the Mayan language in the Latin alphabet, according to the chapter's author, Gerardo Aldana, University of California, Santa Barbara professor of Chicana and Chicano Studies.

Later, the GMT constant was bolstered by American linguist and anthropologist Floyd Lounsbury, who used data in the Dresden Codex Venus Table, a Mayan calendar and almanac that charts dates relative to the movements of Venus.

"He took the position that his work removed the last obstacle to fully accepting the GMT constant," Aldana said in a statement. "Others took his work even further, suggesting that he had proven the GMT constant to be correct."

But according to Aldana, Lounsbury's evidence is far from irrefutable.

"If the Venus Table cannot be used to prove the GMT as Lounsbury suggests, its acceptance depends on the reliability of the corroborating data," he said. That historical data, he said, is less reliable than the Table itself, causing the argument for the GMT constant to fall "like a stack of cards."

The term "cultural appropriation" is one I'm leery about using, but in this case, the appropriation of the traditional Mayan calendar by New Agers on the basis of sloppy "research" intent on dating their rapturous apocalypse, it's a term that's entirely correct. I detest it when indigenous peoples are used as sockpuppets for the latest cause of the month--indigenous peoples, and their individuals, deserve to be treated with the basic respect owing every other culture and everyone else.

I've a post up and History and Futulity that takes a look at the case of Hossein Derakhshan, an Iranian blogger recently of Toronto sentenced to nearly twenty years of prison in Iran for his opinions. Blogs and social networking generally haven't overthrown the Iranian government, and aren't likely to, but they do create interesting spaces.

I've a post up at Demography Matters taking a look at Tunisian demographic developments. Yes, that country's well advanced in the demographic transition, with its working-age population peaking nicely.
Collapse