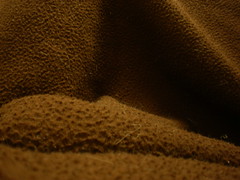 Blanket
Originally uploaded by rfmcdpei
Call this my abstract phase. You can find beauty even in mundanities, like blankets. This is why I love photography.

Daniel Drezner recently took on the arguments of Malcolm Gladwell and The Social Network re: the flaws of social networking systems like Facebook.

Let's start with Gladwell, because it's the lesser of the two arguments. Gladwell contrasts the relationships and connections forged on Twitter/Facebook with real-world movements. He argues that the latter work when based on a hierarchical structure with strong ties among the participants. The former is based on a networked structure with weak ties.

[. . . He] doesn't describe networks all that well. Networks eliminate neither hierarchical power nor strong ties -- they're simply expressed in different ways. Actors in central nodes, with lots of dynamic density among other actors, can command both power and discipline. Not all networks will look like this, but the ones successful at fomenting change will likely resemble it. To put it more precisely: social networks lower the transactions costs for creating both weak ties and strong ties, loose collaborations and more tightly integrated social movements.

Drezner also argues--and I most fervently agree--that the implciit argument of The Social Network that Facebook cheapens and weakens relationships is false.

) The Mature Generation tends to disdain the technology as yet another example of the world going to hell in a handbasket.

2) For the Maturing Generation, the new technology is both a blessing and a curse. The adroit learn how to use the new technology to vault to social, political or economic heights that they would not have otherwise achieved. At the same time, a new technology without new social norms inevitably creates confusion about what is acceptable and what is taboo. Some people lose status as a result.

3) For the Youngest Generation, the technology isn't new by the time they come to use it. They're savvy in the ways that the technology is both an opportunity and a risk, and can navigate those waters without thinking too hard. For this generatioon, the social technology is part of the new normal.

better idea as to how the great cats acquired their spots. (I love academic studies available to the public, by the way.)

The animals' dark, rosette-like markings, and those of other wild cats, are evolution's response to the creatures' surroundings and to whether they hunt by day or night, say researchers at Bristol University.

Cats that hunt on open, rocky ground by daylight tend to have evolved plain-coloured coats, while those that pounce from rainforest tree branches typically sport dappled fur. In each habitat, the cat's markings improve its camouflage and make it a more effective predator.

For smaller cats, fur colour can help them hide from larger carnivores.

Will Allen, a behavioural ecologist, studied the coat patterns of 35 wild cat species and compiled details of their habitats, hunting styles and when they went on the prowl.

Cats with complex and irregular markings, such as the familiar spotted leopard, were commonly found in dense, dark forests and hunted at night.

Ten cats in Allen's study had plain coats and lived in open, often barren landscapes. The sand cat is found in the arid deserts of Asia and Africa and has particularly furry feet to protect them from the scorching sands.

The plain-furred Pallas's cat melts into the treeless steppes of central Asia, while the small Andean mountain cat has a silver-grey coat that matches the rocky landscape.

In some parts of the world, jaguars and leopards are completely black, an adaptation that only seems to arise in species that live in a diverse range of habitats.

In the study, Allen asked volunteers to match the fur of different wild cats to computer-generated coat patterns that varied from plain and simple to complex and irregular markings. When Allen compared the markings across the cat family tree, he found that similar patterns emerged quickly and several times during feline evolution.

This inevitably leads me to wonder about Shakespeare. 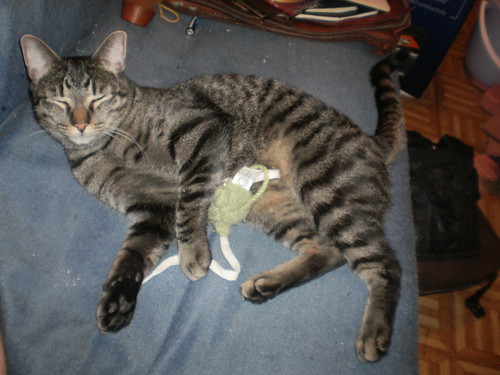 Shakespeare on the futon (3)
Originally uploaded by rfmcdpei

With his dark coat marked by rings of grey, is Shakespeare product of a lineage adapted to city living?

And so we come back to Mylène Farmer's 2002 single "C'est une belle journée".

This song, one of the new singles from her 2001 best-of collection Les Mots, was a hit in France, ranking #5 on the French pop charts and #11 on the Walloon charts. I love the song, just as much as I did back in January 2009; I have the song's 2002 four-track CD digipack single, with the original song and three great remixes.

I mentioned once that the first time I visited Montréal back in 199, I bought a CD copy of Kate Bush's "And So Is Love", and internalized from it--incorrectly, I think, but what did I know?--a message that all was bleak, would be bleak, and I should reconcile it. I've been thinking about those feelings a fair bit, before and during and after I did my "It Gets Better" vlog. Mylène Farmer is a bit of a grim artist; Wikipedia's authors call it a catchy and joyful song, also a dark song that sees the dark side of life and actually needed its lyrics edited ("Je vais me coucher" was originally "Je vais me tuer," "I will go to sleep" versus "I will kill myself"). I downloaded the song, and her other songs, back in 2000 and 2001 and 2002, when popular music was one of my few ways to access the outside world, one of the things that made me feel part of a broader community. Call her music something that reflected the tenor of my life in those days; call her music also a gateway; call the song's final lyrics as offering some kind of hope.

When did I buy the single? I bought it while I was moving away, the first time I'd been there in years, at a time when I felt more optimistic about my life and was fumbling towards happiness, and finally, thank God, leaving Prince Edward Island behind. It entered the world, and for good.

I've a post up at History and Futility that takes a look at the importance in my life, in human consciousness and in global affairs, and asks our readers how popular music matters for them.

News like this is doing a good job of convincing me that life is a property of the universe, that wherever suitable niches exist there will be life just as surely as if sufficient material orbits a young star there will be planets.

[A]n experiment that simulates chemical reactions in the atmosphere of Titan, Saturn’s haze-shrouded moon, adds a new location to the list of unexpected places where life could have begun — in the sky.

The study used radio waves as an energy source, simulating the action of ultraviolet radiation from the sun that strikes the top of Titan’s thick atmosphere and breaks apart molecules such as methane and molecular nitrogen. The experiment is the first to produce amino acids and the nucleotide bases that make up DNA and RNA — the basic ingredients of life — without the need for liquid water, says Sarah Hörst of the University of Arizona in Tucson. She and her colleagues presented the findings in Pasadena, Calif., October 7 at the annual meeting of the American Astronomical Society’s Division for Planetary Sciences.

The results suggest that Titan’s upper atmosphere, about 1,000 kilometers above the frigid moon’s surface, produces compounds capable of supporting life. And because planetary scientists believe that Titan represents a frozen snapshot of the early Earth, the study also indicates that terrestrial life might have formed within a primordial haze high above the planet rather than in a primordial soup on the surface, Hörst says.

Planetary scientist Jonathan Lunine of the University of Arizona, who was not part of the study, notes that the compounds found in the experiment “are relatively simple precursor molecules to life, and so there are a lot of additional steps between such molecules and life itself, most of which will likely require a liquid, such as water or methane.” However, he adds, everything that forms high in Titan’s atmosphere ends up in the moon’s lakes and seas of methane.

I've a post up at Demography Matters reporting on a news article announcing Morocco's recent deportation of hundreds of migrants from Sub-Saharan Africa to a desolate spot on the Algerian frontier. This says things about Morocco's role as a transit country, from Sub-Saharan Africa to europe. It also implies interesting things about Morocco's fate. If the Straits of Gibraltar become impenetrable, and Morocco remains (as it has) substantially richer than its neighbours south of the Sahara, doesn't this suggest that Morocco might also accumulate a large immigrant community?