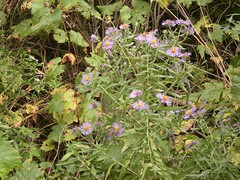 Weed (2)
Originally uploaded by rfmcdpei
This may be a weed, but it's a pretty weed. Can anyone identify it for me?

Over at Bad Astronomy, Phil Plait reported about a surprising pair of planets in the NN Serpentis binary system perhaps 1700 or so light years away. Why are they surprising? They survived the transformation of the system's main star from stable main sequence, to red giant, to white dwarf after blowing off vast layers of itself into the neighbourhood.

They orbit each other very rapidly: a complete orbit only takes about 3 hours! So those stars are really hauling. As it happens, the orbit is seen almost edge-on from here on Earth, so we literally see the stars pass in front of each other twice per orbit. That’s pretty cool, because it means that over a short time we can watch lots of eclipses and get really good statistics on how long the eclipses last, what the time period is between them, and so on. What the astronomers found is that the period of the eclipses is very slowly changing, and the best explanation is that of the two planets tugging on the stars as they orbit.

Where things get really weird is when you look at the stars, or more specifically, the white dwarf. These are dense balls of compressed material left over when a star like the Sun dies. As it ages, a star like this will turn into a red giant, swelling up to hundreds of times its current size, and blow off vast amounts of material. Over tens of thousands of years or more, it loses mass, shedding its outer layers. Eventually, all that’s left is the core of the star, a hot compact object we call a white dwarf.

So that one star in NN Ser must have once been a star like the Sun which swelled up, blew off its material, then became a white dwarf. But wait a second… when it was a red giant, it was probably a hundred million kilometers across! But the other star in the system, the red dwarf, is only a few hundred thousand kilometers away. How does that work?

[. . . How did the planets survive?] There are two scenarios. One is that they formed along with the stars long ago, and somehow survived this cataclysm. However, this strikes me as pretty unlikely. When the primary star went red giant and started blowing off matter, it was losing mass, and therefore its gravity got weaker. That means its hold on those planets would’ve gotten more tenuous, and they would have migrated outwards. This in turn means they would’ve been much closer to the star in the past. But we know the red dwarf is there, and while it’s a dinky star, it’s far more massive than a planet. It’s very hard to see how planets could be in stable orbits so close to such a massive object. Models show they’d be ejected from the system relatively quickly.

That makes it unlikely they formed with the two stars. That leaves the second scenario: they formed after the primary star turned into a red giant!

That’s pretty weird, too. But some models suggest that as the red dwarf spiraled into the core of the red giant, a massive disk of material would form around it. This disk could then be the raw material from which the two planets were formed. That seems fantastic to me as well, but look: we have two planets orbiting a very tight binary star where one is a white dwarf and the other is red dwarf. Something weird must’ve happened here! The real choice is to pick which is the least bizarre.

This has relevance for our neighbourhood, as the bright stars Sirius (8.6 light years away) and Procyon (11.5 light years away) are close binary stars featuring a stable star and a white dwarf. Planets around these stars could have survived.

I've a post upat History and Futility reflecting on the rails of North America, about Amtrak's potential and VIA Rail's limitations, with a Kraftwerk video included. Go, read and comment.

I've a post up at Demography Matters making the point that immigrants are economically necessary no matter how they're reviled, and that global demographic change may mean that soon countries will be competing over the scarce resource of manpower.