One of my History and Futility co-bloggers wrote about government.

If I own a car, I generally don’t have much of an idea of what’s under the hood. Oh, I have a basic idea of how the fuel-injected internal combustion engine works, but I’m not a car enthusiast, and so I don’t actually know more than the basics of what makes my car run. If I know the functions of an alternator, a solenoid, the O2 sensor, etc., it probably means that my car has severe problems. If I don’t know what these functions are, it means I’m being taken care of.

Now then, when it comes to things outside of my specialization, I’m a reasonably well-informed American college graduate. I read the paper, get the main stories, and often watch the news. I see some of what goes on in government, but a whole lot of what happens is hidden from my sight, taken care of by the experts who’ve spent their entire lives on this sort of thing. Sometimes, though, something goes wrong, and a process I shouldn’t be aware of comes directly into view. When this is the case, it means that someone hasn’t been doing their job.

Most people would prefer pece, order, and good government, in the words of the familiar Canadian mantra, to the sort of public excitement that indicates that something has gone wrong, that the people in government who presumably know how to govern without ruckus have failed, at least at avoiding ruckus.

The Canadian example that comes to my mind ridiculous gutting of the Canadian census. There had been no wide-spread movement against supposedly intrusive questions, I can assure you; I'm reasonably certain that there hadn't been something less high-profile. But the federal government chose to do what it did, notwithstanding the objections of any number of governments and business organizations and NGOs, despite the very good statistical reasons in favour of keeping the long-term census, and thanks to any number of apparent lies (the minister responsible claimed that thousands of e-mails had been sent to his office alone in protest, yet only two dozen could be found everywhere).

Does this mean that the best kind of democratic government is the kind that avoids controversy, with responsible representatives and competent ministries and a well-trained civil service behind the scenes? Or is ruckus necessary for effective democratic government, not as a permanent feature but as a way of communicating the fact that's something's wrong? Is it possible to distinguish between relatively productive and relatively unproductive kinds of ruckus?

History and Futility co-blogger The Overamtman corrects the popular assumption that the 1648 Peace of Westphalia created an international (or at least initially Western) international state system characterized by states possessing full sovereignty, autocratic states at that. Not true.

The Peace of Westphalia established sovereignty embodied in a dynastic ruler, not an autocratic one. Even “Absolute” France was not particularly autocratic. Essentially all of the rulers represented in the Treaties of Münster and Osnabrück had important constitutional checks on their power. These were not written constitutions, of course, but neither is modern Britain’s. Princes had often extremely defined rights and strong limits on their authority. Contrary to much historical narrative, many of these princes were also quite happy with this. They were brought up in a society in which there were rules and orders, and they obeyed them.

these princes were not autocratic. They had a very specific legitimacy based on ancestry and kept their legitimacy by ruling according to expectations. One of the stated purposes of the Imperial Courts was to stave off and overthrow abuses within the states, including preventing princes from becoming autocrats (see: Württemberg, anytime between the sixteenth and eighteenth centuries) and more than once defending peasants against their not</i>-sovereign princes. Indeed, German princes would not start claiming sovereignty for themselves until Napoleon, after the important advances in sovereignty ideology [identified with the Revolutions.</i> 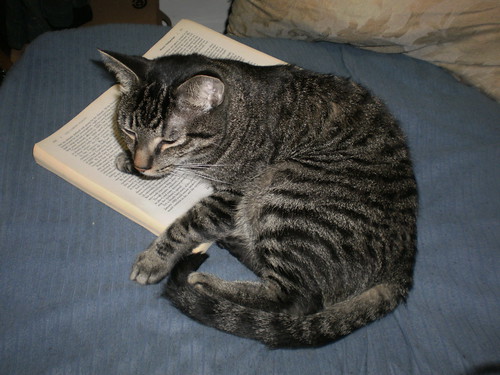 Frequently, Shakespeare lies or falls to sleep on my books while I'm reading them. Frequently, I let him. 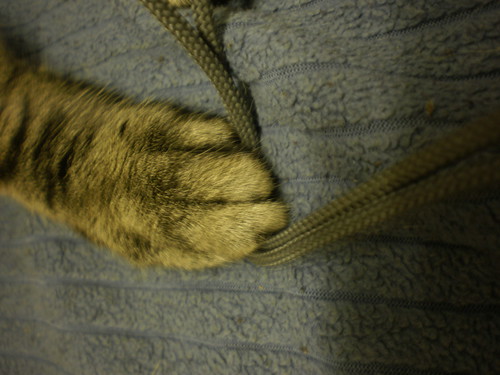 The cat's ability for play has always impressed me. Here, he's caught up in my camera's cord. 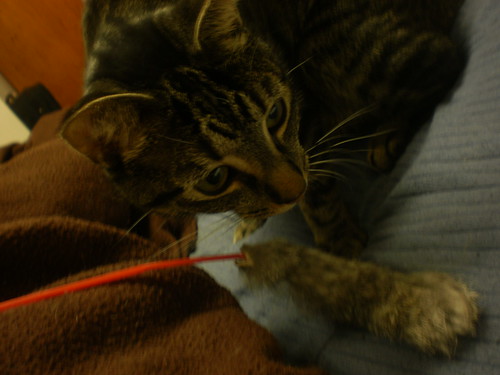 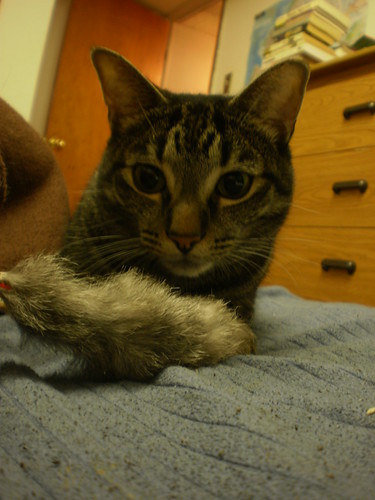 Shakespeare has many toys, but his favourite is this fur-on-a-stick. He likes it; you can see it.
Collapse