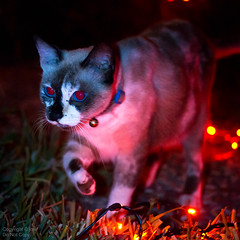 Devil Kitty
Originally uploaded by jciv
When I saw this picture in Flickr's Cats group at Google Reader, I recognized it as the perfect Hallowe'en cat picture. Photographer jciv kindly gave me permission to reproduce the photo here.

The subject of the photograph is Jingle, perhaps four and a half years old; her owner the photographer found her as a kitten. You can find many more non-eerie photos of Jingle via this search.

And on a related note, I strongly recommend jciv's photography. The interesting lighting that he uses for his pictures, close-ups and otherwise, creates genuine experiences.

Hallowe'en started off as a festival linked with the breaching of walls between the supernatural and natural worlds and the resulting unheimlichness, but it's since become a matter of fun without any fear.

In The Know: Has Halloween Become Overcommercialized?

(Well, it has in most places.)

As one reader noted, some time age--a decade, with Buffy?--vampires stopped being monsters of the id and are instead now mostly exotic sex partners. The rehabilitation of zombies I've seen in mainstream fiction--even teenage fiction!--would have surprised most people five years ago. Yes, I can see how the mute isolation experienced by zombies could map onto high school, but still. Is it that the exotic just isn't as intrinsically terrifying as it once was?

There's still room for terror in our lives, in those moments where the wall between the expected and the unpredictable breaches and we're left to cope with what's erupted into our world. It still happens.

My most terrifying night? The early morning of the 5th of February, 2002, easily. In the first hours after I'd recognized I had a sexual orientation, I felt ashamed that I hadn't recognized it before. Pushing past that shame for a moment, I realized that I needed to enlist the help of other people to try to manage this, since even after the past couple of years of slow twitchy improvement I was lacking. Who did I know in town who'd be able to help me, immediately and as a friend?

"Dear God, what have I done to myself."

Over at History and Futility, The Oberamtmann reacts to Jon Stewart's rally. What I saw and heard of the rally was fantastic. My co-blogger's reaction makes me appreciate it more; the rally was really about the antithesis to fear, a new sort of mobilization in a time of tension.

Pundits say there is too much political apathy among the younger voters. We just do not care, what with our video games and facebook. We do care. We care a lot. Growing up in the current poisonous American political culture means that apathy is often the only sure way to prevent insanity or depression. We cover our ears and go LALALALALA because it is the only way to get through the day. We could stop and listen, but all we learn is that the other side hates America and wants to kick our grandmothers and rape our goldfish. Sure, we could pick one of the screaming sides, but that is not what most people want. We want to be heard without shouting and we want to hear the news without being bombarded with idiocy. Satire seems to be the only way to cut through the crap. If you want us to be more engaged, try treating America’s citizens like intelligent, rational human beings who know how to handle large amounts of critical information. The biggest joke may be that it takes a Comedy Central program to not only recognize that, but deliver the goods.