It must saying any number of things that I'm now hoping that David Frum--here, in the National Post--is right. About a lot of things, including the consequences of a Republican victory in the House of Representatives.

Horribly ironically, the vote will likely lead instead to higher taxes and more spending. That’s not what Republican voters want. But based on Republican House Minority Leader John Boehner’s pre-election interviews, it’s what they are likely to get.

The Bush tax cuts expire at the end of December. When they do, income tax rates jump for virtually everybody who pays income taxes. Capital gains taxes will rise, ditto taxes on estates and corporate dividends.

To renew the tax cuts will require a vote in the House, a vote in the Senate and a signature by the president — in other words, a deal between Democrats and Republicans.

You’d think such a deal would be reachable. But when Boehner has spoken in the past about compromise, he was slapped down by his own followers in Congress. Now Boehner has changed his message. On the Sean Hannity radio show Wednesday, Boehner declared: “This is not a time for compromise.”

The dirty secret of the tax-cut battle is this: President Obama is actually very happy to see the tax cuts expire forever, so long as he does not get the blame. If the Republicans volunteer to look unreasonable, Obama gets the (for him) best of all possible worlds.

Republican disinterest in controlling medicare spending, which is the largest and most quickly-growing government program in America, isn't going to help the party achieve its goals, either.

Yet again, the Kuril Islands are bedevilling Russo-Japanese relations.

Japan protested Russian President Dmitry Medvedev’s visit to a disputed island chain, at a time when the Japanese government is locked in a row with China over a separate territorial claim.

Medvedev today visited Kunashir, one of four islands called the Southern Kurils in Russia and the Northern Territories in Japan. During a three-hour trip, the first by a Russian leader to the islands, he toured a geothermal power plant and a newly built kindergarten. The island is known as Kunashiri in Japan.

The visit “is incompatible with our basic stance and hurts the feelings of the Japanese people,” Maehara said during a 20- minute meeting with the Russian envoy, according to the statement. Bely said Medvedev’s trip, which came as he returned from a regional summit in Hanoi, was a domestic matter, and that a worsening of Japan-Russian ties would benefit neither country.

The trip, a deliberate “provocation” toward Japan, aims to bolster Russia’s prestige at a time when Russian leaders are taking a more accommodating stance toward the U.S. and Europe, said Masha Lipman, an analyst at the Carnegie Moscow Center.

The various claims made by Russia and Japan strike me as somewhat legalistic, Japan's rather more than Russia's. Is claiming that Russian rule over the Kuril islands should be invalid because the Soviet invasion of Japanese territory in 1945 was in violation of the Soviet-Japanese Neutrality Pact really a good idea? The Russian arguments, honestly, make more sense to me. Using force to settle boundaries between the former Axis powers and their neighbours was accepted elsewhere in the theatres of the Second World War, and in many cases these borders have remained, undisputed and uncontroversial, even after the Cold War ended. Italy hasn't tried to reclaim western Slovenia and the Istrian peninsula, say, or Germany Silesia, or even--pardon the pairing--Finland the Karelian isthmus. Whatever the maritime boundaries between Russia and Japan on the shores of the Sea of Okhotsk were before 1945, after 1945 they changed. Japan might almost as well demand the Karafuto--the southern half of Sakhalin island, an entire prefecture in itself--also lost to the Soviet invasion.

Japan continued claim to that unfortunate archipelago isn't a good expenditure of its energies. Leaving aside the small size and economic irrelevance of the islands, and the fact that Japan's continued claims have done nothing to help that country's relationship with Russia (the trend has been for the Russian population to increasingly oppose returning the Kurils, or even the southernmost islands of said), the islands would be a money sink. It wouldn't be as relatively expensive as, say, the costs to Germany of an annexation of Kaliningrad (never mind of the DDR into the Federal Republic), but why spend the money needlessly when the Japanese government is already hugely in debt? There isn't even a large number of deportees, even of the second and third generations; less than twenty thousand people lived on the four disputed islands in 1945. Continuing to dispute the Kurils has hugely disproportionate costs.

There's also irony. With the expected amount of snark, South Korea's Chosun Ilbo remarked that Japan's involved in disputes with other countries on the Asian continents on some islands lying between Japan and the Asian mainland. The author even suggests that Japan is being hypocritical, denying the relevance of a historically grounded Korean claim to that island.

From Japan's perspective, it controls the Senkaku Islands, so they are not disputed territory. The Kuril Islands are under Russian control, but it believes they clearly belong to Japan from a historical perspective and must be returned. But the Dokdo islets are said to be "illegally occupied" by Korea and must first of all be established in international eyes as disputed territory. This is why Japan continues to make provocative comments about the Korean islets.

Without judging the merits of Japan's other maritime disputes, engaging in disputes over maritime boundaries on any number of conflicting grounds with all of Japan's neighbours isn't smart. Just saying. 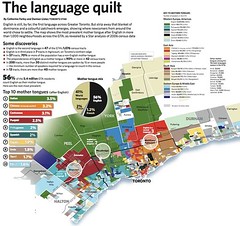 It was about the time that someone compared mayor-elect Rob Ford to Hitler on this blogTO discussion thread--prompted, incidentally, by the news that the webmaster of a guide to Toronto buildings had closed down his website because he now felt contempt for a city that would elect Ford--that I started to lose hope for the possibility of civilized discourse.

Back in January 2008, I llnked and reproduced one of Catherine Farley and Damien Listar's maps of languages in Toronto, derived from the 2006 census and published by the Toronto Star on the 30th of December, 2007, showing the most important languages ranking after English in the thousand or so census tracts in the Greater Toronto Area.

In all, 56% of the Greater Toronto Area's population of 5.4 million claims English as a mother tongue, with Chinese languages ranking second at 6% of the population. Further behind are Italian, Punjabi, Portuguese, Spanish, Tagalog, Urdu, Tamil, Polish, and Tamil, with speakers of French accounting for only 1.2% of the city's population.

In only three areas do speakers of languages other than English outnumber Anglophones: Punjabi-speakers in the satellite city of Brampton, Italian-speakers in suburban Woodbridge, and Chinese-speakers in the Scarborough community of Agincourt and neighbouring Markham just to that community's north. Other notable relatively concentrated language enclaves include speakers of Polish in southwestern Toronto and Mississauga, speakers of Portuguese to their east, speakers of Greek along the Danforth, Tamils in eastern Scarborough, Tagalog-speakers in the Regional Municipality of Durham, and Russophones along the Bathurst Corridor.

So. Rob Ford country is at least as ethnically diverse as the downtown, if not more so. His stupidities about immigration aside--only a quarter of the hundred thousand immigrants he said were coming to Toronto annually actually are coming--I find it really hard to believe that he would have gotten elected by these multiethnic suburban people--especially given the significantly elevated voter turnout--had they perceived him to be racist. I'm sorry, Kapuskasing is not going to become the next Dachau. 2010 Canada is not 1939 Germany. Ford's bigotries are those of an isolated suburbanite, not the reflexes of a génocidaire in the making, and civil society and the rule of law and City Council and everything else, really, would be more than enough to restrain him if he was. And if he was, he wouldn't have been elected; Torontonians aren't sharpening their machetes.

The right in Toronto has problems. The left does, too, greater ones as evidenced by its failure to capture the suburban vote and the many minor insulting ways in which people opposed to Ford are talking about him, and about suburbanites. The number of fat jokes alone is distressing--sure, they may be somewhat better than making gay jokes about the out Smitherman, but that's faint praise indeed. Contempt is a profoundly, profoundly stupid strategy for any significant number of Ford's opponents to adopt. Unless they don't want to win but be a self-righteous minority, that is.

Australian blogger Jim Belshaw of Personal Reflections recently visited Greece, and found the time to write about Crete and its interesting and long history outside of the Greek state (joined in 1908 after a period of autonomy from the Ottoman Empire, only recognized internationally in 1913). Earlier still, it was a Venetian possession, a key element of that republic's Mediterranean thalassocracy

The geo-political position facing Venice was quite complicated. It was a city state. However, like Athens before it and England later, it ruled a maritime empire. Trade was central. In turn, this made naval power central.

Venice grew as the centre of the Eastern Roman Empire in the west, it prospered because of its later relations with the Byzantine Empire, the biggest European power of the time. A constant stream of secret messages passed into Venice to inform the Government. These, together with the Papal archives, provide a picture of the complex relationships in the Mediterranean at a time when England was still emerging.

The merchants of Venice were, I think, practical men. They had little time for the more arcane religious disputes. These were things to be managed. Yet, as practical men, they faced a conflict between a dollar in the hand now and the longer term. Venice's role during the Crusades gave them an immediate gain in terms of wealth and power, but the damage done to the Byzantine Empire on which their wealth actually depended arguably doomed them in the longer term. However, that doom was sometime coming.

To hold their new territory, they built forts. The Forteza at Rethymno is a huge construction. Designed to protect the harbour the town grew up around it.

At its peak, Venice had some 3,000 warships with more than 30,000 crew. All Venetian ships were designed to be multi-purpose, with cargo vessels required to carry armaments. So the old harbour below must have been crowded with craft of various type.

The fortifications themselves seemed mainly designed to protect from the sea. Yet they were also built at at a time when gunpowder was about to become important. This changed the military equation, because it meant that even the most powerful fortifications were more vulnerable. Even so, I did wonder just how a place like this might fall.P1010161

In 1645, four hundred plus years after Venice took control of Crete, the Ottoman Empire began its attack.

Four hundred years! That's a remarkable time span, even if dwarfed by the time that the various Roman Empires controlled Crete. I wonder if Australia can last that long?

The battle wasn't easy. The siege of Candia to the west lasted from 1648–1669. The last Venetian outpost finally fell in 1718. Still, now the Ottomans were in charge, even if this seems today as just a flick of an historical eye-lid, less than two hundred years.

So far as the Forteza was concerned, the Ottomans were not going to waste an important military asset. They modified it as required, but otherwise maintained it.

I've a post up at Demography Matters taking a look at the problems facing China's census. The desire of parents to hide their unauthorized, illegal children from census-takers--notwithstanding promises of reduced penalties--is certainly going to complicate the accuracy of the census' data.
Collapse