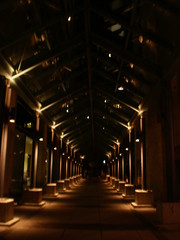 Down the aisle
Originally uploaded by abitmoredetail1
Another vestige of that walk with Andrew, the sight of these illuminated pillars stretching into the distance caught me. A pity the closest pillar on the right wasn't properly illuminated.

Co-blogger The Oberamtman at History and Futility has a post up announcing an ongoing series of posts bringing to bear the perspectives of historians on the past, the present reality, and the possible future evolution of the sport of baseball. It matters.

One of the reasons so many fans are so incredibly passionate about baseball is the history. There are constantly questions of where a person, a team, a game, a series ranks in history. There are more books about baseball history in some form or another than probably all the other major American sports combined. They are better, too. There are myriad reasons for this. For one, baseball writing has always been lyrical. For another, since individual accomplishments are so much easier to recognize in baseball than other team sports, it is easy to become a passionate fan and follow the player’s career. For a third – and when discussing serious history, probably the most important – baseball is deeply embedded in the fabric of American social and cultural life. There is a reason the steroids scandal hit baseball so much harder than the NFL.

There is quite simply a stronger emotional attachment to baseball. Jackie Robinson’s arrival in the major leagues is still considered a pivotal moment in American racial history. It certainly gets mentioned more often than, say, the integration of the armed forces during World War Two. While there are some idioms and metaphors borrowed from basketball and football, there are many more from baseball. Americans have turned to baseball to ease their sufferings one national crisis after another. Some think we are too cynical to still fall for that, but does anybody not believe that the 2001 World Series did not help New York recover from 9/11 that much faster?

The world will be empathic, or it won't be. Seriously. If human civilization is going to survive the 21st century, with its risks of general catstrophe, the most important trait human civilization will need to develop is a concern for the basic security of people around the world, not just the negative action of recognizing that one community's sufferings can't be isolated from one's own, but the positive action of recognizing that other people are beings worthy of concern and doing things to help people, to care about the fate of even the different are people recognizably like ourselves.

I think we're getting better. I caught on to this after I read French philosopher Alain Finkielkraut's 2000 In the Name of Humanity, which made the case that people really are doing better. As world populations grow larger and larger, extending from the primordial communities of dozens of people to nation-states with populations ranking in the hundreds of millions of people, the societies in which these people live in organize themselves on increasingly altruistic lines, with a strong collective identity that extends to a concern for the well-being of people. If this empathy works in nation-states of hundreds of millions of people, even billions, and if projects like the European Union are succeeding, surely it's not too much to imagine a successful project that will extend to everyone? We even care for the rights of animals, indeed talk of them having rights.

All well and good. But then, in 2005, Finkielkraut himself gave an interview to Ha'aretz in which he came off as pretty racist. Writing about the multiracial French national soccer team, he said that “People keep telling us that the French team is admired because it is Black-White-Arab, but today it is Black-Black-Black which is making all of Europe laugh. It’s true that you have only to apply a little affirmative action in the Blue team for the whites to play better, better, or as well as the blacks.” (He said he gave the interview to Ha'aretz only because he thought no one in France would learn what he said. It's available in the original Hebrew here.) When he was called, he later said that someone who was not him said it.