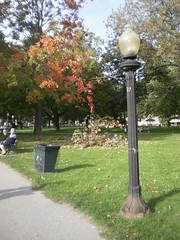 Allan Gardens after the wind
Originally uploaded by randyfmcdonald
An October windstorm in Toronto left the skies above Toronto's Allan Gardens park clear, even as it tore branches down to the ground.

Wired's Kim Zetter reports on the latest news re: that computer virus which made the headlines. It looks like it was designed as a weapon.

The Stuxnet worm was discovered in June in Iran, and has infected more than 100,000 computer systems worldwide. At first blush it appeared to be a standard, if unusually sophisticated, Windows virus designed to steal data, but experts quickly determined it contained targeted code designed to attack Siemens Simatic WinCC SCADA systems. SCADA systems, short for “supervisory control and data acquisition,” are control systems that manage pipelines, nuclear plants, and various utility and manufacturing equipment.

Researchers determined that Stuxnet was designed to intercept commands sent from the SCADA system to control a certain function at a facility, but until Symantec’s latest research it was not known what function was being targeted for sabotage. Symantec still has not determined what specific facility or type of facility Stuxnet targeted, but the new information lends weight to speculation that Stuxnet was targeting the Bushehr or Natanz nuclear facilities in Iran as a means to sabotage Iran’s nascent nuclear program.

The malware, however, doesn’t just sabotage any frequency converter. It inventories a plant’s network and only springs to life if the plant has at least 33 frequency converter drives made by Fararo Paya in Teheran, Iran, or by the Finland-based Vacon.

Even more specifically, Stuxnet targets only frequency drives from these two companies that are running at high speeds – between 807Hz and 1210Hz. Such high speeds are used only for select applications. Symantec is careful not to say definitively that Stuxnet was targeting a nuclear facility, but notes that “frequency converter drives that output over 600Hz are regulated for export in the United States by the Nuclear Regulatory Commission as they can be used for uranium enrichment.”

“There’s only a limited number of circumstances where you would want something to spin that quickly -– such as in uranium enrichment,” said O Murchu. “I imagine there are not too many countries outside of Iran that are using an Iranian device. I can’t imagine any facility in the U.S. using an Iranian device,” he added.

Go, read the article in full.

Acts of Minor Treason's Andrew Barton came up with a way to incorporate some of the traits of science fantasy into harder science fiction. Which ones?

Take, say, space pirates. A staple of the genre going back decades - ruffians for the square-jawed Interstellar Patrol to bring to heel, marauders who stand to take away everything our crew of intrepid space merchants holds dear - because they're easy villains easily understood by the audience, a transposition of Earth onto the stars. But the model that's so frequently used, that of space pirates shrieking in out of nowhere to fall upon a rich cargo, plunder the craft and disappear with the booty in their hidden base, doesn't work. All it would take is one person looking through a telescope in the right direction... and a spacefaring society wouldn't be conducting skywatches with just one person looking through a telescope. Nor could they shriek in out of nowhere; unless they have a point-to-point FTL, which brings up a raft of its own problems for organized societies, the target ship would see them coming from quite a long way off. Nor would they be able to hide; the anomalous heat signature generated by a pirate base would be easily detectable by a patrol.

This in mind, how can you keep the space pirate? Exoplanets hold the solution.

Hot Jupiters are something that science fiction never really thought of in a big way, but since the first one was discovered orbiting 51 Pegasi in 1995, they've upended our understanding of how solar systems can be built. They're gas giants that can orbit their parent star well closer than Mercury orbits Sol, and as a result they're superheated and volatile. The scientific interest alone is undeniable, assuming you have the ability to get there - preferably through an "only works at specific locations" FTL like the Alderson drive, at least in my books. What I figured is that these hot Jupiters could also provide space pirates with new Spanish Mains.

There's an important assumption here, first: that starships can refuel themselves with hydrogen, or other gases present in gas giant atmospheres, and that they are capable of entering them in order to collect them. If that's the case, space pirates don't need to be space pirates at all, technically speaking; they can be air pirates, striking at starships as they descend into the atmosphere to refuel. Inside the atmosphere, there is a horizon and stealth is possible. They could operate from aerostat habitats in a relatively calm portion of the atmosphere, if such a thing exists, and limit their attacks; in that way, a ship's disappearance could easily be put down to violent weather conditions.</span>

All this demonstrates that being ingenuous can have great results.

I've a post up at History and Futility, first of a series annotating a post by Michael Steeleworthy at The Zeds ("On information literacy, information-seeking, and microfilm") examining how old methods of information storage like microform still have their uses and attractions. For me, the attraction lies in their profound romance: the past matters for all of its oddities.

At History and Futility, the Oberamtmann has a post up, inspired by a recent essay in the Chronicle of Higher Education by an essay-writer for cheating students, examining just what's going on there and how this issue can be solved.

I am not sure what the proper answer is. While specialty essays that align closely with class material might help prevent buying old papers off the internet, it will not stop people like Ed Dante who write new papers. History might be the most difficult of these because research papers demand giving the students a lot of time. This means more time to find a paper mill and also gives procrastinators more reason to freak out when it is due the next day and they have not started yet.

The problem does not lie with the capitalistic, if immoral or amoral, essay mills. The problem is systemic within the universities. Students should all take a writing class when they get to college. They should be taught by English professors – not graduate students – and begin with a hard, deep instruction of grammar rules. I have a confession to make: I do not know my grammar rules. Well, most of them. I know how to write because I spent a lot of time reading while growing up. The only grammar rules I know well are the ones that haunt me, like passive voice (thanks, German!). There should be lots of short assignments. And no group editing. None. Zilch. It will just turn back to highschool “group” activities when I and you would do all the work, partly because they were lazy. Partly because we did not want our grades in their hands.

There should also be multiple professors. Maybe it should be a required year-long course. With history professors who come in and teach how to do basic citations, plagiarism rules, and setting up an argument. Creative writing professors can give lectures on developing one’s own voice. Bring in all the humanities professors in rotation. Make it heavy on technical knowledge, though. Do not make it fun. We can have it pass/fail if you like, with the chance to write a paper beforehand (in class) to try to graduate out of it. What do you think?

Why do gay males have generally lower incomes than straight males?


Why do lesbians generally have higher income than straight females? It’s almost the inverse of the gay-male trend.

The average age at which people come out as gay, lesbian or bisexual has fallen steadily over the last four decades, according to Stonewall, the gay rights group.

The survey, conducted via social networking sites, does not take account of the numbers of people who know they are gay or bisexual but have not come out. But Stonewall said it nonetheless revealed a pattern of people having the confidence to come out earlier.

Among the 33 respondents aged over 60 only five had come out under the age of 18. Several had only done so in the last 10 years.

Dalia Fleming, 21, who came out when she was 15, said that accessible role models made coming out easier for young people, although there were still not enough.

Changes including the introduction of civil partnerships and the end of Section 28 – which banned the "promotion" of homosexuality in schools – had also helped, she said.

Go, read these articles in full.

The desire – however unrealistic in today’s hockey world – of Quebec one day reliving the glories of Lafleur and Béliveau and Richard were given a boost in recent months as the NHL showed a new willingness to entertain thoughts of re-establishing a team in Quebec City.

And it rose in an unexpected matter last week when Hockey Quebec was given the green light to put together its own team to compete in next summer’s Quebec Cup. Team Quebec will have status equal to the teams from Italy, France and Switzerland that had been invited to play in the proposed competition.

The plan – despite the various hurdles to be overcome – has been greeted enthusiastically in the province, particularly by sovereigntists who regarded the late, lamented Quebec Nordiques with their Fleur-de-Lys colours as a political force as much as a hockey team.

But it is also being embraced by players, such as Philadelphia’s Brière, a native of Gatineau.

“It’s great for French-Canadians and for the people of Quebec,” he says. “It’s also a chance for players to play in those tournaments – I have, and the experience is great.

In its recent two-week run on 130 Canadian screens, Score: The Hockey Musical earned just $250,000 – a figure that crushed McGowan and his distributor Mongrel Media’s Hussain Amarshi, who are still trying to figure out what went so drastically wrong.

“My sense is that people who are into hockey did not find the idea of a hockey musical appealing to them,” says Amarshi, who spent $1-million marketing the $5-million film. “And people who like musicals did not want hockey as a theme. ... Maybe it was ahead of its time.”

Amarshi is not the only person in Canada wondering why our filmmakers have yet to make a movie about our game – one that resonates with hockey-mad Canadians and scores as a bona-fide hit at the box office.

In the United States, filmmakers have managed to make commercially popular films about their most beloved games. In baseball, there is Bang the Drum Slowly and Bull Durham. Football has The Longest Yard and, more recently, the Oscar-winning The Blind Side.

Globe and Mail columnist and author Roy MacGregor has a theoryabout why Canadians haven’t crossed that threshold: “Hockey rinks aren’t pretty. There is nothing visually attractive around hockey games. They’re not as attractive as curling. Golf has a beautiful setting. Football has the panorama of the big stadium,” adds MacGregor, who wrote the acclaimed hockey novel The Last Season. “A rink is an enclosed space of cold air. It’s also a very fast game. It’s not an intellectual game, and it doesn’t lend itself greatly to the metaphors for life, which is what the baseball movies do.”

And yes, Roy MacGregor features prominently in both of those articles--quoted in the first, author of the second.
Collapse