Shot from the parking lot of the Canadian Air & Space Museum at Downsview, on a grey October day, the skyline of Toronto was still quite visible. 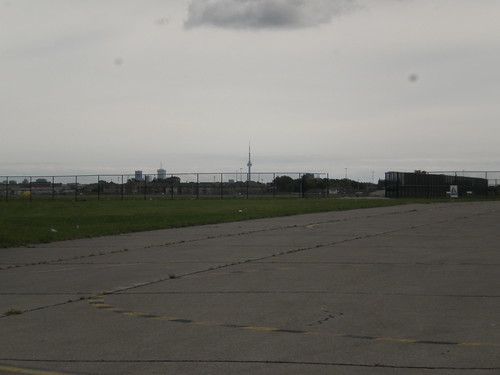 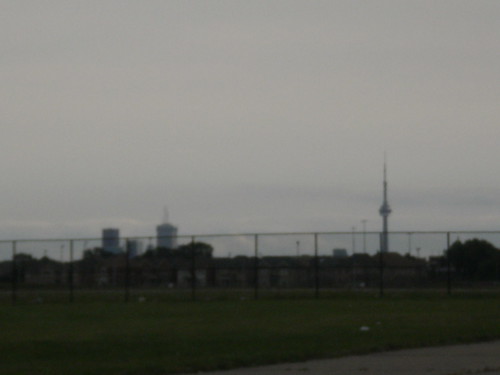 The Torontoist post I linked to earlier, featuring photos of strippers on the rooftop of the Zanzibar strip club downtown, had an interesting genesis.

Brian Cameron is a Digital Initiatives Librarian at Ryerson University, who works across the street and several storeys up from Zanzibar's rooftop at 359 Yonge Street. By email, he told us that for years it has been common knowledge among library staff that Zanzibar's dancers and servers routinely venture onto the strip club's rooftop. After moving offices a year ago, Cameron glanced out his window to discover his new work station afforded him a (slightly obstructed) view overlooking O’Keefe Lane and the rear of the strip club. Cameron, who is also a talented photographer, is continuously on the lookout for unique cityscape scenes; staff of the Zanzibar in repose fits this genre nicely. Over the course of a few months, Cameron photographed employees soaking up rays, catching up with co-workers, making calls, having a smoke, or just enjoying a break.

It turns out to have been morally quite sketchy.

Women working at the Zanzibar Tavern, a strip club in Toronto, believed no one could see them when they popped out for a cigarette or cellphone call while still in their work attire.

But a Ryerson University librarian, Brian Cameron, took photos of the women from his office window in August and September. They were published Wednesday on Torontoist, a local news blog that interviewed Cameron and did a story on the pictures.

The images were previously posted on Flickr, an online photography site.

The club's owner, Allen Cooper, says the women feel their privacy has been violated. Many dancers try to keep their occupation under wraps, something they won't be able to do because the photos show their faces, he said.

Norma-Jean Anderson, a bartender and waitress at Zanzibar, said two women quit over the photos and many left the club in tears Thursday morning.

One of the girls who was photographed is a Ryerson student, Anderson said.

"How is she going to feel the next time she has to go to the library or if she's going to class? I mean, everyone has seen these pictures and they've seen their faces."

Cameron "was stunned and embarrassed" by the article that ran in the Torontoist, he said in an email Thursday. The librarian said he was not paid for the photos, but would not comment further.

While Zanzibar's owner, Allen Cooper, mentioned to Torontoist that he didn't think the roof was visible from nearby buildings, several other employees we'd interviewed for the article said otherwise. ("Who complained?" one male employee asked, half-jokingly, when it came up.) In short, we never thought that the women who were being photographed thought, themselves, that the roof—with buildings like Ryerson's library overlooking it, and Yonge Street surrounding it—was private. But we don't know for sure: we made a mistake, and didn't speak directly to those women before featuring photos of them in which they could potentially, against their wishes, be identified. If we had spoken to them, and they had objected, this article would have been very different, if it was written at all.

No word from Cameron.

Greg Bear, Eon
Originally uploaded by randyfmcdonald
I suppose that Greg Bear's 1985 novel Eon is, like its contemporary Rocheworld one of those science fiction novels that's better with its science than with its writing. Alma Hromic's 2002 review isn't entirely off.

Even in 1985, when the Cold War was still very much within living memory and the way of life it had dictated something familiar to every thinking reader out there, this book must have had a terribly anachronistic feel to it. The technology is there, the potential is there, but none of the characters seem to have evolved past the primal Cold Warrior types. The Americans come across as paranoid and greedy to keep all the treasures for themselves ("The Libraries were a purely American preserve... by order of the President," as though the American president could have the power of actually enforcing such an edict short of threatening to blow up the libraries if an impure and non-American foot ever crossed their threshold...), the Russians seem to be straight out of the worst parodies of early James Bond, the Chinese are kind of tapping in place trying to figure out what their role in all this is, and the rest of the nationalities up there seem to have been tossed in to season the polyglot nationalist salad. Eon, twenty years after its initial publication, suffers from this hindsight, to the extent that it sometimes gets so annoying and in-the-way that it's hard to concentrate on the storyline.

Then again, Arthur C. Clarke wrote novels with the same clichéd geopolitics (2010, anyone?) and arguably similar problems with believable characters and no one finds that particular cause to trash his works, do they?

Eon's fundamentally a work concerned with opening and closing possibilities. The opening comes when a vehicle bearing a suspicious resemblance to the asteroid Juno emerges in a burst of gamma rays at the edge of the Solar System and decelerates into Earth orbit. The explorers (NATO, Soviet, Chinese) who arrive discover not only a generation starship but--quickly hushed up--evidence that it was not only populated by humans, but that its inhabitants disappeared down a mysterious space-time corridor extending beyond, somehow. On the Earth, possibilities are starting to close down thanks to an intensifying Cold War, one that already broke out into a minor nuclear war, is getting worse as the different parties fear that the advanced technology of the generation starship could change everything. And in the meantime, the generation starship's descendents, living down the Way in their artificial city, are starting to be distracted from their trade and their wars with other factions in other places of their bizarre universe by events at home.

Early Greg Bear may not have been a convincing writer, but he was certainly good at depicting vast impressive things. His generation starship impresses; his depiction of an Earth on the verge of catastrophe scares; his depiction of the Way and its cities and its connections awes. And, at the novel's end he provides readers with another way to check whether or not they're in an alternate history. I can't go into the details of the plot in much detail since Eon is rather spoiler-heavy, but I can say that the novel is ultimately concerned with the characters' efforts to find some sort of home, perhaps particularly brilliant Los Angeleno physicist Patricia Vasquez to find her home again.

So. Read Eon for Bear's grand scheme. Don't read Eon looking for especially convincing characters or moving writing (although there is that one passage--no, no spoilers).

The Los Angeles Times' Greenspace blog featured an interview with Lawrence Smith, the man whose recent book The World in 2050 predicts that global warming will make countries bordering the Arctic Ocean--Greenland, the Nordic countries, Russia, the United States' Alaska, and, of course, Canada--powerhouses. Below are the passages concerned with Canada.

By 2050, who will be the winners and losers?
The definition of a winner and loser depends on your point of view. There will be a surprising rise of indigenous power; from a human rights perspective, the indigenous groups are huge winners.

There will be reduced ice cover in the Arctic, which will allow for easier access for shipping. But the interiors of the north will become less accessible. So, we’ll see a rising maritime economy –- with greater access by sea, but reduced access by land.

What’s happening with the aboriginal people through the high latitudes?
During the 18th, 19th, and early 20th centuries, these people were pushed out, but in recent years there’s a been a rise in aboriginal power. It started in 1971 in Alaska with the Alaska Native Claims Settlement Act.

This means that the northern people are now stakeholders. From a human rights perspective, it’s great. From an environmental perspective, once the agreements are in place, aboriginal people will be able to favor resource development. Though the aboriginal people deeply care about the land and want to minimize damage. This is happening in Canada. But it’s not echoed in most of Europe and in Russia it's bleak.

The perception Americans have of Arctic people is different from the way Arctic people view themselves. To them, they are changing like everyone else –- they want to move to town, they want the Internet. To us, the Arctic is a pristine part of the planet that we like to protect; we like to know it exists. In terms of hunting, to them, they have lived off of these animals for thousands of years. To them, oil and gas are bounty of the land.

I'd like to believe Smith's prediction of a more prosperous future for Canada, though as always politics and the questions of what resources will actually be made available and in what volumes will determine that. I don't understand his attitude towards indigenous peoples, his assumptions that global warming will empower them. If he's assuming mass migration north to the Arctic--to the territories where, very often, indigenous peoples have remained majority populations because their regions are so hostile--then indigenous peoples will become as minoritized and ultimately irrelevant as their counterparts in more fertile areas. If we end up having a half-million people in Nunavut of which perhaps a fifth are Inuit by 2050, what will remain of Inuit culture apart from folklore and peripherality? The same goes elsewhere, of course.

I've a post up at History and Futility wondering why, when people imagine futures, they so often pictures futures where golden eras are proceeded by terrible suffering. Why this seemingly perverse desire?

I've a post up at Demography Matters discussing suggestions to shift population in South Korea away from a vulnerable Seoul to points elsewhere, pointing to at best ambiguously successful efforts in France towards a decentralization from Paris and the high cost of deconstructing such a successful city. In the end, one can only hope that Seoul's as lucky as other cities in the Cold War era which faced annihilation in a half-hour's space.