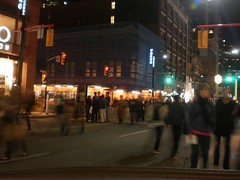 Standing out in a crowd
Originally uploaded by randyfmcdonald
The "candle" mode of my camera, something geared for low-light settings like Nuit Blanche, did a decent enough job of capturing the static streetscape and the blurred figures of passersby. Just on the left side of the photo, there's a group of five people captured clearly. I wonder what they were talking about.

I've a post up at Demography Matters that speculates on a possible if secondary reason for the North's hostility towards South Korea. North Korea's leadership is so concerned with ethnic purity that it's policy for its security guard to kick North Korean women pregnant by Chinese fathers into miscarriages; South Korea's government, in contrast, is actively encouraging the integration of immigrants and children born to foreign-born mothers into an increasingly cosmopolitan population. Might the North be unhappy with this?

Two of my co-bloggers have made posts to History and Futility today.