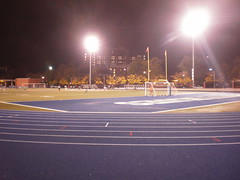 U of T Varsity Centre, Nuit Blanche
Originally uploaded by randyfmcdonald
Nuit Blanche night this year, there was a soccer game going on at the University of Toronto's Varsity Centre. The lights made it bright as day, with Robards Library being faintly visible beyond the lights.

Compare this picture of Varsity Centre under daylight.

In one of his last posts before Acts of Minor Treason transitions to a mostly photoblog, Andrew Barton has a post describing something important about worldbuilding: a scenario about the future needs to be plausible.

Originally dominated by farmland, ever since the 1950s its 4.8 square kilometers have been one of Metro Vancouver's industrial centers. I walked across it in order to reach the Alex Fraser Bridge, and I've been in few places quite so odd; on Sunday afternoons, it seems, Annacis Island is dead. There are few sidewalks, only a handful of businesses that aren't industrial, and I would be very surprised if anyone lived there. Obviously, I concluded, it would be a great place to put a thriving cityscape, eighty years hence! Annacis Island, a thriving place of adventure where anything can be had for the right price - boasting the largest concentration of parahumans in the Pacific Northwest! And I could develop it without having to worry about annoying reality.

Population? Hmm... something like sixty thousand seems reasonable with enough density, no?

It wasn't until later that I had an opportunity to do the math - and sure, with sufficient density, Annacis Island could theoretically support a population of sixty thousand - but with a population density of 12,500 per square kilometer, twice that of Hong Kong. In some places this would be believable - but even with the Lower Mainland penned in by mountains on one side, ocean on another, and the United States on still another, there's plenty of room to spread out here - and very little motivation to densify to such a degree without an extremely good reason to do so.

This sort of thing applies for all scenarios purporting to predict future events. If you're making a prediction about the future--Europe's going to become Muslim, say--then you have to do your homework to see if the current trends suggest that, and if there's any likelihood of these trends changing abruptly. (No they don't, and no there's much likelihood.) Thinking about triggers for change--like, say, the Annacis Island hyperdensification--is provocative, but you have to think of reasons why. (Extraterritorial alien enclave in the middle of Metro Vancouver, perhaps?)

This article by Anna Szulc, originally published in Poland's Przekrój and translated for Press Europ, took me by surprise. By quite a lot of surprise.

For the occasion, Frank Higgins, who is in his fifties, has donned the Royal Irish Regiment’s green uniform, complete with beret and pompom. He places the first chrysanthemum on the tomb of the First World War Polish Legionaires. "Piłsudski, do you remember who Piłsudski was?" [Marshal Józef Piłsudski, founder the independent Polish state in the aftermath of the First World War] Everyone answers in the affirmative, as though the question was about the Queen of England. Several of the younger members of the group are sporting conspicuous tattoos — among them Stuart, an electrician who was moved to tears by the tombs the Polish aviators on a visit to the Rakowicki Cemetery in Cracow.

Then there is Mark, who works for an aerospace company and is also a member of the Red Hand Commando, a Belfast paramilitary group which officially disarmed a year ago. In the course of a visit to Wawel Castle, an excursion to the Wieliczka salt mines and chats with Polish students in the pubs in Cracow, Mark has been thinking about how to help the 30,000 Polish immigrants in Northern Ireland to avoid the threat of serious trouble. It would not take much for the situation to spin out of control, especially since most of the Poles have chosen to live in the staunchly Protestant neighbourhoods of East Belfast, where, as Aleksandra Łojek-Magdziarz, of the Polish Association of Belfast explains, "the rents are lower than they are in the Catholic areas."

In the spring of 2009, after a football match between Northern Ireland and Poland, hooligans who had traveled to the game from Poland, and also from Wales and Scotland, went on the rampage in downtown Belfast. By way of reprisal, groups of Protestant paramilitaries destroyed 150 Polish homes. "Most of the victims were innocent Polish families," confirms Maciej Bator, director of the Polish Association of Northern Ireland. However, he also acknowledges that the Polish should accept some share of the blame for the conflict with the Protestant community. Most of the time, the trouble is caused by parties where the drinking gets out of hand.

When the Troubles — at least on paper — came to an end in Northern Ireland, he began to wonder about the possibility of sending Belfast paramilitaries to visit Auschwitz: as he explains, "so they could see the consequences of racism in its purest form for themselves."

The project began to take shape when Polish migrants started to arrive in Ulster. "I immediately realised that they could potentially fall victim to racism in Northern Ireland," explains Frank. And he was not wrong. Says Darius from Poland, a former supermarket employee who now works as a security guard, "I was to blame for all the troubles of the world, and especially for the fact that Polish Catholics were taking jobs and homes from Ulster Protestants. I even heard people say that we were responsible for the economic downturn in Northern Ireland."

So it was for people like Mark (who believed that people in Poland were dying of hunger) and Darius (who until a few years ago had never thought that there might be any difference between his Belfast neighbours and the people in Dublin) that Frank Higgins created the Thin Edge of the Wedge programme. Before long, he had obtained support from the European Union, which provided funding, as well as the Polish Association of Northern Ireland, the academics of Jagiellonian University in Cracow, the Cracow Dialogue Club, and a group of Polish MPs.

[A]s World AIDS Day on Wednesday approaches, [Arthur] Evans wants to be sure that a chapter in local history is not forgotten: that Haight-Ashbury, now the Hippy Incorporated tourist destination, is remembered as a once-thriving, influential gay enclave.

“I called the Haight ‘the outer Castro,’ ” he said.

Mr. Evans, 68, a mannered dapper intellectual, is among perhaps only a handful of gay men who have continuously lived in the Haight since the 1970s. Gay men and lesbians were first attracted to the neighborhood during the sexual revolution of the 1960s. Later, the area’s “lost gay heyday” peaked from about 1975 to 1985, according to historians.

“Everyone knows that the Castro was decimated” by AIDS, Mr. Evans said.

“The same actually happened to gay men in the Haight,” he continued. “The Castro mostly recovered its gay population. The Haight did not.”

From his apartment overlooking the intersection of Haight and Ashbury Streets, Mr. Evans has had a unique front-row seat to the neighborhood’s evolution. When he arrived in 1974 (paying $180 a month in rent), he said, it was a decrepit, drug-infested slum; a few years later, the neighborhood was populated by as many as a dozen gay clubs, where Sylvester and other disco stars performed at haunts like the I-Beam.

The Haight had its own shade of gay, distinct from the political and commercial Castro — more embracing of a counterculture of artists and free spirits. “Many of the gay people in the Haight saw themselves as part of a larger community of bohemians,” said Don Romesburg, assistant professor of women’s and gender studies at Sonoma State University. “Gays were part of a broader mosaic.”

Then, what Mr. Evans called the “great wave of death” appeared in the early 1980s.

Paul Boneberg, executive director of the GLBT Historical Society, said, “Half the gay men in San Francisco were infected in the first wave” of AIDS, “and most died.”

I'd like to imagine myself at least somewhat knowledgeable of queer history and queer San Francisco, but I never heard of that Haight-Ashbury affectation. Certainly a January 2009 travelogue from the same newspaper makes no mention of it. No one seems to have been left to publicize the queer past of Haight-Ashbury; at least, the few survivors don't seem to have been listened to, if they did speak.

HIV/AIDS is an epidemic that destroys neighbourhoods and communities so utterly that there may be little to no trace of them, only fragments from survivors. One reason the late Torontonian Rick Bébout's online Promiscuous Affections project--an online subjective history of Toronto's and Canada's queer community from the 1970s onwards--is such a valuable project is that it preserves much that would have been lost without Bébout and his effort to preserve things. Toronto's queer community fared lightly next to San Francisco's, mind, with infection rates--I recall--being less than half of those in that American city and a more tight-knit (since smaller) community, so much must have been preserved, but still ...

My various History and Futility posts on information should make it clear what I think about collective memory and archiving. I love them both. The idea that an epidemic disease cold annihilate a community so completely--and the knowledge of just how horribly the community's members were annihilated, killed by a disease that no one had any reason to expect--horrifies me. And Toronto and the Haight-Ashbury were just two communities so lobotomized. Consider it just another reason to be horrified by the full flush of AIDS in the pre-protease inhibitor era, and another to be appalled by what's going in communities around the world not so privileged as others.

I've a post up at History and Futility that builds on my World AIDS Day post to ask the question of how people, as interested observers, can reconstruct plausibly and responsibly communities that have been thoroughly destroyed, particularly without lived experiences recorded. Can it be done?