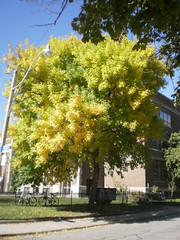 Square tree
Originally uploaded by randyfmcdonald
There was something so improbable about the form of this tree that I just had to take a picture of it. (What species is it, anyone?

Paul Gilster at Centauri Dreams is one among many commenting on the discovery that there are actually far more red dwarf stars in one of the more common galaxy types than astronomers believed.

The story comes out of Yale University, whose Pieter van Dokkum led the research using telescopes at the Keck Observatory in Hawaii. We’ve long known that because of their faintness and small size, getting a handle on the red dwarf population was problematic. Usually, I’ve seen a figure around 75 percent cited for the Milky Way, meaning most stars in our galaxy are red dwarfs (the Sun, a G-class object, turns out to be representative of only about seven percent of main sequence stars, meaning we live around a star that is not typical). And because red dwarfs are so abundant, the consequences for astrobiology are obvious if we determine habitable planets can orbit them.

The Yale team has looked at red dwarfs not in our galaxy but in eight relatively nearby elliptical galaxies, located between 50 million and 300 million light years away. What they discovered is that there are about twenty times more red dwarfs in these elliptical galaxies than in the Milky Way. Says van Dokkum:

“No one knew how many of these stars there were. Different theoretical models predicted a wide range of possibilities, so this answers a longstanding question about just how abundant these stars are.”

Elliptical galaxies make up between ten and fifteen percent of the galaxies in the local universe, and the finding triples our best guess about the total number of stars in the universe, thereby increasing the number of planets we assume to be orbiting these stars. We’ve seen robust planetary systems around stars like Gliese 581 and can assume similar systems exist in the galaxies under observation. The red dwarfs recently discovered are typically more than ten billion years old, giving life plenty of time to gain a foothold. Indeed, van Dokkum talks about ‘possibly trillions of Earths orbiting these stars,’ a notion that gives still more punch to the Fermi paradox.

Where is everyone, Gilster wonders, if there are so many potential sites for habitable worlds and potential civilizations out there but no sign as to their existence?