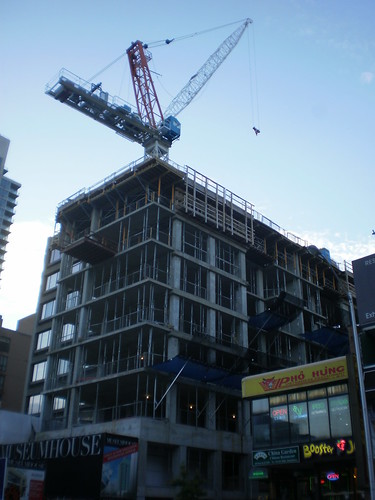 The Museum House condos look to be fairly high-end, partly of an increasingly condoized stretch of Bloor Street West. 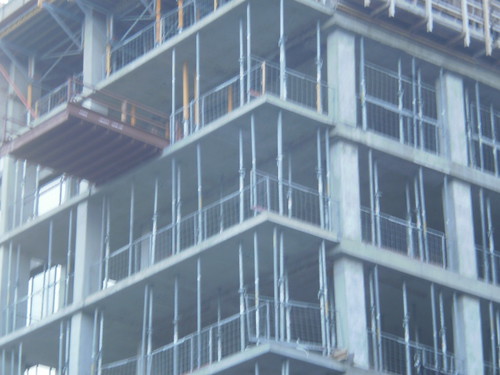 The below map, coming from this Toronto Star article, shows the overlap and lack thereof between the executive committees of Toronto City Council David Miller and current mayor Rob Ford. Miller's committee drew its membership substantially from the downtown, and was left-wing enough for one conservative to complain about the committee's ideological leanings. Same same, then.

Toronto, the insecure and terribly young metropolis of Canada, measures itself by other cities as it searches for an antidote to its insecurity, by other world cities. New York City--the arguable centre of its countrry's economy and popular culture and whatnot--is the usual metric, and as one would expect Toronto comes up short. Chicago, the other dynamic city in the Great Lakes basin, has made appearances of late in the print imagination, but again we call short.


Robert Adams, director of city design for Melbourne, Australia, arrived in Toronto this week for a talk hosted by the non-profit organization 8-80 Cities. His visit came at a somewhat inauspicious time: Mr. Adams delivered an address on the importance of pedestrian traffic and bike lanes on the same night that hockey commentator Don Cherry derided Toronto cyclists as “pinkos” at the inauguration of the city's new mayor, Rob Ford. To some, Mr. Adams's accomplishments are a daydream vision of what Toronto could some day become. Mr. Adams lobbied to make transit in hiscity free before 7 a.m., drastically changing the city's commuting dynamic, and cars were banned from Melbourne's busiest street. During his tenure, Melbourne has been transformed into the third most livable city in the world, according to the Economist. As a sign of his influence, his address at the Design Exchange this week was attended by two members of Mr. Ford's executive team, as well as an array of planners, city thinkers and transit officials. “It's so hard to arrive in a city and pass judgment, but I think you're heading in the right direction,” he said of Toronto. “At some stage you have to stop talking and start implementing.”

[T]these days, we may be wiser to direct our gaze back to our colonial mothership, London, England. It used to be that our fine city looked across the Atlantic for most things intellectual, cultural and political. (Street and neighbourhood names too: King, Queen, Bathurst, Islington.) These days, London gets more media play for its rapidly deteriorating social and spacing conditions than for its cultural supremacy. Add to that a population now swollen to over 8 million people and you wind up with a British tonne of problems to try and contain in a land mass only 40km wide from suburban edge to edge.

As it happens, Toronto is almost exactly the same size. And as we swear in our new suburban mayor, many of the very same issues plaguing London—transportation, congestion, immigration and the urban-suburban divide—have emerged, rather aggressively, as our most pressing concerns. In fact, one could argue that London and Toronto are on very similar paths—only a hundred years or so apart.

Consider the similarities. In the 1890s, there were about 5.5 million Londoners, which is close to the size of the GTA’s population today. Imperial London grew quickly during the mid-to-late Victorian era as people from all over the world migrated to the city to be at the centre of it all. Likewise, Toronto is growing today through its immigration boom, placing us at the centre of a global multicultural network.

These comparisons are fresh, at least, and even promise some insight. Go, read.

I've been thinking about how to respond to WikiLeaks here on this blog some time. I'll start by posting here tonight a list of the most interesting related links on the subject I can find, starting with the brief ones and then ging to two especially notable--and quotable!--essays which have been influencing my thinking of late.

Foreign Policy has a blog exclusively dedicated to WikiLeaks-related news. Start there.


Around the world, governments seem to be more interested in obeying the goals of industry lobbyists and the rich than in actually governing well; this isn't an accident, but the outcome of the capture of the machinery of governance by groups of individuals who are self-selecting for adherence to a narrow ideological outlook. In effect we are beset by accidental authoritarian conspiracies — not top-down conspiracies led by a white-cat-stroking Bond villain, but unintentional ad-hoc conspiracies by groups of individuals who work together to promote common interests. By coordinating, they can gain control of our institutions and impose an agenda that is agreeable to their interests (but not to the majority of the public). Familiar examples might include: the music and film industries and their catspaws among the lobbyists attending the WIPO intellectual property negotiations, the oil and coal industries, the religious right, and so on.

Assange has a model of how the abduction of governance by common interest groups — such as corporations and right wing political factions — works in the current age. His goal is to impair the ability of these groups to exert control over democratic institutions without the consent of the governed. By forcing these authoritarian institutions to apply ever-heavier burdens of secrecy to their internal communications, wikileaks aims to reduce their ability to coordinate and, thus, to exert control:

Authoritarian regimes give rise to forces which oppose them by pushing against the individual and collective will to freedom, truth and self realization. Plans which assist authoritarian rule, once discovered, induce resistance. Hence these plans are concealed by successful authoritarian powers. This is enough to define their behavior as conspiratorial.

Assange's analysis parallels Chomsky's — modulo having a somewhat different ideological outlook — but he's gone a significant step further, and is fighting back. His own explanation is here (warning: PDF).

Wikileaks is not attacking the US government; rather, it's acting to degrade the ability of pressure groups to manipulate the US government to their own ends. Those who benefit the most from their ability to manipulate the State Department are the most angry about this: autocratic middle eastern leaders, authoritarian right-wing politicians, royalty, corporate cartels. Those of us who are scratching our heads and going "huh?" about the significance of Muammar Ghadaffi's botox habit are missing the point: it's not about the content, but about the implication that the powerful can no longer count on their ability to lie to the public without being called on it.

For Assange in 2006, then, the public benefit of leaked information is not the first-order good of the Mark Zuckerbergs of the world (free information is its own reward), nor is it the second-order good of the muckrakers* (free information will lead the people to demand change). What Assange asks of leaked information is that it supply a third-order public good: he wants it to demonstrate that secrets cannot be securely held, and he wants it to do this so that the currency of all secrets will be debased. He wants governments-cum-conspiracies to be rendered paranoid by the leaks and therefore be left with little energy to pursue its externally focused aims. In his words, “We can marginalise a conspiracy’s ability to act by decreasing total conspiratorial power until it is no longer able to understand, and hence respond effectively to, its environment.”

The language of debased currencies and capitalist projects suggests an even more direct analogy to Assange’s third-order strategy. Imagine, for a moment, the whole apparatus of political secrecy redescribed in economic terms: let capital take the place of secrets, banks replace governments, and the free exchange of goods, services, and capital take the place of the normal back-and-forth of diplomatic information. Trust is the essential and vulnerable element in both systems, the critical counter to isolation and inefficiency in both diplomacy and finance. A loss of trust among diplomatic actors leads to the breakdown of backchannels and the hoarding of secrets. A loss of trust among economic actors leads to credit collapses, the paradox of thrift, and money under the mattress.

Push this redescription a step further, and you can see that what Wikileaks is trying to do to international diplomacy is not so different from what the mortgage crisis did to the economy. The cable-dump is the diplomatic equivalent of Goldman Sachs’s famous ABACUS CDO, the one it designed to go bust.

If this sounds like sabotage, well, that’s sort of the point. But it’s important to remember that unlike ABACUS, Assange’s attempted sabotage of the diplomatic economy of secrets was planned with the explicit aim of ushering in a new and better system. His 2006 essays paint him as the opposite of a nihilist, someone with a radical’s distrust of reform. Like those Marxists who hoped they saw in the financial crisis the first stirrings of a new and more just economic age, Assange looks to the diplomatic rubble he’s created for the promise of a new paradigm of government behavior.

That Wikileaks will have real-world effects is indisputable; they’ve already begun to show themselves. The real question, now, is whether those effects will look anything like what Assange hoped for them in 2006.

The financial analogy gives us reason to be skeptical. By rights the mortgage meltdown should have wiped out half of Wall Street. And yet two years after the worst of it, the banks that caused the crisis are enjoying record profits while the rest of the economy foots the bill: 10% unemployment, frozen federal pay, broke state governments, etc., etc., ad nauseam. The lesson of the crisis was unequivocal: power doesn’t have to play by rights. The State Department of the United States, we can be sure, is quite aware of this.

I've a post up at History and Futility where I argue that the main effect of WikiLeaks may well be to convince people that history is something they can, in fact, influence. Go, read.
Collapse