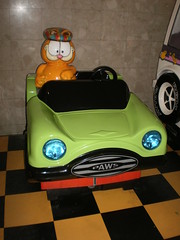 Garfield
Originally uploaded by randyfmcdonald
The sight of this children's ride in the Yonge Eglinton Centre complex in midtown Toronto keeps Garfield in my mind. Yes, the Jon Davis cartoon of the moody fat orange cat lacks the political edge of Doonesbury, say, but so what? All Garfield has to do is be funny, and he is still that after more than thirty years. (Garfield and Friends ranks alongside the Smurfs as my favourite cartoon show.) So: to Garfield!

Melky Sedeck is a group with a fairly simple backstory.

The younger siblings of the Fugees' Wyclef Jean, the sister-brother duo of Melky and Sedeck Jean were born in Brooklyn, the product of a Haitian-American family; their father was an ordained minister who led a congregation in New Jersey, and the children regularly performed gospel music at his church. While Melky later studied classical music, Sedeck attended law school, but played in a band on the side; both quit college in 1993, however, and two years later recorded their debut effort "I've Got a Love, " later featured on the soundtrack to the film Love Jones. The duo then signed a record deal, but when their new label folded they returned to the studio to work on a demo recording which ultimately landed them in the middle of an intense bidding war; finally signing with MCA, in 1999 Melky Sedeck issued their debut LP, Sister and Brother.

The group released a couple of singles afterwards before vanishing after 2001. Despite some positive fan reviews and professional reviews, and despite Wyclef Jean’s stature, nothing more came of them. The only song of theirs I had heard before was their 1998 single “Raw”; I only knew of that song after I encountered it during my brief career as a journalist at the UPEI student newspaper; and I only remembered that song by chance, for the first time in a decade, after I saw a physical single available for purchase on the racks of Sonic Boom Record Store down in the Annex this afternoon.

History and Futility co-blogger Jussi Jalonen has a post up that takes a look at the decidedly complex internal politics of Finland in the early 1980s vis-a-vis the Solidarity movement.

An important thing to remember is that while the emergence of the Solidarity movement in Poland generated widespread enthusiasm in Western Europe and Scandinavia, Finland was placed in a more difficult position. Although Finland was a member in good standing in the Nordic Council and an associated member in the EFTA, the foreign policy of the country was still guided by the necessity to maintain orderly relations with the USSR. The cornerstone of this foreign policy was the Treaty of Friendship, Cooperation and Mutual Assistance, signed between Finland and the USSR in 1948. During the subsequent presidencies of J. K. Paasikivi and Urho Kekkonen, the treaty had assumed quasi-canonical status in the bilateral relations between Helsinki and the Kremlin, and this status quo continued also during the presidency of Mauno Koivisto in the 1980s.

These “special relations” between the two neighboring states did not translate in direct Finnish subservience to the USSR. Indeed, president Kekkonen proved to be ready to resist the most unwelcome encroachments, as testified by the well-orchestrated expulsion of the Soviet ambassador Alexis Belyakov from Helsinki in 1971 and the regular refusals to the Soviet suggestions of military cooperation. Meanwhile, covert exchange of military intelligence was taking place between the Finnish Defence Forces and the United States. However, the official Finnish tendency to avoid all public actions which would be likely to antagonize the Soviets was regularly demonstrated in passive self-censorship as well as in the willingness of the aspiring politicians to intrigue with the resident Soviet officials. This tendency had arguably reached its peak in the 1970s, and had an effect also on the formal attitudes towards the Polish Solidarity movement in the early 1980s.

How did the Finlandization-era Finnish government react to the solidarity movement? How did conservative movements in Finland react? What effect did the whole episode have on Finnish politics and society in later decades?

Posters like this one have been appearing around Toronto, it seems. 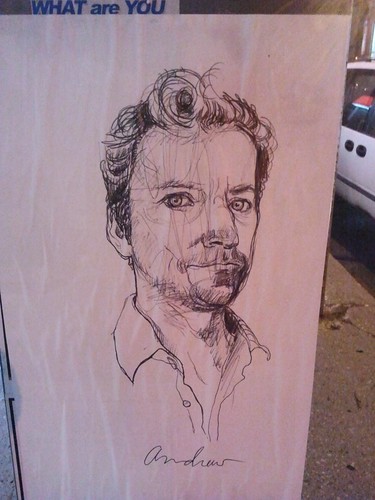 What are they about? blogTO's Derek Flack did some detective work and came up with a plausible suggestion.

Having heard a variety of ideas thrown about, I asked my go-to source for all things street-art related, Scott Snider. Although he had already seen and photographed one of the posters, he too was unsure of the exact story of their origin. But one of the comments on his Flickr stream (from Sally Hunter) did offer a theory that I've come to think is quite probable, particularly insofar as I've now heard it offered by more than one person.

The speculation is that the man depicted on the posters is Andrew Mackenzie Hull, a 46-year-old Oshawa-born filmmaker who died tragically in a cycling accident earlier this year. According to his obituary in the Globe and Mail, Hull was a long-time companion of Shaan Syed, a Toronto-born artist who now resides in London.

Among Syed's many works over the years, one series in particular prefigures the Andrew posters. Completed way back in 2001, the artist describes the the Jane Project as follows: "A small banal sketch of a friend, Jane, was taken from my sketchbook, blown up to life size, and hand-printed 1000 times as a poster that was plastered throughout the downtown core of Toronto."

The style of the Jane posters and the manner in which the subject's name is handwritten at the bottom of the portrait offer pretty compelling evidence to suggest the Andrew posters are the work of the same artist. And should this indeed be the case, these posters are in fact a mournful and chilling tribute to a lost loved one.

A commenter says that this theory is incorrect, but against the evidence provided--not only what Flack mentions, but the similarity between the man sketched and the photography included in the obituary--I'd say that Flack's hypothesis is likely to be the right one. Death be not proud.

It's fitting news that, just as Canada and the rest of the Northern Hemisphere has intensified its slide into winter, astronomers are learning more about the geologies of icy worlds in our solar system beyond our orbit.


Titan is the only body in the solar system other than Earth to have lakes, rivers, clouds, and a cycle of evaporation and mist or rainfall connecting them all. But on Titan, where temperatures hover around minus 300 degrees Fahrenheit, the flowing liquids are hydrocarbons like methane and ethane, not water.

The frigid moon is shrouded in a dense, hazy atmosphere of methane and other hydrocarbons. But astronomers think all the methane should have been broken apart by sunlight millions of years ago, suggesting that something on Titan is constantly pouring fresh methane into the atmosphere.

An icy volcano, also known as a cryovolcano, could be the methane pump scientists sought. But until now, the telltale peaks and flows indicating a volcanic eruption had been hidden.

New radar data from NASA’s Cassini spacecraft has helped astronomers build a 3-D topographical map of Sotra Facula. They saw three mountains lined up in a row. The most obvious one, which the scientists dubbed the Rose, is a single peak with a bite taken out of it and a crater 5,000 feet deep to its side. A second peak, shaped like a football stadium, lies nearby, and a third is to the north.

Measurements from Cassini’s spectrometer show evidence of some kind of magma flowing from the volcanoes to cover the surrounding planes, though what the magma is made of is still unclear. It could be a combination of water and ammonia, or it could be hydrocarbons similar to molten asphalt, candle wax or polyethylene, says planetary scientist Jeffrey Kargel of the University of Arizona, who was not involved in the new work.

“Volcanoes on Earth are destroyers of life,” he said. “But on Titan, cryovolcanism could represent perhaps the very liquids that would form the habitat for life, and very conveniently for us, the means by which these very speculative life forms are brought to the surface and made accessible.”

Despite its extreme cold, [Pluto] still appears to be warm enough to "easily" have a subsurface ocean, according to a new model of the rate at which radioactive heat might still warm Pluto's core.

And that ocean wouldn't be a mere puddle, noted planetary scientist Guillaume Robuchon of the University of California, Santa Cruz.

Rather, the ocean could be 100 to 170 kilometers thick beneath a 200-kilometer layer of ice, Robuchon said at an annual meeting of the American Geophysical Union in San Francisco earlier this week.

If so, Pluto would join a list of outer solar system bodies—such as Saturn's moons Titan and Enceladus—believed to possibly hold liquid water, a key ingredient for life as we know it.

Pluto's heat would come from the decay of radioactive nuclides, particularly potassium-40, in rocks deep in the dwarf planet's interior.

Even though Pluto's surface is probably colder than -230°C, there could still be plenty of liquid-preserving heat beneath the ice cap, the new model suggests.