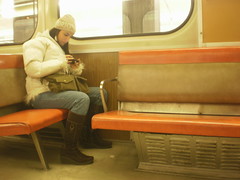 Inside a H-series
Originally uploaded by randyfmcdonald
This is a shot inside one of the older H-series Toronto subway cars I've seen on the Bloor-Danforth line lately, one of the H series that's most notable to me for its 70ish colour scheme, orange and chrome and yellow

I and you owe Doug Saunders' article "Imagine a World Without Privacy" thanks for the existence of this [FORUM] question.

The Zuckerberg view of the end of personal privacy happens to be strikingly similar in philosophy and in effect to the Julian Assange view of the end of government privacy. In fact, the strange Swedish case involving Mr. Assange’s sex life seems to bring the two together. They have both acknowledged this, with Mr. Zuckerberg saying this week that “at a very high level some of the themes could be connected.”

Both WikiLeaks and Facebook recognize that the individual leaks or postings aren’t important – it doesn’t matter whether profound secrets or ordinary banalities are revealed. Rather, it’s the change in human behaviour produced by the possibility of exposure.

Mr. Assange, in his essays and manifestos, argues that the very existence of a ubiquitous leak-inducing mechanism may cause governments to act accountably. He also hopes they will topple, but there he is misunderstanding his own philosophy. In truth, he is much closer to Mr. Zuckerberg. They both want to create an all-encompassing sense that we are always seated in the living room, with someone peering over his newspaper from the opposite couch.

I had not recognized the full implication of this until I read a great article in The Times of London written by comedian Frank Skinner, who found himself marvelling in morbid curiosity at the Cablegate revelations while learning, through Twitter, that a number of complete strangers had seen him in another comic’s audience and tweeted that he hadn’t laughed. He saw that he and the State Department had become part of the same phenomenon, and recognized its historical origins.

“People used to behave well because they thought God was watching,” he wrote. “Now, the secular world has come up with its own hidden observers. I wasn’t happy that Twitter caught me not laughing or that CCTV caught me breaking the law, but I took a breath, set my jaw and nodded respectfully to the truth – thus acknowledging the time-honoured concept of the fair cop.”

The death of God ended the sense of being watched. Sociologists such as Robert Putnam, in his classic book Bowling Alone, noted that Westerners had lost bonds of kin and community, their TV-and-telephone world stripping them of ethical duties.

But suddenly, in a Benthamite apotheosis, we have a new god, watching us and preparing to judge us at any moment, keeping us on the straight and narrow. And we are that god. Like the laughing spectators in the observation tower, we all serve as prison guard and spectator, prisoner and warden, all at once.

The human flesh search engine is a phenomenon that's going to keep chewing up miscreants for the rest of our civilization's history, I fear, and I'm pretty sure that if not just governments, other institutions, and prominent people but everyone is going to live under surveillance, any manner of interesting psychological issues will manifest. Then again, maybe the sense of being constantly on display to everyone won't necessarily be traumatic. Maybe watched individuals will actually be better people. (Certainly the furor over Assange's charges is making people aware of what rape can actually be.)

What say you all?
Collapse