Michael Snow's 1979 sculpture Flight Stop, a flock of Canada geese suspended in the Eaton Centre off of the mall's Queen Street West entrance, is one of the most whimsical elements of the Eaton Centre: in this public space, this enclosed main street, some sort of natur has a presence. 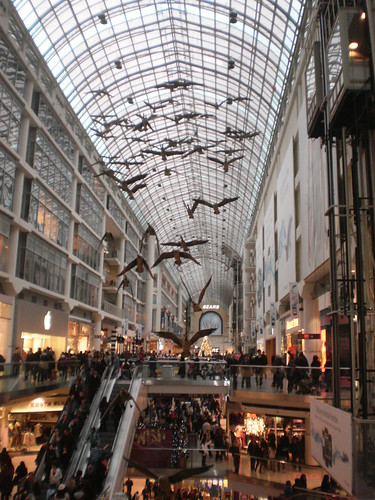 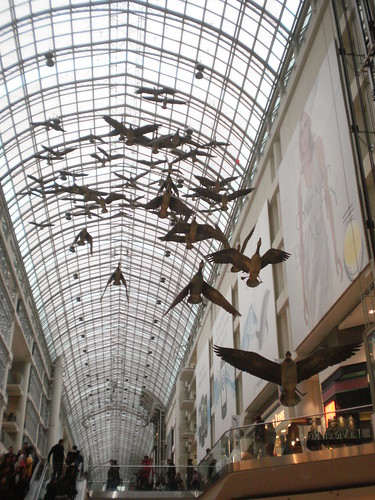 As it turns out, Christmas was the occasion for an important court case--Snow v. The Eaton Centre--dealing with the rights of Canadian artists to control their works.

During the Christmas season of 1981 the Eaton Centre placed red ribbons around the necks of the geese. Snow brought an action against the Centre to get an injunction to have the ribbons removed. He had argued that the ribbons offended the integrity of, and distorted, his work.

The judge agreed with Snow. He held that the sculpture's integrity was "distorted, mutilated or otherwise modified" which was "to the prejudice of the honour or reputation of the author" contrary to section 28.2 of the Copyright Act. The opinion was based both on the opinion of Snow as well as the testimony of experts in the art community.

Subsequent to this case, the standard for moral rights infringement has been raised by the requirement for more objective evidence of prejudice and harm. Evidence from other respected artists and people knowledgeable in the field is required to prove prejudice to honour or reputation (see Prise de Parole Inc. v. Guerin [1995] F.C.J. No. 1583)

Also since this case, the Copyright Act has been amended so that any modification to a painting, sculpture or engraving is deemed to prejudice the author (section 28.2(2)). For those types of works, no evidence of actual prejudice is required.

I found this Wall Street Journal post via a passing mention in an article describing Facebook founder Mark Zuckerberg's visit to China and search engine Baidu.

Fang Binxing, known as the “father of China’s Great Firewall,” recently created a user account on one of China’s most vibrant online public forums, microblogging service Sina Weibo, but Chinese Internet users hardly greeted the Beijing University of Posts and Telecommunications president with a welcome mat.

Instead, they flooded his account with a stream of often vicious comments and curses that effectively chased him off the service.

Users said Mr. Fang’s earliest posts dated back to a few days ago, but that few people noticed his microblog until he wrote a message to famous CCTV anchor Jing Yidan (“Hi, I’m on Weibo now, although I don’t dare be as outspoken as you all, haha”) on Monday morning. After that, the comments, most reflecting the displeasure of many over the limitations on their use of the Internet, began piling up.

The Chinese government regulates Internet use in a number of ways. Internet companies in China, including Sina, need licenses to operate, and are required to police themselves, filtering out any illegal content, which ranges from pornographic to politically sensitive material. Websites based elsewhere may be blocked in their entirety or users can be periodically locked out if they continuously surf onto Web sites that contain certain key words.

The technology used to accomplish this—said by official media to have been built with substantial input from Mr. Fang–is often referred to as the Great Firewall, or GFW. In recent years an increasing number of Chinese Internet users are learning about its existence and–to a lesser extent–about how to circumvent it. Meanwhile, services like microblogging are speeding up the flow of information, making it more difficult to control.

Some commenters appeared to hope that their harsh reactions would limit Mr. Fang’s ability to use Sina Weibo the way the GFW limits Internet access within China. “Fang Binxing, GFW has deprived people’s rights to freely access the Internet, and now people want to deprive you of the right to use micro-blogging,” one user wrote. “But if you are not happy with it, go ahead and list t.sina.com.cn on your blacklist.”

Is all this China's human flesh search engine at work, looking for Internet malefactors to punish?

I've a brief post up at History and Futility that reflects on the recent to-do regarding the closure of the Delicious bookmarking system and its implications on the construction of coherent indices for the Internet. It's going to remain sloppy, isn't it?

I've a post up at Demography Matters that takes a look at how, despite generally progressive political and social policies, Toronto's immigrant population isn't being assimilated into the city's labour market for any number of worrisome reasons, something with worrisome consequences. Does anyone have solution as to how this very economically and morally problematic situation could be reversed?

Alex Harrowell's mockery, at A Fistful of Euros, of the new generation of Islamist terrorists and the people who warn they're a front is not only funny, but makes a valuable point.

Consider the last few Al-Qa’ida incidents. All of them have been, objectively, pathetic. The common denominator has been failure mixed with futility. Terrorists who regularly and publicly fail to kill people or destroy artefacts are simply not terrifying. But the official narrative has been that this represents a “new form of terrorism”. For example:</p>

Abdaly’s bombs may represent a new type of jihadist attack in the west. In terms of sophistication, it is at the opposite end of the scale from 9/11. But al-Qaida has failed to land a serious blow on western soil since the 2005 London bombings. Experts say they may be trying a new tack: calling on supporters to attack westerners at will, with whatever tools are at hand.</p>

If this is a new form of terrorism, it’s nothing but good news, as it strongly suggests that the highly competent and ruthless agents of international Al-Qa’ida are a thing of the past, replaced by a new kind of terrorist I propose to call the DICKHEADS, for Desperate, Incompetent, Converts, Kids, Harmless, Economically insignificant, imless, Disconnected, and Suicidal.