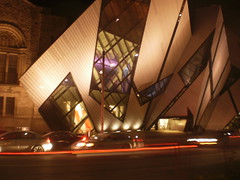 ROM Crystal at night
Originally uploaded by randyfmcdonald
This long-exposure shot of the Royal Ontario Museum Crystal speaks to me. I can't say that it's technically brilliant, but it has a certain energy, I think.

Ours is an age of miracles and wonders, people.

About 27 percent of all gene families that exist today were born between 3.3 billion and 2.8 billion years ago, two researchers from MIT report online December 19 in Nature. The surge of gene births — which the scientists have dubbed the Archean expansion — predate some important changes in Earth’s early chemistry, including the appearance of large amounts of oxygen in the atmosphere, say evolutionary biologists Eric Alm and Lawrence David.

The study may show how early organisms responded to and helped alter the planet’s chemistry. Daniel Segrè, a computational biologist at Boston University, says that the work provides “insight into really ancient metabolic events.”

To read that history, the researchers traced the evolution of 3,983 gene families in the genomes of 100 different living species. Gene families are groups of genes that share similar structures and functions. Analyzing that amount of data is a technical tour de force, says Jason Raymond of Arizona State University in Tempe. Most researchers painstakingly reconstruct the evolutionary history of one gene at a time, he says. By simultaneously examining how thousands of genes changed over time to produce the variation seen in organisms today, “they’ve leapfrogged other researchers,” he says. “If they’d have done this 10 years ago, I’d be out of a Ph.D.”

Genes for shuttling electrons burst onto the scene about 3.3 billion years ago, the researchers calculate. Those genes, known as electron transport genes, are important for such processes as photosynthesis and respiration. By increasing the energy efficiency of some early life forms, these genes may have enabled populations to thrive.

Genes for using oxygen appeared at the tail of the genetic expansion around 2.8 billion years ago, long before oxygen began accumulating in the atmosphere around 2.5 billion years ago. The team also found evidence for the birth of genes for processing nitrogen and for using iron, molybdenum, copper and other elements.

While the genetic predictions match geochemical data for many of the elements, a few appear to contradict ideas about Earth’s early history. For instance, the new data predict that genes for using nickel were increasing at a time when geochemists say nickel concentrations in the ocean were crashing.

What James Bow says, more or less. I'm not for proportional representation inasmuch as the plans put forward strike me as undemocratic, but the theme of disenchantment is certainly present here in Camada.

So, I’m a little confused why so much rhetoric has been spent by the various parties trying to get partisan voters to switch sides. Why are we so concerned about how many Liberals could vote Conservative and vice versa, or how many New Democrats could be enticed to the Liberal fold? Why is no party leader or policy maker going out and talking to the 9.5 million Canadians to ask them why they don’t vote? Why isn’t there any work being done to craft a policy or platform that can entice some of those eligible voters back to the voting booth (assuming the various parties could get past the credibility gap to catch the attention of these non-voting voters, many of whom are likely deeply cynical about such promises).

Consider the numbers, if just 10% of those 9.5 million voters found enough that they liked in a particular party’s platform — enough to take a leap of faith and return to the democratic process — that would represent 950,000 votes, the equivalent of the Green Party’s support in the last election, or almost 7% of the electorate. 950,000 votes would significantly close the gap between the Liberals and the Conservatives, or between the New Democrats and the Liberals — and that’s assuming each party keeps those voters who voted for them in 2008. With Conservative party support down from its 2008 numbers, an additional million voters heading to the Liberals could be enough to change a government.

Of course, the big question is what it policies it would take to convince some of those 9.5 million electors to come back to the voting booth, not to mention convincing them that the policy promises were being made seriously and would be kept once the ballots were counted. I can’t help but suspect that since many have walked away from the democratic process because they feel their votes do not count anymore, the policy that could get them back would have to be democratic reform — either proportional representation, or even something simpler, like having a “none of the above” option placed on the ballots.

The 9.5 million voters who have chosen not to vote represent a rot in the Canadian democratic process. They represent a disconnect. The way the system is designed allows the mainstream parties to govern without regard to what would be a majority mandate if those 9.5 million came off the fence and voted en masse for their own party, but it’s a phantom mandate. Over 40% of voting Canadians gave no consent for this government to govern, and yet the government governs regardless. How is that democracy? How is that right?

Posted without comment. Suffice it to say that, after the G20 and the police malfeasances there, I'm starting to have as little faith in the Toronto Police Service as British Columbians might feel for the RCMP after the Dziekanski affair revealed massive--well, something like lying and arrogance vis-a-vis non-police, at least. Did I mention that the Toronto policemans' union refused to help identify anyone? Twelve of thirteen possible police witnesses, curiously, couldn't help the Special Investigative Unit's investigators.

Const. Babak Andalib-Goortani was charged Tuesday with assault with a weapon. The charges relate to the treatment of Adam Nobody by police on the evening of June 26, said a statement released Tuesday by the province's Special Investigations Unit.

Nobody was one of about 1,000 people arrested during the two-day summit.

During his arrest at Queen's Park, Nobody suffered a fracture below his right eye and a broken nose.

Nobody pursued two charges of police brutality against the arresting officers, but in November the SIU said although it believed excessive force had been used, it could not identify the suspect officers.

In its initial investigation, the SIU used a YouTube video that showed Nobody's arrest, but investigators said the video didn't show the officers clearly enough to identify them.

The video shows Nobody being swarmed and at least one officer making a punching motion toward him.

Police forensically examined the tape and found it had been "tampered" with, Blair said.

"The evidence that they're relying on is false. It's been edited. A significant portion of it has been removed," he said on CBC's Metro Morning.

Blair's allegations prompted John Bridge, the Toronto man who had shot the video, to come forward and swear in an affidavit that the video had not been tampered with — only that he had turned his camera off for a few seconds because he thought he might have to retreat from advancing police.

Blair apologized a few days later and retracted his statements saying there was no evidence there was ever any "intent to mislead."

The SIU reopened its investigation and soon announced it had received two more videos of Nobody's arrest and Toronto police had provided investigators with the names of 15 officers who might have been in the vicinity or involved in the arrest.

The SIU singled out three of those officers, but they refused to give statements. The other 12 officers said they could not identify the officers in the video.

Toronto police then provided the name of one more witness police officer, who identified one of the three officers as Andalib-Goortani, according to the SIU.