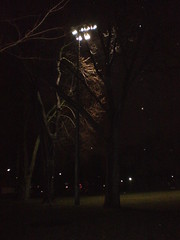 Looking through my Google Reader account, any number of blogs--The Loom and GNXP and even Marginal Revolution--carried news of the confirmed existence of the Denisova hominin, a human population equally distinct from the main body of homo sapiens sapiens and from the Neanderthals that appears to have descendants in Melanesia, of all places. Wired Science's Brian Switek summarizes.

The fossil scrap — just the tip of a juvenile female’s finger — was discovered in 2008 during excavations of Denisova cave in Siberia’s Altai Mountains. Anatomically it looks like it could have belonged to a Neanderthal or a modern human. But, in an initial announcement published in April in Nature, a team of scientists led by geneticist Svante Pääbo of the Max Planck Institute for Evolutionary Anthropology concluded the bone belonged to a distinct population of humans that last shared a common ancestor with Neanderthals and our species about one million years ago.

The new study, published by Pääbo and colleagues Dec. 22 in Nature, provides further evidence that Denisova cave was home to unique humans. The researchers analyzed genetic sequences recovered from the nuclei of cells, which offer better resolution of relationships than the mitochondrial samples used in the previous research. The Denisova DNA sequences were closest to the Neanderthals, indicating they shared a more recent common ancestor with Neanderthals than with us.

The new genetic data suggests the ancestors of the Neanderthals and Denisovans left Africa between 300,000 to 400,000 years ago and rapidly diverged. But this estimate is based on models of the rates that genes typically mutate and could be off the mark.

“The Neanderthal and Denisova population history may be roughly twice the length suggested in [the Nature] paper,” said University of Wisconsin — Madison anthropologist John Hawks, who was not involved with this study. “The ancestors [of the Denisovans] might be the original “Homo erectus” dispersal from Africa.”

The big question, however, is whether the Denisovans are a new species of human. They were genetically distinct from other humans, and an upper molar tooth (above) found at the same excavation hints that these people were similar to earlier species like Homo erectus. But this is not enough to declare a new species, especially since the same team of researchers recently found that Neanderthals likely interbred with populations of our species that moved outside Africa. Between 1 and 4 percent of the genes of non-Africans match those found in Neanderthals making it difficult to draw the species line.

An unexpected discovery about the Denisovans further complicates the picture: Some modern-day people carry Denisovan genes. Through genetic comparisons Pääbo’s team found that some people from Melanesia – an assemblage of islands off Australia’s east coast including New Guinea – share 4 to 6 percent of their genomes with the Denisovans. This probably indicates that the Denisovans interbred with anatomically modern humans despite the split between our lineages over a million years ago.

In a post at his weblog, John Hawks stated that the Melanesian end isn't a complete surprise. "There were pretty clear hints that something interesting may have been going on with the population structure in the ancestry of living people in Papua New Guinea. My graduate student, Aaron Sams, has been looking into the hypothesis of a deeper Pleistocene component of ancestry in this population for the last few months. Of course we had earlier this year the announcement from Keith Hunley and Jeff Long's group that microsatellite variation was consistent with an ancient Pleistocene structure to the ancestry of Melanesians. [. . .] It is perhaps a bit of a surprise that an ancient genome from southern Siberia would provide so many genealogical ties to this island population. That will require us to give some close consideration to the population structure of Pleistocene people as well as the migration history leading to the peopling of Oceania." The Denisova hominins might be homo erectus, Hawks says, but there are some issues with timing which makes this identification difficult. What populations were around in Asia at that time?

This Dan Gardner article on the problems of the left in the Anglophone North Atlantic, the inability of people on the left generally to effectively capitalize on the financial crisis.

In the United Kingdom, an austerity budget introduced by the governing coalition of Conservatives and Liberal Democrats has done little to help Labour, which continues to muddle along in the polls. In Germany, Angela Merkel and her Christian Democrats are unpopular, but the left has fractured and the Social Democratic Party is weaker than ever.

In the United States, the Republicans are intellectually bankrupt but the Democrats still managed to lose the House of Representatives last month and a Democratic president was compelled this week to accept tax cuts for millionaires — casting the American left into the sort of despair it felt during the Bush years.

Gardner interivews the New Democratic Party's Jack Layton, who puts forward a collection of proposed policy changes that, yes, are quite worthy and, yes, are interesting, but are too small, are micro-movements, nothing adding up to an ideology more convincing than that of a government enabling good choices on the parts of its citizenry.

The problem is the same one that has plagued the left for 30 years: Nationalization and wealth redistribution vanished from the intellectual climate, leaving free-market thinking to dominate the unspoken assumptions which are the foundation of political debates. There was a time when a leftist who embraced those assumptions could still seem fresh and different, but that was before Bill Clinton sold his soul, Tony Blair invaded Iraq and “third way” became a punchline.

British historian David Kynaston noted that even if Winston Churchill’s Conservatives had won the election of 1945, “they almost certainly would have created a welfare state not unrecognizably different from the one that Labour actually did create.” That was the intellectual paradigm of the day. There was no escaping it.

The free-market paradigm was rattled in 2008, but it still stands. If the left steps outside the paradigm, it makes itself unelectable.

If it stays within, it has nothing more exciting to offer than minor variations on the status quo[.]

What paradigm can we come up with next?
Collapse