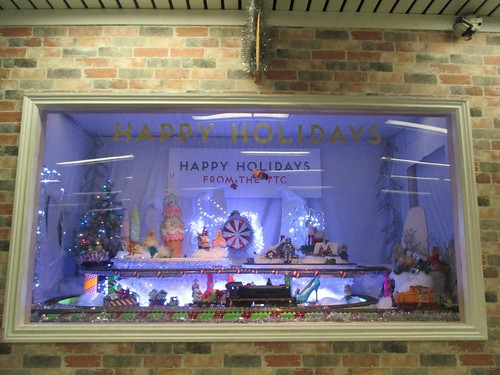 The Financial Post shares Chris Graham's article from The Telegraph suggesting Facebook's Mark Zuckerberg is trying to set up a political career for himself. Oh, why not?

Mark Zuckerberg has announced that he is to spend 2017 travelling to every U.S. state he has not yet visited, in a personal challenge that is fuelling speculation he plans to enter politics.

The Facebook CEO has set himself various challenges in recent years, such as learning to speak Mandarin. But, writing on Facebook, he said his new aim was to visit and meet people in every state. “I’ve spent significant time in many states already, so I’ll need to travel to about 30 states this year to complete this challenge,” he wrote.

“After a tumultuous last year, my hope for this challenge is to get out and talk to more people about how they’re living, working and thinking about the future.”

The tech mogul’s decision to sit out a high-profile meeting with President-elect Donald Trump and other Silicon Valley bosses in mid-December also fuelled speculation about a possible run for office.

When 13 tech bosses, among them some of the world’s richest entrepreneurs, were summoned for the meeting with Trump, Zuckerberg was conspicuously absent.

Instead, he sent his trusted deputy and chief operating officer, Sheryl Sandberg, making Facebook the only company at the meeting without its CEO in attendance.

Sarah Pulliam Bailey's article in the Washington Post, based on a visit to a North Carolina town made famous for its linkage with Andy Griffith and a sort of ur-America, was eye-opening. The actual intentional desire of the people interviewed to return to a white Christian America is incomprehensible to me. More: I wonder what this area's Canadian equivalents are.

From a perch on Main Street, the home town of actor Andy Griffith looks this day like it was plucked right out of the television show that bears his name. And it was.

Residents and tourists from far-flung states mill along the thoroughfare, past the quaint low-slung shops made of Mount Airy’s famous white granite and named, like Floyd’s City Barber Shop, for references in “The Andy Griffith Show,” the folksy comedy set in the idyllic fictional small town of Mayberry that first aired in 1960.

And yet even as this city of about 10,000 nestled in the Blue Ridge Mountains fills its coffers by selling nostalgia, many of its residents would agree with the now-popular saying “We’re not in Mayberry anymore.”

If only the real Mount Airy, which has experienced decades of economic and social decline, were like the Mayberry facade, muses Mayor David Rowe. If only his city and the rest of America could return to the 1950s again.

“Now it’s about secular progressivism, not the values you get out of this book,” like honesty and hard work, said Rowe, 72, jabbing his finger at the leather Bible on his office desk.

But as Donald Trump prepares to move into the White House, Rowe and many of his constituents are hoping for a return to the past.

“We’re going to hold him to it,” said Brad Thomas, 42, who used to work as an engineer building turbine blades for power plants before his job was moved to Mexico.

CBC News' Stephanie Vankampen reports on the end of a shuttle connecting Prince Edward Island to the mainland. One reason I left was the question of accessibility to the outside world: I wanted to be able to be mobile. The weakness of mass transit routes, including buses, in the Maritimes generally is a serious issue. That the underlying economics might well not support unsubsidized routes just makes the situation worse.

Since the Confederation Bridge opened in 1997, shuttle service has been offered to bring Islanders to Halifax.

Many passengers have taken the bus regularly for years, to travel to medical appointments, the Halifax airport, or to and from university in the city.

Driver Gary Meyers has been making the run — 13 hour days, 5 or 6 times a week — for the last 17 years. He knows every crack and bump on the road between Charlottetown and Halifax.

He said while the service will be missed by the regular customers, it was no longer profitable for the company to run both shuttle and bus service.