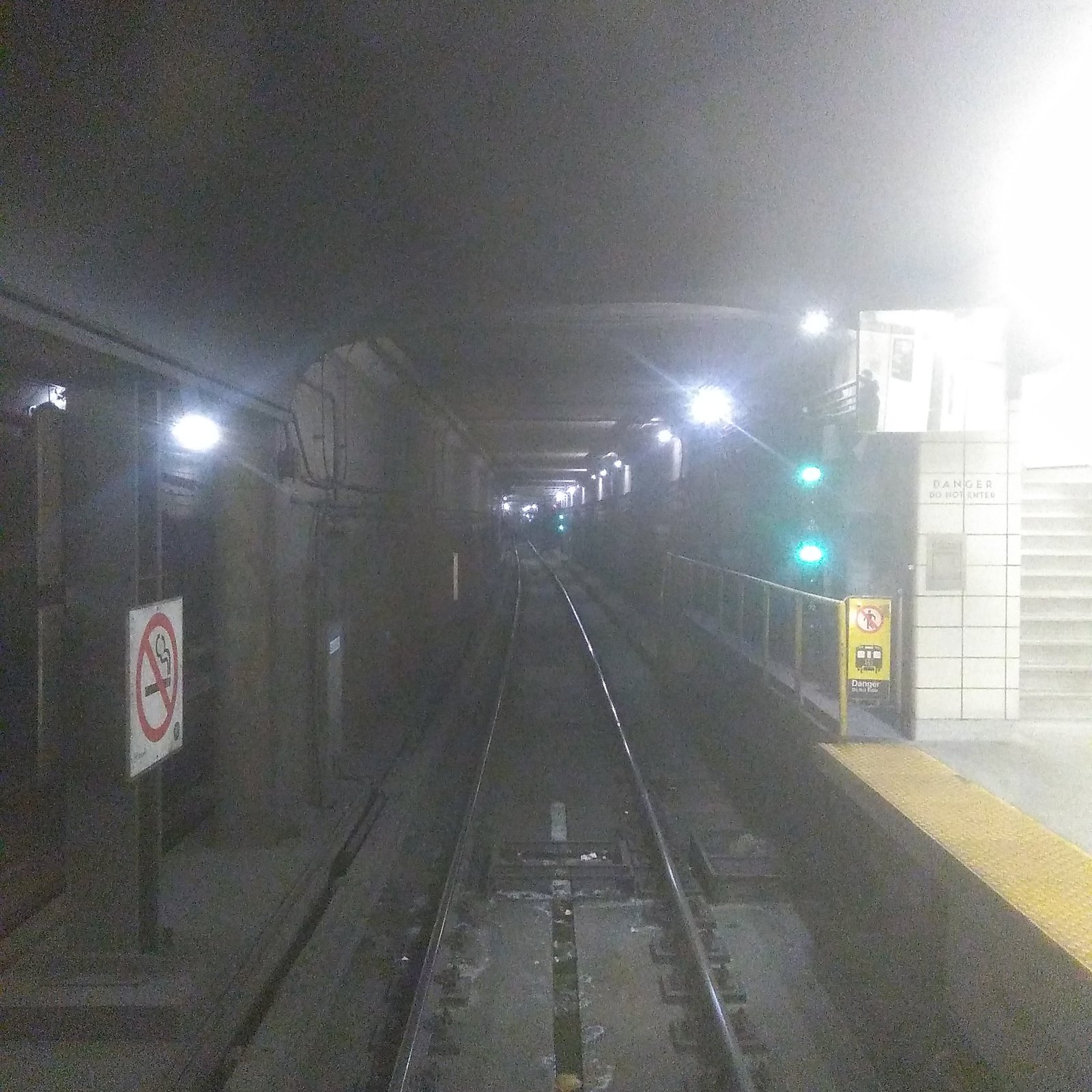 The Toronto Star's Ben Spurr writes about the claim by TTC chief Andy Byford that the TTC is set to become a top transit system in North America. This claim--also shared by blogTO--is not intrinsically implausible, although I have to say that much depends on Byford's frame of reference. Mass transit in North America is not mass transit in Europe, for instance.

Andy Byford is counting down the days until the end of 2017. That’s when he believes Toronto transit riders will be able to enjoy what he calls the “utopian journey of the future on the TTC.”

The upcoming year is a pivotal one for the TTC CEO and the organization he oversees. It’s the final chapter of the five-year plan that Byford launched to completely modernize an agency he says was “stuck in the 70s” when he took over in 2012.

He paints a rosypicture of the experience of riding the transit system once the plan is complete. He vows that by year’s end the Toronto-York Spadina subway extension, the first addition to the city’s subway network in over a decade, will be open.

Customers will be able to access each of its six “stunning” stations with the tap of a Presto fare card, and inside they will be greeted by a roving TTC employee — no longer confined to a collection booth — who will offer directions and schedule information at the touch of a tablet computer.

Taking the fully accessible station’s elevator down to the platform, customers will be able to browse the internet on a wifi network that extends across the subway system, as they wait for a train that will be faster and more efficient thanks to the implementation of the automatic train control (ATC) system on a portion of Line 1.

“That ladies and gentleman, that sounds like utopia,” Byford said during the TTC’s annual customer town hall in November.

blogTO's Derek Flack places Mirvish Village, with the end of Honest Ed's set to come to an end itself, in the context of Toronto's other now-vanished neighbourhoods.

Toronto's most famous lost neighbourhood is probably The Ward, a densely packed and diverse area that bounded by Yonge, University, Queen, and College streets. At various points, it was home to numerous immigrant enclaves, including an early Little Italy and the city's first major Chinatown.

The Ward was notorious for its poor living conditions, as many lived crammed into shacks with little ability to maintain warmth over the cold winter months. Some of its areas were, by all rights, a slum, but it was a crucial starting point for many who arrived in the city, and remains an important part of Toronto's history as a diverse city.

A huge portion of the neighbourhood was razed for the construction of the New City Hall and Nathan Phillips Square in the early 1960s. This had a ripple effect on the entire area, which the city had been gradually redeveloping since the 1920s. Chinatown and Little Italy moved west and by the 1970s, very little of the old neighbourhood remained.

errard Village is another of Toronto's lost neighbourhoods. Located within the broad borders of The Ward, it had boasted an identity quite distinct from the area to the south. This was Toronto's Greenwich Village, a hub of bohemian activity through the 1950s and early 1960s.

Populated by intellectuals and artists, the area surrounding Gerrard and Bay streets featured coffee and books shops, live music venues, and cheap restaurants. It was just a tiny stretch of the city, much like Mirvish Village, but people like Pierre Berton considered it an "intriguing island in the heart of downtown Toronto."

blogTO's Amy Grief describes how the institution of the community land trust, organized by neighbourhood organizations to buy up available land in different places with the goal of ensuring it will be used for affordable housing and the like, is starting to appear in Toronto.

[O]rganizations in both Parkdale and Kensington Market are trying to use the community land trust model in order to fight neighbourhood gentrification and rent increases (in both commercial and residential properties).

Like other community land trusts - located in the United States and other parts of Canada, including in Hamilton - the ones in Parkdale and Kensington Market seek to own land and then lease it like-minded organizations who can help secure affordable housing and green space.

"We want to own real parcels of land, own the deed to them and we want to determine collectively how that land is used to meet community needs," says Joshua Barndt, the development coordinator at the Parkdale Neighbourhood Land Trust.

He grew up in the west side neighbourhood and joined the PNLT after the non-profit organization got a Trillium Grant in 2014, which allowed it to hire staff. He says anyone who lives or works in Parkdale can become a PNLT member, but the group's governed by an elected board of directors.

Barndt explains that the PNLT wants to focus on securing affordable housing as commercial spaces as well as projects to protect food security in the neighbourhood. Fittingly, the organization's in the process of getting its first piece of land: the Milky Way Garden behind the Parkdale Library.

“The land trust’s role is to hold and secure the site and make it affordably available,” says Barndt. The PNLT hopes to use the Milky Way plot for urban agriculture initiatives operated by the non-profit Greenest City.

The Guardian's David Agren describes how Donald Trump's opposition to American trade with Mexico is likely to hurt this smaller but quickly developing country's industrial sector.

[E]conomists and Mexican politicians have warned that Trump’s tantrums portend further economic problems as companies shy away from the public shaming that could come with investment in the country.

Federico Estévez, a political science professor at the Autonomous Technological Institute of Mexico, said that danger for Mexico was not a potential trade war, but the chilling effect Trump’s words would have on foreign investment.

“They’ll be careful about their capital expansion programs in a place like Mexico because Trump will jawbone them – not in private: in public,” he said.

Much of the foreign direct investment in Mexico has gone to the car industry, which took hold in states such as San Luis Potosí and sent GDP growth in the region soaring above 5% per year.

The industry’s roots in Mexico date back over decades – for years Volkswagen produced the Beetle in the state of Puebla – but the sector has grown steadily since the 1980s, to the point that most of the world’s major automakers have opened plants in the country.

“One of the main advantages automakers have in Mexico is high productivity and low wages in these plants. That’s attractive,” said Harley Shaiken, a geography professor at the University of California at Berkley, who studies the Mexican auto industry. An average car factory worker in Mexico earns around $8 an hour, compared to the $60 an hour that Ford spends on a US employee, including pay and benefits.

“You have mega transnational companies that are able to earn a lot of their investment in Mexico, in part because productivity is high and wages are depressed.”

The Toronto Star's Maria Jimenez interviews former Mexican congressman Agustin Barrios Gomez on the subject of how Mexico should deal with President Trump.

How are Mexicans reacting to Trump’s threatening carmakers not to open plants in Mexico?

Mexicans are still shell-shocked. The idea that the U.S. is now a mercantilist predator is taking a long time to sink in. People wanted to think it was campaign rhetoric, but the cancellation of the Ford plant in San Luis Potosi is bringing it home for a lot of people.

How can the Mexican government and business community counteract Trump’s refrain that the North American Free Trade Agreement is costing the U.S. jobs?

North America is competing with other regions of the world and fully 40 cents of every dollar the U.S. imports from Mexico comes from content produced in America. (Parts often cross the border several times while U.S. and Mexican factories work together to finish a product).

North America is competitive only insofar as we act as a team. Beggar-thy-neighbour policies act in detriment to everyone in the three countries.

What do independent studies conclude about the benefits of NAFTA?

According to the U.S. Chamber of Commerce, 14 million Americans have jobs that are a direct result of trade with Canada and Mexico. Mexico is the No. 1 or No. 2 export market for 23 U.S. states, including Texas and California.

The CBC carries a Canadian Press report on the changing contours of Toronto's real estate boom.

The board says strong December sales volume helped make 2016 a record year for realtors in the Greater Toronto Area.

There were 5,338 sales transactions for all types of residential property last month — including condo units and fully detached houses.

That was up 8.6 per cent compared with December 2015 — despite a tight supply of properties for sale.

The board's MLS house price index — which adjusts for the different types of properties — was up 21 per cent in December.

Japanese author Haruki Murakami may be known worldwide for novels that straddle the border between the dreamworld and reality.

But in Toronto he's better known as the most popular author among literary thieves, at least according to the city's bookstore owners.

An entire shelf dedicated to Murakami books disappeared in December at the Roncesvalles store A Good Read.

"I lost $800 the last two times this guy hit me," owner Gary Kir told CBC Toronto. "They're very easily converted into cash, because they're very high in demand and they don't turn up that often used."

Derek McCormack has worked at bookstores in Toronto for 25 years and says the most shoplifted names come and go in waves.

"It used to be all the beats," said McCormack, of Type Books on Queen Street West. "Jack Kerouac and Allen Ginsberg. Then it became [Vladimir] Nabokov by far — you couldn't keep Lolita on the shelf."