The Grande Bibliothèque in downtown Montréal, centrepiece of the Bibliothèque et Archives nationales du Québec network, is a stunning building in the heart of Montréal. 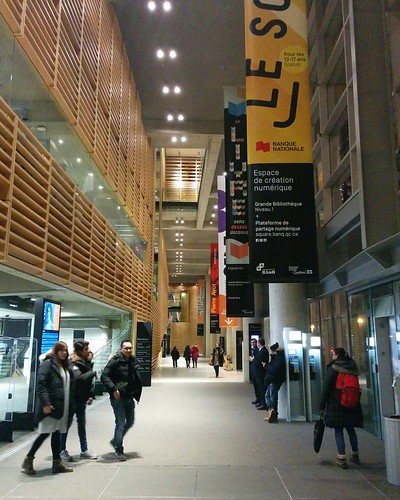 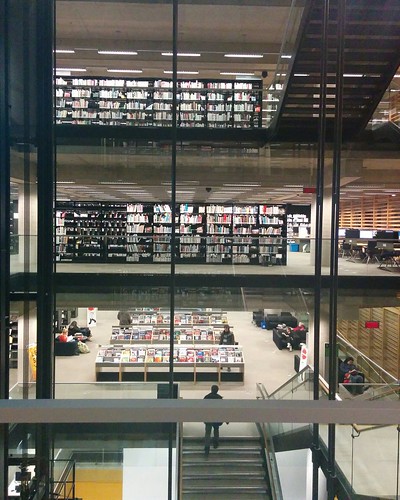 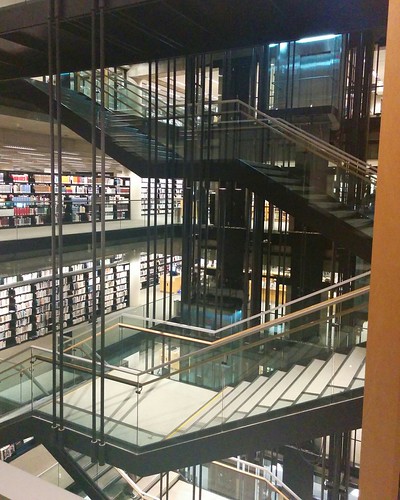 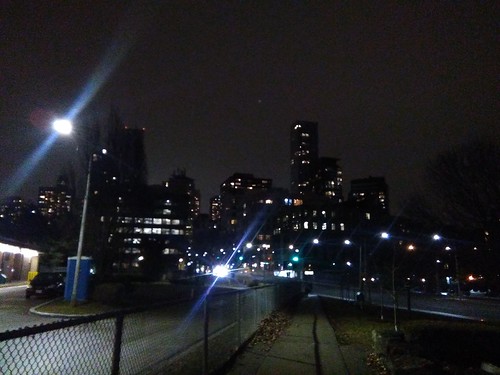 blogTO's Derek Flack blogs about how the Green Line, a proposed chain of parks in my neighbourhood built along a hydro corridor, is set to take off. Last year, I photoblogged my Jane's Walk along the proposed route. I'm excited this is coming to pass!

A proposal for a new park system connecting various green spaces along a hydro corridor on the west side of Toronto has taken a major step forward at the outset of 2017. The idea for the Green Line, which takes inspiration from New York's High Line, dates back to 2012, but now there's finally a budget and design team in place to realize the vision.

The corridor in question spans from Lansdowne to Spadina where there's already a series of mostly uninspired green spaces that lack cohesion. When you look at an aerial view of the area in question, it's easy to understand why officially connecting them makes so much sense.

Since Park People started advocating for the project in 2014, a number of steps have been made toward bringing the concept to life, but developments on the horizon are set to be the most significant yet.

Design firm DTAH has been brought on to work with the city and Park People on the Green Line Implementation plan, which will "identify opportunities for connections, new green spaces, and creating a continuous trail."

As of yet, there's no master vision for the linear park system, but DTAH will be tasked with putting one together in conjunction with community consultation that will determine what users want most from the new green space.

Via the Map Room Blog I came across an article in The New York Times offering advice to people with problems in territories unknown to them. . Speaking as someone who generally does not have troubles with orienting himself, these and the other pieces of advice offered make sense to me: Having an idea as to where are you going, both beforehand in initial planning and at the time when you're doing whatever you're doing, helps a lot.

Torontoist features a fisking, by one John Parker, of a brief article in the Economist that manages to misunderstand mass transit in Toronto.

To take the Economist’s word for it, the earliest piece of evidence that Toronto was in for trouble was when the Spadina Expressway project was halted in 1971. “The result is more traffic jams,” says the esteemed magazine in the face of about 50 years of international experience telling us that highways leading into downtown areas do more to create traffic than to reduce it.

But even before it touches on that helpful perspective, the article suggests that one of Toronto’s problems is that its residents are bailing out. It reports that, according to our mayor, Toronto residents who leave the city give “two main reasons” for not returning: “The first is that the jobs are better in places like London and Hong Kong.”

I am not making this up.

“The second is that Toronto’s public transportation is much worse.”

The article notes that the mayor who so clearly has his finger on the pulse of the average Toronto resident also has the solution to Toronto’s transit challenges: “His plan, dubbed SmartTrack, calls for building a new light-rail line…and adding six stations to existing commuter rail lines.”

CBC News' Michelle Cheung reports on how city cuts mean that the cost to parents of daycare provided by the Toronto District School Board will rise significantly, perhaps even prohibitively for some.

A proposal in the 2017 budget could see some parents paying more for child care that is already notoriously expensive.

"It's more than university," Amanda Munday said in an interview on Thursday.

Munday has two young children and she says when her four-month-old baby enrolls in fulltime daycare later this year, her childcare costs will be more than her wage.

Story is helping to round up parents and daycare operators to voice concerns over the proposed $4.1-million funding cut that could translate into higher child-care costs.

"We can fight this," Story said in an interview. "We are hoping to convince the city that this isn't a wise move to increase the already extremely high cost of child care in Toronto."

Global News' Adam Miller and Christina Stevens report on an apparent fuel spill that has been contaminating the Don River for weeks. Hasn't enough been done to that poor waterway already?

The City of Toronto is working to determine the cause of a foul-smelling fuel spill in the Don River downtown, while a local water protection charity is criticizing the lack of government action several weeks after the spill was reported.

Bill Shea, director of distribution and collection for Toronto Water, told Global News the city was informed of the petroleum spill in the river near the Gerrard Street overpass two weeks ago by a local resident, which prompted staff to contain it while they investigate the source.

Shea said some type of petroleum product had poured out of a large two-metre diameter sewer near the overpass and officials suspect it originated from a nearby area of hazardous “brownfield” land.

“The petroleum product that’s in that brownfield is leaking into our chamber,” he said.

“It’s a contaminated site that’s known to the [Ministry of the Environment and Climate Change], it’s private property and the property owner is responsible for monitoring the levels of contaminate in that site, in this case petroleum.”

In the long article "Screwed" at Toronto Life, Steve Kupferman describes how the failure of Toronto developer Urbancorp has left almost two hundred potential buyers short tens of thousands of dollars, or more, each.

Patrick and Jessie Hooker weren’t planning to buy a house. It was April 25, 2015, and they’d accompanied Patrick’s sister, Jessica, to a sales centre in a former public school near Lawrence and Black Creek Drive. Jessica had bought a home from Urbancorp, a property developer with a 24-year track record of building moderately priced condos and townhouses in the GTA. Her home was to be part of a cluster of 88 supermodern townhouses, semis and detached homes called Ravines on Lawrence. Patrick and Jessie had given her a lift there to sign the papers.

Patrick, a geophysicist, and Jessie, a software engineer, are both in their mid-30s. He has a Bunyan-esque build and a calm, frank demeanour; Jessie, who was born in Malaysia, has dark, shoulder-length hair and an easy smile. At the time, they were living in a rented condo in Fort York. They were happy there, but they knew there wasn’t enough space for a child, let alone Jessie’s mother, who they expected would one day move in with them.

Inside Urbancorp’s sales centre, the Hookers walked through the sleek model suites. There was an open-concept living room with wood-veneer floors. New appliances gleamed in the kitchen. They were dazzled by the premium finishes, the spacious layouts, the high ceilings. While they waited, an Urbancorp salesperson approached them with some news: a buyer had backed out of a deal to buy a $580,000 four-bedroom townhouse just two doors down from Jessica’s. If the Hookers acted quickly, they could reserve it for themselves.

Fearing that another buyer would snatch it up, they scribbled out four post-dated cheques on the spot, for a total of $58,000. Before they knew it, they’d spent nearly all of their savings on something that didn’t yet exist. The scheduled occupancy date for their new home was October 2017, two and a half years away.

They moved out of their condo and into a two-bedroom apartment in Jessie’s sister’s basement in Richmond Hill, hoping to save money for their down payment. For the next few months, they commuted an hour each way to their jobs downtown. In January, they found out Jessie was pregnant—they were glad they’d had the foresight to lock down a large family home.

One day last April, a year and a half before they were supposed to move in, Patrick was reading a discussion thread on BuzzBuzzHome, a website that tracks new housing developments. There was a rumour circulating that Urbancorp was in financial trouble—that the company might be on the verge of filing for bankruptcy protection, which would jeopardize all of its unbuilt projects. “At first, I thought, Oh, it’s just some random thread on the Internet,” Patrick said. “It can’t be true.” But it was, and the full story was worse than they could have imagined.