I walked early in the Sunday afternoon west from Papineau station to Berri-UQAM along rue Sainte-Catherine, the main artery of Montréal's Gay Village. The partying was over, but the neighbourhood looked to be in good shape, as lively as I'd expect--for instance--Church and Wellesley to be at the same time of day. 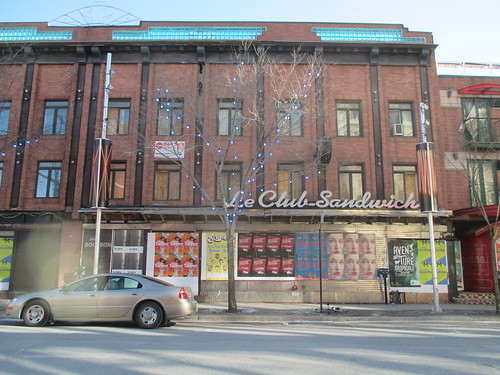 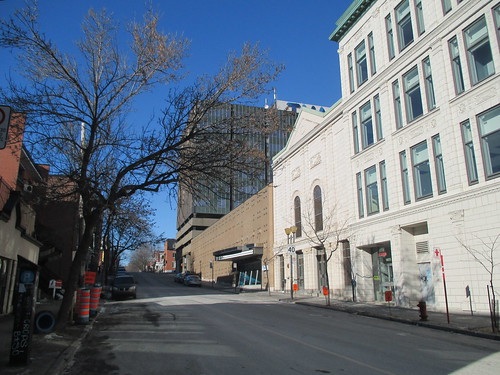 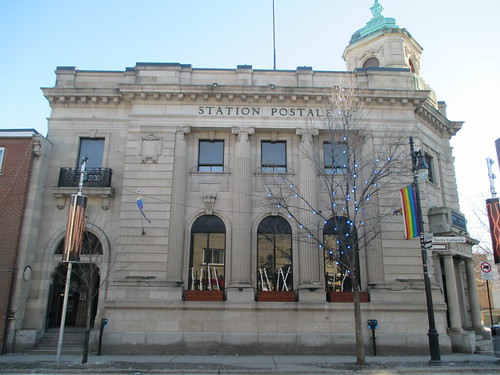 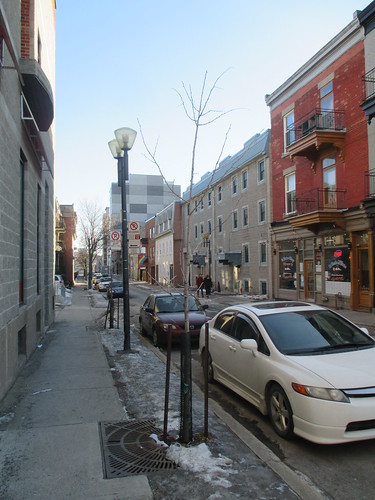 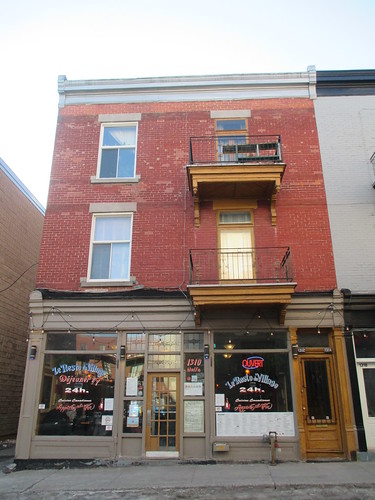 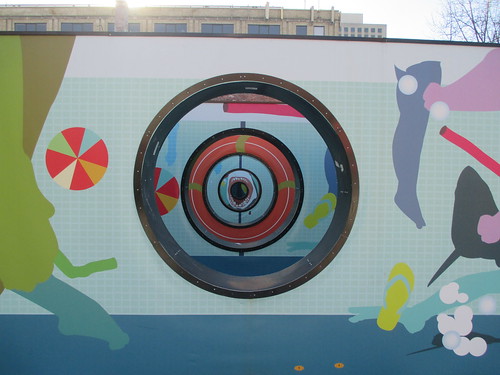 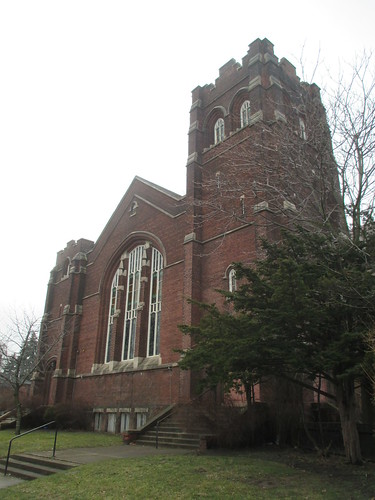 It’s hard to keep track of the number of Toronto churches that have been converted into living quarters in the past decade and it looks like another adaptation is coming to The Junction very soon. The former High Park-Alhambra United Church, located at 260 High Park Avenue at Annette, is on the market for $8,950,000.

This west end intersection is home to more than a few steeples and spires. The United Church property is part of a collection of vast, century-old churches: the former Victoria-Royce Presbyterian Church at 152 Annette St., built in 1885 and converted more recently into Victoria Lofts; the former Czechoslovakian Baptist Church at 200 Annette St., constructed in 1888 and converted into the Park Lofts; and St. Cecilia Catholic Church built in 1911 and still operating as a church.

Originally built in 1908 as a Methodist Church, the High Park-Alhambra United Church closed in 1996. The Methodists played a significant role in the Junction’s alcohol ban which kept the neighbourhood dry from 1904 to 1998.

Today, the site is roughly 1.05 acres in size while the church itself contains about 30,000-square feet of space. There’s a three-storey annex attached to the main structure, home to a gym, classroom and various meeting rooms. 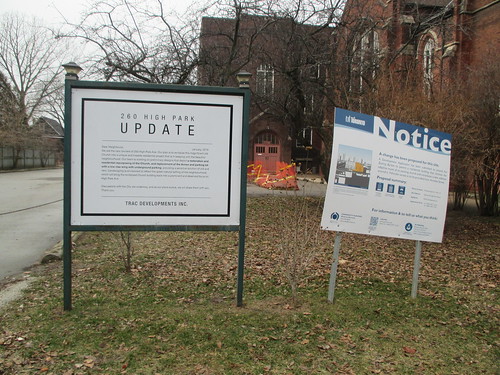 Since designated a heritage building, the current plans for the site by the condo developers who bought it seem to involves the transformation of the site into condos, keeping the architecturally and historically significant elements (the church proper) while tearing down the less noteworthy Sunday school annex. 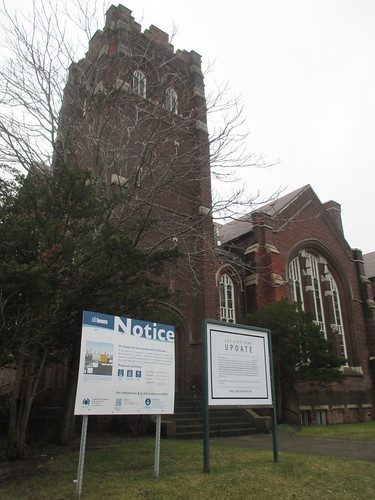 This report in The Globe and Mail was a surprise to read last night. I have no idea as to how this will rebound onto politics in Toronto and wider Ontario.

In a stunning about-face, Ontario Premier Kathleen Wynne will announce Friday that she will refuse to give Toronto permission to go ahead with Mayor John Tory’s plan to toll the Gardiner Expressway and the Don Valley Parkway.

Ms. Wynne, who is facing an election in 2018 and riding low in the polls, is expected to break the news at an event in Richmond Hill, Ont., on Friday morning, senior city hall and provincial government sources told The Globe and Mail. She had previously suggested she would not stand in the way of the city’s decision to impose tolls, approved by city council in December.

However, sources say Ms. Wynne will also announce an increase in the amount of the provincial gas tax that Ontario hands over to municipalities. One source says the new revenue could entail $170-million for Toronto to spend on public transit – close to the $200-million the city estimated the tolling plan would bring in. The gas-tax changes would also mean more revenue for municipalities across the province.

Mr. Tory sold his plan for tolls, in the range of $2 a trip, as a way to make drivers in Richmond Hill and others from around Toronto pay for the city’s two expressways, which are maintained by City of Toronto taxpayers and do not receive direct provincial funding.

The move is a blow to Mr. Tory, who until this disagreement appeared to have a good relationship with Ms. Wynne. Mr. Tory unveiled his toll proposal with fanfare in November, selling it as a bold plan to move the city forward. He acknowledged that he had reversed his previous position against tolls, which dated back to his run against David Miller for mayor in 2003. He is not scheduled to attend Ms. Wynne’s announcement Friday, but is set to address reporters at city hall afterward.

One person close to the mayor characterized his reaction as a mixture of surprise and disappointment.

Toronto might not be part of the Harry Potter universe, but the city is feeling awfully magical nonetheless.

Lately, it seems like the Statute of Secrecy has been thrown out the window here as Harry Potter-related events, shows and trivia nights have become more commonplace in Toronto.

Of course, the new 2016 additions to the Harry Potter cannon - including the first Fantastic Beasts and Where to Find Them movie and the rather lacklustre Cursed Child script - have helped keep Potter in the public eye.

But here in Toronto, this newfangled Pottermania started earlier, when The Lockhart, the city's unofficial Harry Potter bar, opened on Dundas West in September 2015. The local watering hole got international media attention and it naturally attracted lineups around the block.

Since things have cooled off a bit, co-owner and general manager Matt Laking says he and his team have been able to introduce magic shows and trivia nights on certain nights of the week.

And so, as CBC reports, the housing boom in Canada's cities goes on.

Three months after issuing its first red warning on the state of the country's housing market, CMHC said Thursday that strong evidence of "problematic" conditions nationally have continued for a second consecutive quarter.

The federal agency said in its latest quarterly market analysis that those conditions persisted due to overvaluation and price acceleration.

CMHC said its assessment largely accounts for market conditions in Vancouver and Toronto, where strong price growth has been spreading to other areas.

"Price acceleration in Vancouver, Victoria, Toronto and Hamilton indicates that home price growth may be driven by speculation as it is outpacing what economic fundamentals like migration, employment and income can support," said Bob Dugan, the agency's chief economist.

Torontoist's Sean Marshall convinces me that community opposition to a planned four-story condo tower in Rosedale does not make sense, at least not in the context of wider community needs and maybe not in a neighbourhood that already has constructions like the ones proposed on Dale Avenue.

As Toronto grows and housing prices soar, there’s a clear need for more housing units. The Greater Toronto Area can only sustain a growing population by intensifying its existing urban footprint, be it laneway housing, the redevelopment of old commercial and industrial lands (such as Honest Ed’s, Galleria Mall, or the Port Lands), or replacing low-density housing stock with new rental or condominium developments. Many of these proposals are controversial: traffic concerns are a common issue, as is the gentrification of lower-income neighbourhoods such as Parkdale or the east side of downtown. Or, long-time residents may simply resist change.

In south Rosedale, one new condominium project has proven to be very contentious. There, residents are fighting plans for a four-storey, 26-unit luxury condominium building on Dale Avenue, immediately adjacent to the Rosedale Ravine.

The proposed condominium apartment building includes six two-bedroom units and 20 three-bedroom units, and will replace three houses at 5, 7, and 9 Dale Avenue. The proponent is Dale Inc. (a subsidiary of Hunter Milborne Real Estate).

On either side of the proposed development are several similarly-sized buildings. To the east, at 21 Dale Avenue, is Kensington Apartments, a four-storey co-operative apartment building. Two doors to the west is 1A Dale Avenue, a condominium building built in 1960, which features large, impressive units. 1A Dale Avenue is three storeys at street level, but has two additional lower floors that back onto the ravine.</blokcquote>

Torontoist's Alex McKeen reported on a consultation process in Regent Park regarding a test project on guaranteed minimum income in that community.

Mike Connell has a strong opinion on how to cook the perfect steak. A cook for the Yonge Street Mission, he enjoys his job and is quick to say so.

He also has an opinion about basic income, which is what brought him to the Christian Resource Centre (CRC) Regent Park Community Food Centre on January 18, for the CRC-hosted Basic Income Pilot Consultation.

“If it doesn’t affect my ODSP [Ontario Disability Support Program],” Connell says, then “I’m all for it.”

The government of Ontario announced its intention to hold a Basic Income Pilot project in the 2016 budget. This was followed by a detailed report by former senator Hugh Segal on how the pilot should be executed in order to measure the idea’s potential for success within the province’s Poverty Reduction Strategy.

Although the exact meaning of the term ‘basic income’ can vary, the idea is that citizens in a basic income jurisdiction are guaranteed a minimum level of income with ‘no strings attached,’ in theory affording greater discretion to those who would otherwise rely on social assistance payments while having no adverse effects on higher earners.

I have to admit to not being amused, as described by the National Post in the article "An early test of Trump’s ethics pledge: The glittering tower in Vancouver about to open its doors" written for the Washington Post by Drew Harwell, Alan Freeman and Jenny Peng, that Trump Tower in Vancouver is set to open and in so doing open up space for a whole slew of problems for the Trump Administration. I would prefer Canada not get involved at all in the political issues of our southern neighbour.

As President Trump settles into his first week in the White House, the first paying guests will begin checking in tonight into the lavish suites of the Trump International Hotel & Tower Vancouver, a glass skyscraper developed by the son of one of Malaysia’s wealthiest business executives.

The tower, the first foreign business launch of the Trump brand during the new presidency, is an early test of Trump’s controversial decision to retain ownership of his businesses while promising to combat ethical conflicts by removing himself from the management. It also shows how Trump properties around the world are likely to become focal points for protest or other forms of expressions aimed at the U.S. president and his policies.

Trump and his family do not own the Vancouver project, but the president has a stake in its continued success. The developers have paid Trump’s company for the use of his name while they also pay fees for his company to manage the hotel, according to federal financial disclosures filed by Trump.

Developers say that the hotel, where workers pulled the covers off its imposing “Trump” lettering the day before Friday’s inauguration, has seen an “overwhelming amount of reservations.” Deep-pocketed buyers have also scooped up condos. Buyers include an American tech billionaire who paid $7.6 million for three luxury flats.

To many locals, the building is something of a political symbol. Some, including Vancouver’s mayor, have protested the name that appears in lights above the skyline. Eggs were thrown at a Trump hotel window during the Women’s March there on Saturday that filed past the property.

Trump’s association with overseas hotels was cited in a lawsuit brought this week by ethics experts, who argued that permits or other benefits granted to Trump-branded properties could violate a constitutional ban on foreign government payments to the U.S. president.</blockquote