The Saint-Louis Square on rue Saint-Denis must be incredibly lively in summer, and living. 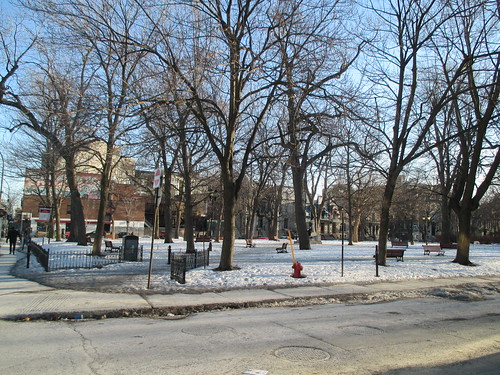 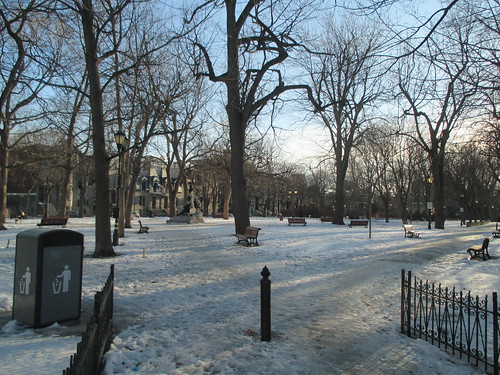 Embedded in the sidewalk on Evelyn Avenue, in the Junction south of Dundas West, this survey marker is one of the many that went towards the making of our maps. 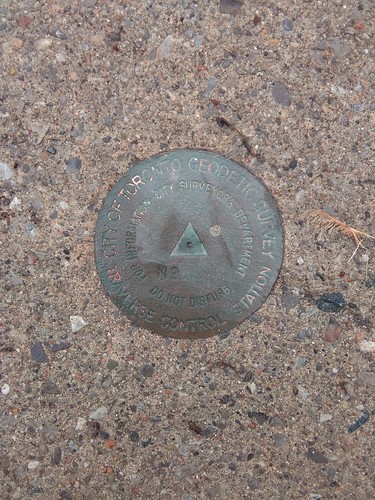 The Toronto Star's Jennifer Pagliaro reports on the latest scandal involving the Scarborough subway debate, allegations of massive systematic confusion regarding the costs of an extension. This is getting meta, and ridiculous.

The Toronto Star's Ben Spurr reports, with only a little bit of justifiable snark, about the arrival of the latest new TTC streetcar from the Thunder Bay plants of Bombardier.

What costs $5 million, weighs 48,200 kilograms, and should have been here more than two years ago?

The transit commission’s fleet of new low-floor light rail vehicles grew by one on Thursday, with the arrival of car 4431 at the TTC’s Hillcrest Yard on Bathurst St. It will be the 31st vehicle to enter service, and is the first to be delivered this year.

It was something of a bittersweet occasion for the TTC. Under the original terms of its troubled deal with manufacturer Bombardier, the agency was to have more than 109 of the new cars by now.

“It’s always nice to have another new streetcar in service, for sure,” said TTC spokesperson Stuart Green. “Bombardier has committed to delivering 40 this year and we look forward to more arriving.”

The Toronto Star's David Rider reports on how Toronto city manager Peter Wallace has criticized the Ontario government's refusal to let Toronto levy tolls on the Gardiner Expressway and the Don Valley Parkway.

Peter Wallace’s withering assessment of Wynne’s surprise decision to block tolls is in a three-page letter to Mayor John Tory and the 44 councillors sent Tuesday and obtained by the Star.

While bemoaning Toronto’s lost fiscal opportunity and flatly rejecting Wynne’s argument she has replaced the lost revenue, he urges council to keep pushing the province for road pricing.

Tolling the Don Valley Parkway and Gardiner Expressway, approved by council in December after Wynne said she would not block tolls, would have helped bridge the big gulf between the city’s limited means and considerable ambitions, Wallace wrote.

Tolls were to “provide stable, significant revenue sources to invest in transit and transportation polices and, importantly, to shift the burden from property tax and transit riders towards user fees for roads.”