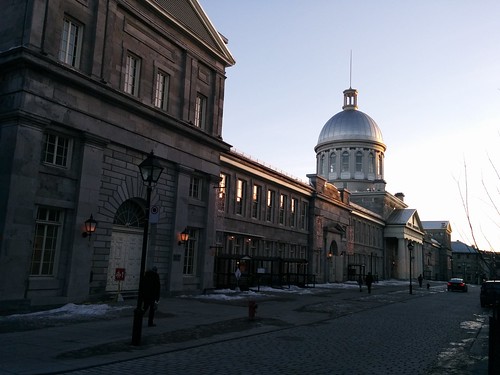 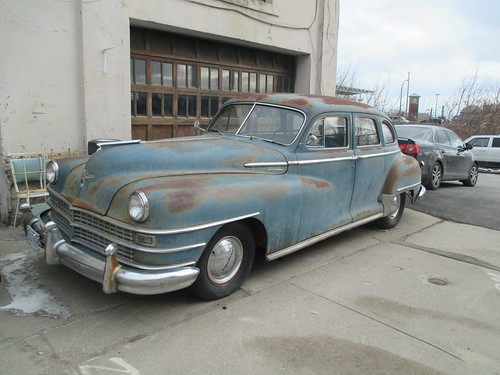 The Globe and Mail's Dakshana Bascaramurty reports about a devastating fire at the Badminton and Racquet Club here in Toronto, just west of Yonge and St. Clair. The pillars of smoke are rising, and transit links at St. Clair station have been cut off.

A massive six-alarm fire has caused serious damage to a 93-year-old members-only racquet club in midtown Toronto and has now spread to an adjacent building to the north.

Toronto Fire says The Badminton and Racquet Club at 25 St. Clair Ave. West and neighbouring buildings have been evacuated and there are no reported injuries. Of the approximately 160 firefighters on the scene, one captain was separated from his team and injured on site but has since been rescued and was treated by paramedics, said Capt. David Eckerman.

Capt. Eckerman says they received a call for a fire from occupants fleeing the club around 9:20 a.m.

By the time firefighters arrived, fire had ripped through the roof, the south part of which has since collapsed. The intersection of Yonge and St. Clair has been closed. The St. Clair subway station has been evacuated and subway trains, streetcars and buses that pass through the intersection have been diverted, according to the TTC.

Capt. Eckerman said the south and east walls have partly caved in and could collapse. The north wall is also “spongey,” he said.

I share in the relief of Canadians generally that, as reported by CBC News, Trudeau's meeting with Trump apparently went without incident, with no warnings of threats to Canadian economic interests. (Yet?)

The much-anticipated meeting between Prime Minister Justin Trudeau and U.S. President Donald Trump on Monday did much to assuage fears of Canadian businesses wary of the prospect of a trade war.

After a formal greeting between the two leaders followed by meetings, the White House and the Prime Minister's Office issued a joint statement on Monday reaffirming the strong bonds between Canada and the U.S.

"No two countries share deeper or broader relations than Canada and the United States," the statement read, making note of the two countries' "shared economic interests," including the $2 billion in trade that flows between the two every day.

That's a much different tone than the one witnessed on the campaign trail, when Trump repeatedly attacked the North American Free Trade Agreement that governs commerce between the U.S., Canada and Mexico.

Mexico has been the frequent target of Trump's ire, but Canadian businesses and commentators in Canada had concerns that the new president would also seek to tighten the trading border to the north. Much is written about how key the U.S. is to Canada's economy, but 32 states claim Canada as their largest export market, shipping $267 billion worth of goods and services north, BMO economist Michael Gregory said.

The Canadian government is fond of repeating that Canada is the most important foreign market for 35 U.S. states, in an effort to head off rising American protectionism, and this statistic came up several times during a crucial first meeting Monday between Prime Minister Justin Trudeau and President Donald Trump in Washington. But this calculation of the benefit Canada provides to its southern neighbour glosses over the fact that the United States, with ten times the population, is far less reliant on foreign trade in general.

According to Trevor Tombe, a University of Calgary economist, there are in fact only two American states out of 50 – Michigan and Vermont – where trade with Canada exceeds 10 per cent of their annual economic output.

By comparison, Canada’s provinces are in large part overwhelmingly dependent on keeping the borders open with the U.S. Forty-nine per cent of Ontario’s gross domestic product depends on trade with the United States. For Quebec, that number is 23 per cent. For Alberta, it’s 31 per cent.

A Nanos Research survey, conducted between Jan. 26 and Feb. 1, found that 58 per cent of Canadians surveyed would “support” or “somewhat support … Canada having a trade war with the U.S.” if the Trump administration slapped new tariffs on goods from Canada.

Only 35 per cent were opposed or somewhat opposed. Veteran Canadian trade consultant Peter Clark said he believes Canadians who talk tough to pollsters may be overestimating Canada’s bargaining power with their neighbour.

“The Americans just have to increase their own production 10 to 15 per cent to replace what we provide them, generally.” He said fights over softwood or shingles or wheat in decades past are mere skirmishes compared with the much bigger conflict that could arise if Canada and the United States get into a tit-for-tat war over border taxes.

CBC News' Nicole Mortillaro reports on how American scientists are facing communications restictions similar to those imposed on Canadians during the Harper government.

Under former prime minister Stephen Harper, the federal government made it progressively more difficult for Canadian government scientists to communicate their findings to the public.

Efforts by journalists to communicate directly with scientists to obtain information about something as benign as "rock snot" ran into roadblocks. Funding was cut to various scientific agencies, including Environment Canada, and thousands of scientists were laid off.

The scientists' counterparts in the United States quickly rallied to their defence. Op-eds were penned in major scientific publications lamenting the lack of independence for Canada's science community. Petitions were signed.

Today, it's the Canadian government scientists — now free to speak directly to the press without pre-approval by intermediaries after changes implemented by the Trudeau government — battling on behalf of American scientists.

Just days after Donald Trump became president of the United States, alarms were raised after it was revealed that he had emailed several government departments advising them to refrain from posting anything to social media.

Rignam Wangkhang writes for NOW Toronto about the disputes of the tenants of Parkdale tower 87 Jameson Avenue with their landlord, MetCap. Between steep rent increases and an apparent lack of maintenance, tenant advocates argue that MetCap is trying to drive its tenants out so the tower could be gentrified.

Although she’s been living at 87 Jameson since 1977, Rajaram isn’t even sure what days she’ll have running water.

“I work nights, and when I come home sometimes I don’t have water. I have to buy bottled water to wash my mouth,” says Rajaram, 63.

Last Wednesday, February 8, Rajaram rallied with fellow residents outside the offices of the Landlord and Tenant Board on St. Clair East to protest a request by apartment manager MetCap Living Management Inc. to raise rents 3 per cent above the 2 per cent allowed by provincial guidelines for each of the next three years. The company says the increases are to cover the cost of balcony renovations as well as upgrades to the building’s boiler room and garage at the 91-unit building.

But tenants say the proposed increases would hike their rents (currently about $1,000 a month) by several hundred dollars a year, which is simply unaffordable – and unfair given MetCap's refusal to undertake long overdue repairs, including to properly heat the building in winter or deal with ongoing pest control problems. The tenants, who have since February 1 refused to pay rent, describe a climate of disrespect for them from building management.

The National Post features Suzanne Wintrob's article describing the emergence of high-end rental units in Toronto, as an alternative to condos.

Six months ago, with his two children off to university, the computer consultant decided it was high time he traded in his snow shovel and lawnmower for a more carefree lifestyle. But rather than pour his money into a condo, Spira banked the cash from the sale of his house and moved into a two-bedroom, 1,500-sq.-ft. unit on the 27th floor of the neighbourhood’s brand new rental tower.

He’s not alone. As Toronto’s population grows and condo vacancies decline, there’s a growing demand for purpose-built rentals, according to condo research firm Urbanation Inc. The number of proposed purpose-built rentals in the city increased to 27,812 in 2016, up from 10,513 in the year-earlier period. And it’s a trend the organization expects to continue, said Pauline Lierman, director of market research.

Spira’s new address is The Heathview, comprising two 30-storey towers by Morguard Corp. with 586 units ranging from 450 sq. ft. to two-storey, 2,070-sq.-ft. townhouses. He liked the fact that it was a new building because “I didn’t have to go in and clean up someone else’s mess.”

“I wanted to get out of the market,” says Spira, 60. “I didn’t want to own. I wanted to just put the money away and enjoy myself.”

I’m sure many of us grew up with the mentality that buying is always the best option when moving out on your own. The argument has remained consistent: renting means throwing away money, while purchasing is investing.

In Toronto’s real estate market, people often assume the value of their houses and condos will inevitably go up in value. Although many factors contribute to the flux and flow of condo prices, including a building’s location, age and condition, the reality is that the value of many condos either remains the same or drops by a small percentage over time. This can make the real estate market a roulette game for aspiring young buyers and first-time home owners.

“I recently sold my condo in the downtown core after about three years of ownership. My overall profit was negligible given the condo market saturation,” says Toronto native Josie Sorelli. “In retrospect, I wish I had crunched the numbers more accurately before buying. If I’d had a more conservative estimate of my return on investment, and given all the additional costs I incurred, I would definitely have opted to rent. Closing costs, real estate fees, property taxes and condo fees put me in the red. Hindsight is 20/20!”

Brand new condos are coming onto the market every day, so some condo owners hoping to buy bigger homes may face difficulties when attempting to sell their condos for a price comparable to a house. Those who do successfully sell their condos and choose to purchase again often have to look outside of the city for houses they can afford.

So why has renting been stigmatized as not a smart option?

The Toronto Star's Ben Rayner describes how city regulations and neighbourhood opposition may end plans to reopen the Matador Club, a renowned old Toronto music venue. I'm not surprised, sadly: College and Dovercourt is a perfect neighbourhood for condos.

The fabled Matador Club at the corner of College St. and Dovercourt Rd. has stood empty for 10 years now, seven of those in the hands of new owners who’ve long hoped to restore the 101-year-old space to its original glory as a revamped, remodelled live venue and community event space dubbed the Matador Ballroom.

Now, when Toronto’s music scene is agonizing over a spate of recent venue closures — last week, Bloor West café the Holy Oak announced it will be shuttering by March, joining a list that already includes the beloved Silver Dollar, the Hoxton, Hugh’s Room, Tattoo, the Hideout, and the Central — the Matador risks becoming the next casualty. Again.

When it finally got its liquor licence at this time last year despite staunch opposition from some very vocal and well-organized objectors in the surrounding neighbourhood who remember the room as the city’s most infamous after-hours boozecan, many observers assumed that it would reopen eventually. This is, after all, a historic venue in a self-professed “music city,” a space where the signatures of storied past performers such as Leonard Cohen and Stompin’ Tom Connors adorn a dressing-room wall that was almost bulldozed into a city parking lot.

Not so. The Matador remains ensnared in a nightmare of neighbourhood opposition and zoning and permit issues, and its would-be rescuer, Paul McCaughey — who purchased the building with his brother in 2010 — is growing weary.

“When you say the Matador will eventually get opened . . . there is no ‘eventually’ any longer,” he says, frankly. “The Matador will be the next headline if we do not get serious movement within the next two months.

“I will sell it to a condo developer and they will have a Shoppers Drug Mart in the bottom of it, OK?”