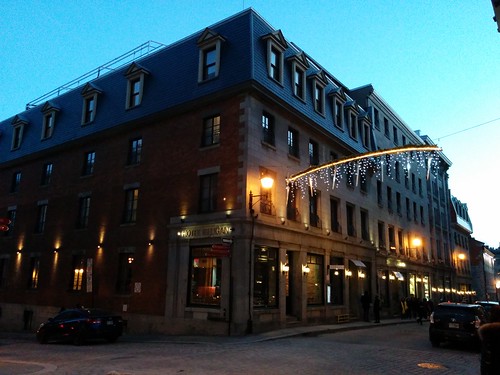 Wandering Vieux-Montréal in the emerging evening light, I wandered past Hotel Nelligan, an establishment named after the great poet Émile Nelligan. 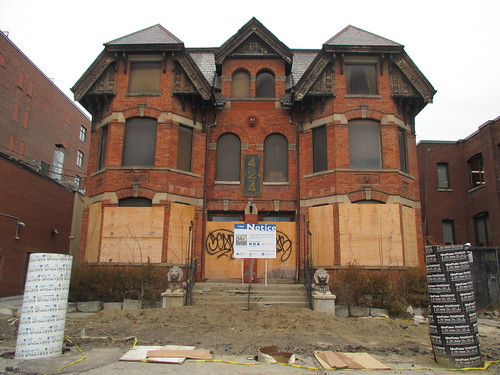 The recent sale of the MacLeish and Powell houses, at 422 and 424 Wellington Street West, was a prelude to their transformation into the base of the new Wellington House condo development. The official documents at the website of the City of Toronto go into more detail about the project.

The proposal includes the relocation of the existing listed heritage three-storey semidetached houseform building to the south and east of its current location, resulting in a minimum setback of 0.4 metres from both the south (Wellington Street West) and east lot lines. A four-storey base building (plus mezzanine) with a height of approximately 18.9 metres would connect to the rear of the listed heritage building at the first, mezzanine and second floors of the new building. The new base building would be set back approximately 0.3 metres from both the east and north (rear) lot lines.

Very few book stores in the world have been fought off widespread hate, battled censorship at the Supreme Court, and acted as home base for an entire community of people. Toronto's Glad Day bookshop has, which is why it's even more special that it's not only Toronto's oldest bookstore, but the world's oldest LGBT bookstore.

Glad Day took the title after New York's Oscar Wilde bookstore closed in 2009 because of low sales and high rent. That shop opened in 1967.

Glad Day was opened in 1970 by Jearld Moldenhauer out of his home in the Annex. The residential space also doubled as the office for The Body Politic, a gay and lesbian political paper, which eventually morphed into Xtra and then to the now online-only DailyXtra.com.

After folks moved in and out of the home, Moldenhauer and a group men bought a place in Cabbagetown at 138 Seaton Street and operated the shop out of there.

It was a time when a gay and lesbian bookstore could exist out of someone's living room and word spread wide enough for the city's queer population to know exactly where to go — all very much on the down low and in fear of violence.

blogTO's Derek Flack looks at how a house downtown, in the area of Trinity Bellwoods, managed to rise in price by almost a million dollars between its listing in June of last year and its sale now.

Every week in Toronto it seems like a handful of homes sell for so far over asking that you wonder if the world's gone mad or if real estate agents aren't relying on under-listing properties even more frequently than before given the intense seller's market it the city.

This isn't, however, the only way to get a sense for just how high demand is in Toronto right now. In fact, it's better to track a property that's hit the market multiple times in a relatively short time span to get a sense for how hot things have got.

Shortly thereafter, its neighbour at 38 Beaconsfield sold for $2,096,000. Well, you know what happened next. The thought that #40 could be moved for more cash crossed someone's mind, and it was given interior renovations before being listed at $2,450,000 this month.

CBC News' Shannon Martin reports on how she became a couch surfer, as rent increases outpaced her ability to pay.

I'm 32 years old, work at my dream job and have an amazing circle of family and friends who love me. Life is pretty great.

There's just one thing — and I can't believe I'm about to admit this to you, but here goes.

For the record, I did have a nice place. But then my rent went up nearly $1,000 per month.

What can be said but that this, reported by the Toronto Star's Jennifer Pagliaro, is unacceptable?

A $100,000 consultant’s report meant to help determine whether transit projects worth billions of dollars are cost-effective has been kept secret by the city.

In June, the city paid the firm, Arup, which consults on transportation projects worldwide, to provide business case analyses for several projects planned by the city, including Mayor John Tory’s original “SmartTrack” idea for additional stops along the GO Transit rail line travelling through Toronto, and the controversial one-stop Scarborough subway extension.

The report produced by Arup, however, was never publicly released as part of a city staff report to executive committee in June, which was then debated at a July council meeting.

The missing consultant information adds to a series of questions over future transit plans that include delayed reports and a secret briefing note on the Scarborough subway extension that has been called a “political football,” and still-incomplete analysis of the mayor’s key campaign promise for an additional heavy rail service that is moving ahead, while heavily modified.

The Toronto Star carries May Warren's article for Metro noting an upcoming gallery showing in Mississauga celebrating the life of that city's long-time mayor Hazel McCallion. I may well go to Mississauga for this!

She has inspired paintings, crayon drawings, even a Mississauga version of the Mona Lisa.

Now former Mississauga mayor Hazel McCallion is getting her very own art exhibit to show off these tributes.

Stuart Keeler, curator and manager of museums for Mississauga, said the city is looking for submissions from the public and doesn’t think they will be hard to find.

“Sometimes monthly, we get phone calls of, ‘I have a painting of Hazel,’ ” he said. “This is a common occurrence.”

They’ve already received 25 works of art for the spring show and there’s no cap on how many they’ll take.

I am definitely going to see Winter Stations this week, described by the Toronto Star's Peter Goffin. The only question is whether I'll be going Thursday or Friday.

A hall of mirrored buoys, an upside-down forest, a giant dog made of recycled materials.

For the third year in a row, the Winter Stations Design Competition has made over eight lifeguard stations in the Beach into fantastical art projects.

Dotting the sandy shore, from the foot of Woodbine Ave. nearly all the way to Balmy Beach Club, the winter stations will add some artistic curiosity to the chilly water front for the next five weeks.

“One of the reasons (Toronto) is a glorious city is because of the arts,” said Mayor John Tory, who was on hand Monday afternoon to help unveil the installations.

“This celebrates artists from here and from abroad and it allows part of the soul of the city to come out. It allows people to each have their own reaction to these creative installations that we’re seeing on the beach in the winter.”

The Globe and Mail's Mike Hager notes how the lack of official statistics on foreign buyers of real estate in Toronto means, among other things, that less reliable data metrics like search engine hits need to be used. This just proves how modern societies need good data to address real problems.

That’s where Toronto’s real estate market is heading, according to a Chinese-language promotional article posted last month on Fang.com, a Beijing-based web portal that lists thousands of homes for sale in countries around the world.

“You will really cry if you still don’t buy,” the same posting blares.

Toronto has become the “dark horse” of the Canadian real estate market, asserts Haifangbest.com, another site jammed with Canadian home listings. It contrasts Vancouver’s continuing drop in prices with a prediction that Toronto-area homes will rise 8 per cent in value this year.

In the months since British Columbia began taxing international buyers 15-per-cent extra on homes in and around Vancouver, those marketing Canadian real estate overseas have shifted their focus to Toronto. Last year, Toronto overtook Vancouver to become the most sought-after Canadian city for Chinese home buyers searching the property listing service Juwai.com, peaking in August just after British Columbia announced the tax aimed at curbing the public outrage over skyrocketing prices. Searches for properties in Toronto proper now surpass the total inquiries for Vancouver, Montreal, Calgary and Ottawa combined.

Richard Silver, a Sotheby’s realtor and past president of the Toronto Real Estate Board, estimates close to 20 per cent of his clients are international buyers – from China, India and the Middle East – interested in the luxury condos and houses he sells in and around the downtown core.

The National Post hosts Theophilos Argitis' Bloomberg News article looking at the causes of the housing price boom and speculating about ways to end it without wrecking the wider economy.

Prices in Canada’s largest city surged more than 20 per cent over the past year, the fastest pace in three decades, data released last week show. Some of the city’s neighbouring towns are posting even bigger gains.

It’s become a matter of considerable alarm. Stability is one concern: if the market tumbles, so will Canada’s economy. Pricier real estate also drives away less-affluent, younger people and boosts the cost of doing business, eroding competitiveness.

“I don’t think anybody is cheering,” said Doug Porter, the Toronto-based chief economist of Bank of Montreal, who used the dreaded “bubble” word last week to describe the market. “I don’t see who benefits other than real estate agents. It’s trapped wealth.”

So, what’s driving the boom? The housing industry — builders and brokers — claim lack of supply is the main culprit. Others, Porter included, see demand as the problem. Lately, evidence is mounting that speculation is behind the jump.

The Globe and Mail's Robert Fife reports on the problems facing North American integration, Canada's Foreign Affairs Minister Chrystia Freeland promising not to desert Mexico, at least not on multilateral issues whatever these might be.

Foreign Affairs Minister Chrystia Freeland assured Mexico on Tuesday that Canada will not strike a bilateral deal with Washington in negotiations to revamp the 1994 North American free-trade agreement. During a panel discussion with Mexican Foreign Affairs Secretary Luis Videgaray, Ms. Freeland sought to dampen concerns that the Trump administration would seek bilateral talks with each of its NAFTA partners.

Ms. Freeland stressed that it is too early to even talk about what might be up for renegotiation since the Senate has not yet confirmed commerce secretary nominee Wilbur Ross, who will head the trade negotiations, and Robert Lighthizer, the nominee for U.S. trade representative.

“There is no negotiating process yet initiated. In fact, the United States does not even have a team in place to begin those negotiations. So let’s not put the cart before the horse,” she said when asked if Canada was prepared to throw Mexico under the bus to protect this country’s interest from President Donald Trump’s America-first trade policy.

“But we very much recognize that NAFTA is a three-country agreement, and if there were to be any negotiations, those would be three-way negotiations.”At the same time, Ms. Freeland said there will be bilateral issues that Canada and the United States will want to discuss separately – something Mr. Videgaray conceded would happen when it comes to Mr. Trump’s plans to build a wall to stem the flow of illegal immigrants and drug smuggling from Mexico.

“We understand that there are some issues that, by nature, are strictly bilateral to the U.S.-Canadian relationship … just as Canada acknowledges we have a bilateral relationship with the U.S. and I am sure [Ms. Freeland] would prefer to stay away from some of those aspects of that.”