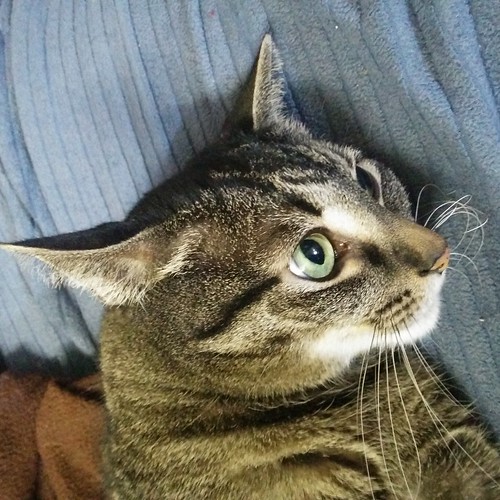 Thursday, when I was walking west along College, I passed by TOT Cat Café (298 College Street, Toronto's only cat café. I had long been curious about the place, following the different fundraising efforts aiming to set up a cat café in Toronto starting a couple of years ago and then hearing last spring about the scandal when the Toronto Humane Society stopped supplying this cafe with cats for adoption (CBC, Toronto Star, Reddit). The sign outside showed that the cafe was still in operation, and promised. I needed some coffee and could enjoy something sweet, so why not go inside? 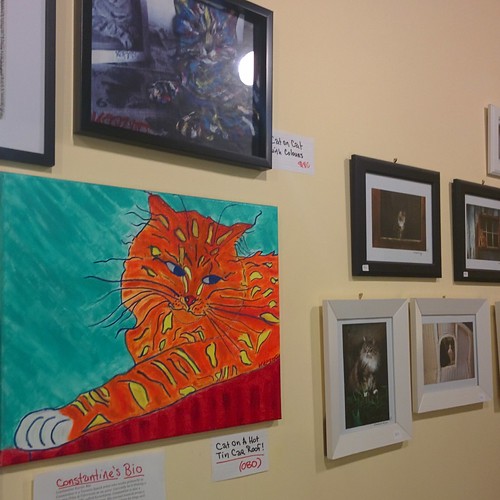 The cafe is organized as a sort of double enclosure, the cafe space surrounding the inner double-doored chamber open to the street where the cats reside. 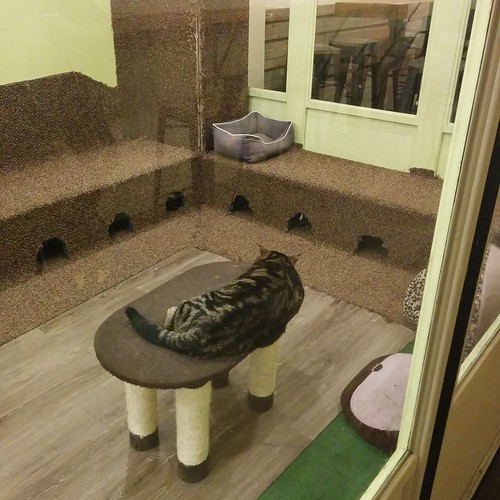 After I finished my enjoyable coffee and cheesecake, and being briefed on the rules, I passed inside. There were thirteen cats, I was told, most hiding in the carpeted cubby holes at the far end, but some spilling into bowls and on top of ladders in plain view. The cats--apparently sourced by Scarborough Bluffs Cat Relief, part of the effort to retrieve cats and other pets dumped at the Scarborough Bluffs--were available for adoption at a cost of $C 150 per cat. Posters listing the cats' names, ages, and availability were on the west wall, but the other people there were not paying close attention to those. They were looking at the cats. 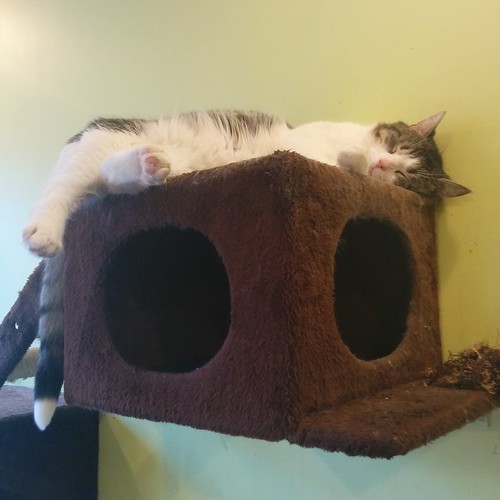 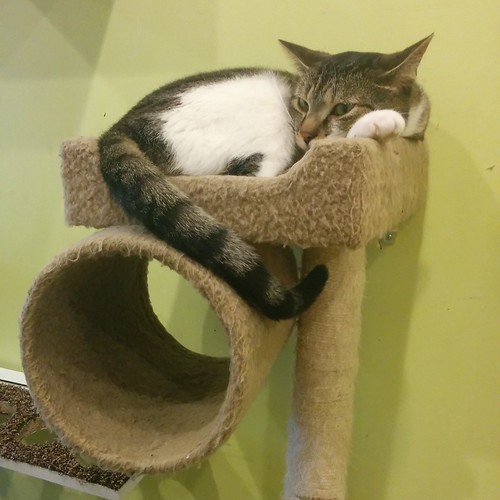 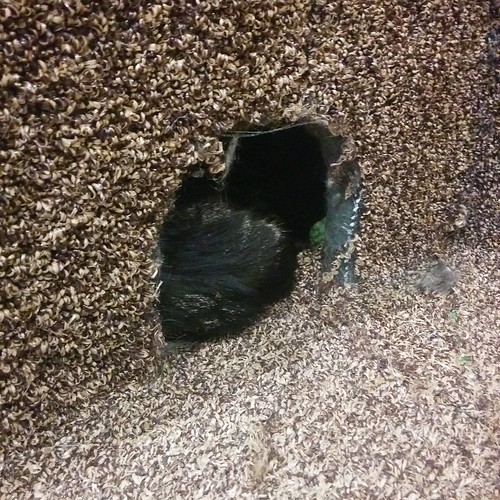 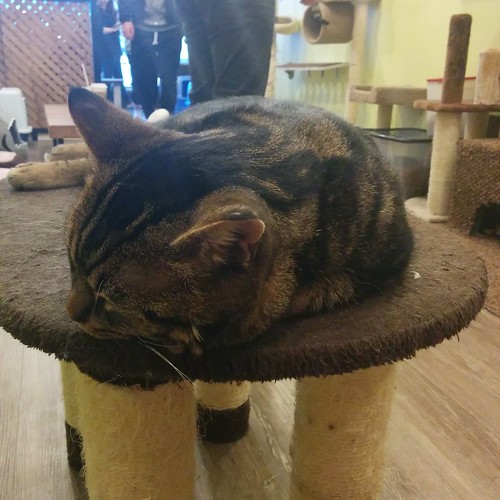 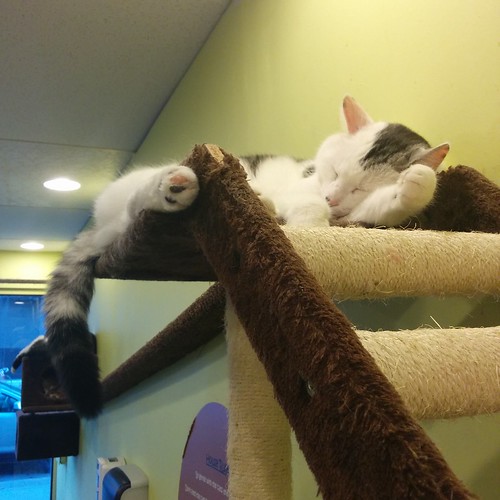 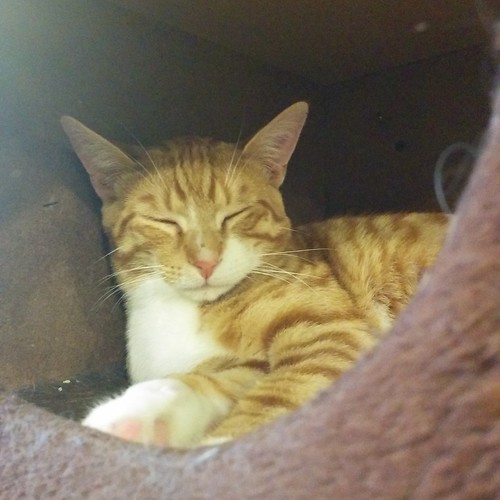 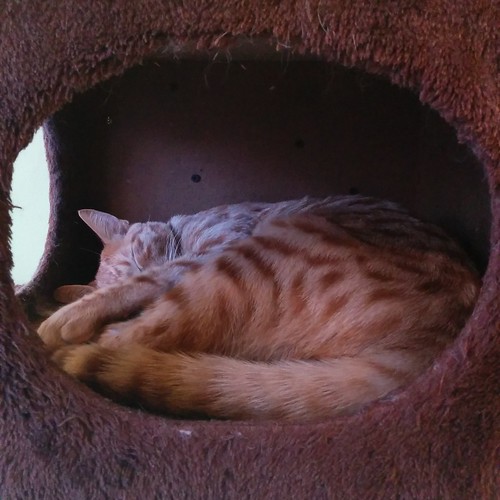 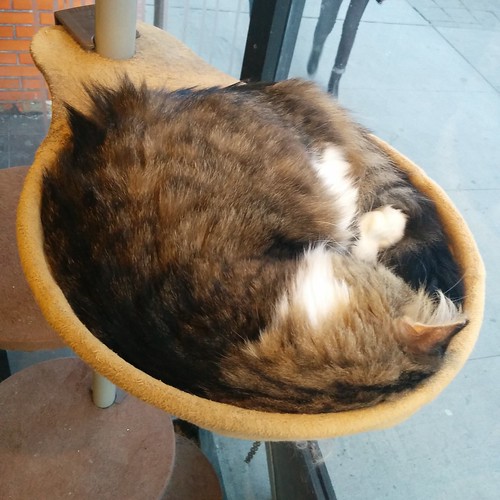 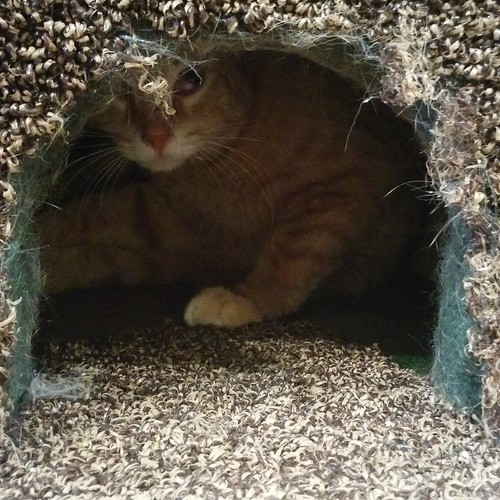 As far as I could tell, the cats seemed to be in good shape. The staff was clear in laying out the rules--no feeding, no poking, and so on--and the people in the cat enclosure with me obeyed these. The cats, for their parts, seemed both healthy and relaxed, comfortable enough with their environment to sleep and contented with being gazed at from afar. I left not feeling as if I had exploited the cats in an situation unsuited for them--the whole institution seemed to be working out. 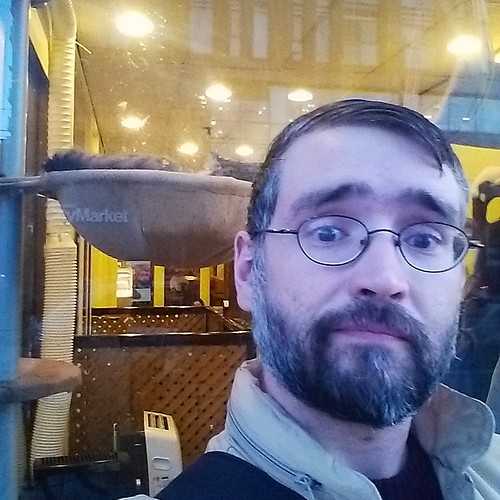 Urban Toronto's Stefan Novakovic describes plans to build a tower 98 storeys tall (!) on the southeast corner of Yonge and Gerrard.

Rising to an incredible 98 storeys, Toronto's—and Canada's—tallest building could be coming to the southeast corner of Yonge and Gerrard. Designed by New York's Kohn Pedersen Fox for Cresford Developments, the super-tall tower would feature a mix of retail, office uses, and residential space. The height? 343.9 metres.

With the developers now putting forward a submission to the City of Toronto, further details of the project are expected to be revealed in the coming weeks. Cresford announced a year ago now that a new building—YSL Residences—would be a new landmark development in Downtown Toronto. Now released, renderings depict a sleek, faintly sculptural form with a smooth, glassy exterior, free of balconies. Fronting the corner, the existing three-storey heritage building at Yonge and Gerrard would be maintained, with a small, angular podium volume rising above.

Located kitty-corner from the 78-storey Aura at College Park, which—for now—remains the country's tallest residential building, the development would add a declarative height peak to what could become one of Toronto's tallest communities. Immediately across Yonge Street, the Delta Hotel site is currently subject to another massive redevelopment plan, with Great Eagle Holdings' 'Chelsea Green' proposal calling for three architectsAlliance-designed high-rises, including two 88-storey towers, and a 49-storey building.

The architect's renderings are amazing.

blogTO's Derek Flack notes that 205 Yonge Street has been put up on the market for the initial asking price of $C 1.

One of Toronto's most beautiful buildings has hit the market for the grand sum of $1. Just don't expect the former Bank of Toronto at 205 Yonge St., to sell for anywhere near that price.

Designed by landmark Toronto architect E.J. Lennox in 1905, the bank was built in the neo-classical style with a remarkable domed roof, terrazzo floors, marble walls, and striking Corinthian columns that face Yonge Street.

It's one of two glorious old bank buildings that'll be injected with new life as the Massey Tower rises above them. Nearby 197 Yonge St. is also one of Toronto's iconic historical structures.

As for the listing price, it's basically an auction. Real estate agent Shawn Abramovitz argues that this pricing strategy also hints at the difficulty of putting a value on such a unique property.

The Globe and Mail's Alex Bozikovic really quite likes the proposed redevelopment of the area of Honest Ed's and Mirvish Village.

Mirvish Village is dead. Long live Mirvish Village. In the area near Honest Ed’s this week, workers had put up fences around a string of Victorian houses on Markham Street, preparing to gut them, while creatives assembled an “Art Maze” inside the old Honest Ed’s store for a festival and sendoff, An Honest Farewell, this weekend.

It’s the end of an age at Bloor and Bathurst Streets: the loveable shambles of Honest Ed’s is gone forever. But as this weekend’s events suggest, the past will continue to have a presence on the site.

The new development at Mirvish Village, after two years of conversation between developers Westbank, locals and the city, is inching closer to approval, with a new proposal submitted in January to the city. Westbank paid $72-million for the site, a big number, and yet the result is as good as private development gets in Toronto. It features meaningful preservation of heritage buildings, a serious sustainability agenda, and affordable housing – not to mention an architectural and leasing strategy geared at making the place as lively as possible, even a bit weird.

That’s all because the developers have been ready to engage in meaningful discussion: The city and the community have made this proposal better through talking and listening.

When the first Westbank proposal emerged in early 2015, “I think [the City of Toronto] were surprised by how much we were offering,” the main architect, Vancouver’s Gregory Henriquez, told me last week. “That’s how we deal in Vancouver: We come with our best offer.”

The head of Canada’s largest lender said Toronto housing is “running hot” and is fueled by a "concerning mix of drivers" that include lack of supply, continued low rates, rising foreign money and speculative activity. Similar circumstances in Vancouver prompted British Columbia’s government last year to impose a 15 percent tax on foreign buyers.

“In the absence of being able to use higher rates to reduce that, I do think we’re going to at some point have to consider similar measures to slow down the housing price growth," McKay said Friday in a telephone interview.

The comments from the bank CEO come as frustration grows over the unaffordability of properties in Canada’s biggest city. The average home price in Toronto jumped 22 percent in January from the previous year, the fifth straight month of gains topping 20 percent. Listings have dropped off, down by half from last year, squeezing prices further.

The CEOs of Canada’s other big banks last year called on the government to increase housing regulation amid skyrocketing prices in Vancouver and Toronto. National Bank of Canada CEO Louis Vachon said that minimum downpayments should return to 10 percent from 5 percent, while Bank of Nova Scotia head Brian Porter suggested his company was pulling back on mortgage lending due to concern about high home prices in those two cities.