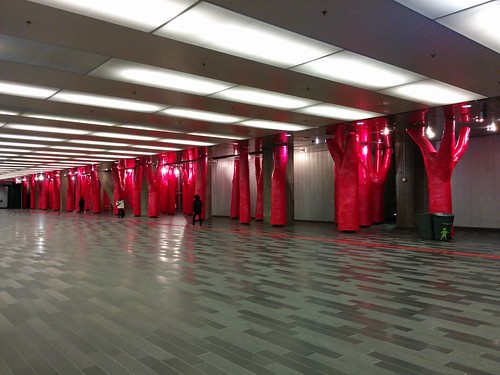 This installation on the ground floor of the Palais des congrès is eyecatching. 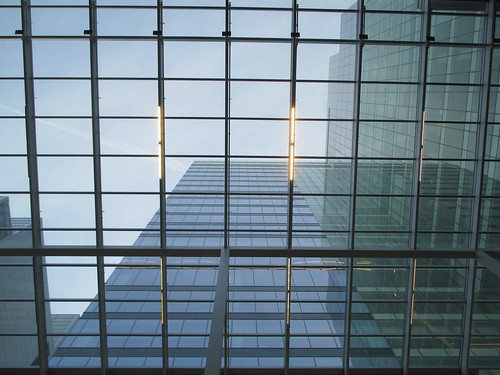 The glass architecture of the MaRS Discovery District can be enlightening.

Global News' David Shum describes how, this summer, the Queen streetcar line will be replaced by buses.

For the first time in TTC history, transit riders will have to make due with buses along the entire 501 Queen streetcar route this summer.

From May 7 to Sept. 3, streetcars will not be travelling the busy corridor due to a number of construction projects.

“Because of a number of construction projects along Queen Street that would disrupt regular streetcar service, it was decided that replacing them with buses would allow for a better customer experience in the short-term,” TTC spokesperson Stuart Green said.

In total, 65 buses will be replacing 27 streetcars from the Neville Loop in the east end to the Long Branch loop in Etobicoke.

The Globe and Mail's Oliver Moore reports on how costs for the Scarborough subway are estimated to be spiraling up even as the numbers of potential users are falling. This Scarborough line simply makes no sense at all, apart from the political that is.

The projected cost of redesigning Scarborough transit around a new subway extension continues to rise, even as the number of new riders the project will attract has plummeted, according to a number of reports released Tuesday.

The latest information on the controversial project puts its cost at $3.35-billion, provided city council follows the staff recommendation for a more expensive underground bus station option that would add $187-million. The whole project was priced at only $2-billion a year ago, when the plan to go from a three-stop to a one-stop subway emerged.

The growing subway cost reflects ongoing analysis and is likely to continue to change. A staff report said the final price is likely to be within 70 per cent and 150 per cent of the current estimate. Council will be asked in March to push the project forward, with a round of more detailed reports from staff expected late in 2018.

Based on the most recent cost and ridership projections, the city will be spending approximately $1.45-million for each new rider the subway extension attracts.

“It’s madness,” said midtown Councillor Josh Matlow, who has long supported an LRT instead for Scarborough and argued Tuesday that Toronto has its priorities skewed. “It’s clearly a reckless use of the limited tax dollars that the city has.”

The Toronto Star's Ben Spurr reports on the latest in the struggle for the control of the TTC workers' union.

The National Post carries this Canadian Press report on the latest regarding the search for the suspect who attacked a fare collector at Dupont station five years ago.

Toronto police say a suspect who shot a TTC fare collector in the neck five years ago had held up the same subway station twice in the months leading up to the attack.

Staff Insp. Mike Earl says no other similar robberies were committed after the shooting, which took place at Dupont subway station on the evening of Feb. 26 2012.

Earl says the case is “very unusual” and all investigative leads have now dried up.

Police are asking for help in identifying the suspect, who is described as a heavyset white man or woman in their 30s and likely left-handed.

TTC spokesman Brad Ross says the fare collector, who survived the shooting, is still on disability leave after experiencing “medical issues” during recovery.

CBC News' Kate McGillivray reports that this February just past is the warmest Toronto has been ever recorded as experiencing.

"It also had the warmest February temperature ever, up to 17.7 C on the 23rd," which broke records going back to the 1840s, he told CBC Radio's Metro Morning.

The month didn't start off this way.

"We had temperatures at -12 C," said Phillips. "We had a month's worth of snow in the first ten days."

After that, the jet stream, a narrow band of strong wind, moved "almost into a summer position, well north of us in Northern Ontario. It allowed the warm air to just flood into Southern Ontario," he said.

All that warm air led to 12 days in a row with melting record temperatures. "So clearly, the look and the feel of winter disappeared in February," Phillips said.

Reuters reports that just under two years ago, Argentina's Esperanza Base on the tip of the Antarctic Peninsula recorded a record temperature akin to that of a warm spring day.

An Argentine research base near the northern tip of the Antarctic peninsula has set a heat record at a balmy 63.5° Fahrenheit (17.5 degrees Celsius), the U.N. weather agency said on Wednesday.

The Experanza base set the high on March 24, 2015, the World Meteorological Organization (WMO) said after reviewing data around Antarctica to set benchmarks to help track future global warming and natural variations.

"Verification of maximum and minimum temperatures help us to build up a picture of the weather and climate in one of Earth’s final frontiers," said Michael Sparrow, a polar expert with the WMO co-sponsored World Climate Research Programme.

Antarctica locks up 90 percent of the world's fresh water as ice and would raise sea levels by about 60 meters (200 ft) if it were all to melt, meaning scientists are concerned to know even about extremes around the fringes.

Digital Journal's Karen Graham reports on how the collapse of the permafrost in the Arctic North of Canada threatens further climate catastrophe.

hawing Arctic permafrost are slumping and disintegrating, sending rivers of carbon-rich mud and silt into waterways. This will lead to a climate-driven geomorphic transformation of our ecosystem.

A study published in February 2017, in the journal Geology, titled "Climate-driven thaw of permafrost-preserved glacial landscapes, northwestern Canada," describes the research efforts and findings made by scientists with the Northwest Territories Geological Survey in assessing the increasing intensity of permafrost collapse in the Arctic regions of Canada.

Many readers may remember the July 2015 collapse of a small, unnamed lake in the NWT, documented with a remote camera that showed it falling off a cliff and breaking through a melting earthen rampart.

Thawing permafrost has already caused noticeable changes in the landscape in some Arctic regions and scientists have been tracking temperature changes and thawing of the permafrost for years. When permafrost thaws, large thaw slumps develop, some of them impacting over 30 hectares (74 acres) in area. This can dramatically alter slopes and impact downstream environments.

In 2015, Steve Kokelj of the NWT Geological Survey told the Canadian Press the thaw slumps were getting bigger and more numerous with the increase in temperatures and rainfall. At that time, Kokelj estimated the land affected by slumping had almost doubled in the last 30 to 40 years.